Delfina Cuero: Her Autobiography, an Account of Her Last Years, and Her Ethnobotanic Contribution 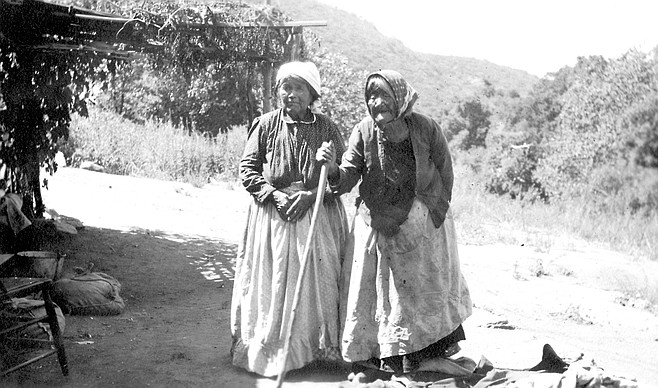 Delfina Cuero told her story to prove she once lived in San Diego — and thus could return to the country, from Mexico, as an American citizen. A Kumeyaay Indian born in Jamacha around 1900, Cuero grew up on the coast. Her family lived, hunted, and gathered in Mission Valley, Torrey Pines, Ocean Beach, and around Mission Bay until American settlers populated the region, forcing her family to the backcountry and eventually into Mexico. Since they never owned land, were never attached to a mission, nor even “squatted” for long periods of time, Cuero’s people had no record that they were ever here.

“We went farther and farther from San Diego looking for places where nobody chased us away.... My grandparents crossed the line [into Mexico] first. In those days we didn’t know it was a line, only that nobody chased them away from Ha-a [Kumeyaay village 20 miles south of Tecate).... Later we went down there, my mother, father, and I. I was big, but not a woman yet.”

During their retreat from the coast, her family lived “where there was work or wild food to be gathered.” Though he spoke no English, Cuero’s father worked for ranchers, who paid him in food or old clothes, never money. “We didn’t know what money was in those days.”

They camped in small canyons near the ranches — they never lived in a house — and their neighbors were other relatives camping close by. “My father would pick a place where the wind couldn’t hit us. In those days there was water in places that are dry now.”

Though they never had much time for play, Cuero and the other children enjoyed games of hockey and archery. They made homemade rag dolls, filled with manure and sticks for legs. Or they’d climb tall rocks and jump, “to see who was brave.” Most of all, they wrestled. “I used to throw Juan Calles and all the boys and girls when we were little. The girls just had one dress and we’d fight. I’d throw them and the dress would tear and they’d cry and cry.... I tore my dress too, but I sure liked to wrestle.”

While the whole family gathered acorns and pine nuts (the latter from Torrey Pines and Sierra Juarez), women and men had different tasks. Women sought wild greens, seeds, and fruit. They also made ollas (a round earthen pot or wide-mouthed jar) and baskets. The men hunted for game and honey and gathered agave. “Some Indians made necklaces of shells, but we didn’t. We always needed more food; we were poor and never had time for necklaces ” Cuero considered herself too lazy for women’s work. “When I was young I was different.... I never took time for ollas and baskets. I’ve always worked like a man. I’ve had to cut wood. I still do at my age. I guess I’m just too lazy to sit in one place.”

Helen Hunt Jackson’s Ramona (1884) — one of the most anti-American bestsellers ever written — details the exile of Southern California tribes. For decades, Cuero lived that life, homeless and always in transition from the old ways to new, unwanted ones.

Often she speaks of the past in half-memories, recalling taboos now fading from the landscape. Mission Valley once had almost as many rattlesnakes as fleas. But it was bad luck to kill a snake, “lust get out of the way.... If a person who has been bitten goes into my garden, all the plants will die.” Pregnant or menstruating women should avoid that person as well. On the plus side, someone bitten by a snake or black widow spider could have a much better garden than before.

A Snake Man, who learned his powers through dreams, could not only cure snakebites, he knew the next victim in advance. Snakes would “come and talk to him and tell him when they were going to bite someone. Then he could be already on his way to the person.”

Witch doctors also got power from dreams. “They didn’t have to touch you to put something in you.” “Good” ones would “quietly heal anyone who happened near.” “Bad” ones could make you sick, especially if you didn’t give them enough food. “I’ve never been mean, so I didn’t have to worry. But we don’t have witches anymore; nobody dreams power like that.”

Cuero’s parents separated, yet she never knew why. Later, she married Sebastian Osun (“wasn’t much of a talker, but a real good man”), whom her parents had picked for her. The erasure of Native American culture, which began in 1769, had become so devastating that, when Cuero had their first child, she didn’t know she was pregnant. Initiation ceremonies taught “the special things” young women had to know, like pregnancy and giving birth, “but they had already stopped having them before I became a woman.”

One day, far from home, she felt severe pain. “Then the baby came. I couldn’t walk anymore and didn’t know what to do.” Friends carried her back home, “but I lost the baby.” Then her grandmother “taught me about what to do and how to take care of babies.” Shipek writes, “Europeans did not realize they were destroying anything more than ‘false religion’ in its narrowest sense. They did not know they were destroying the total educational, moral, and ethical system |of the natives. Many of the presently old women in this region had lost their first child…and none had gone through the initiation ceremony.”

Cuero and Sebastian had been together more than a dozen years and had several children when a horse threw him and he died. “I cut my hair off, all real short. That was the Indian way. Then let it grow out again. Then we had to burn everything that belonged to him — the grass house, everything. Only when everything is burned can his spirit go to the next world and not have to keep coming back after his things.... It has to be done mostly because his spirit can’t leave but is troubled and keeps returning for anything you keep.”

For decades after her husband’s death, Cuero wandered like a restless spirit, always in search of food and shelter. The Autobiography details her relations with men (“I was beat so many times”) and courageous struggle to survive: “The terrible things I went through trying to keep my children together and fed.... Then I didn’t succeed after all. I feel like crying when I think of that time.” The Autobiography of Delfina Cuero may be the most moving account of a life ever written by a San Diegan.