Foreseeing San Diego on its knees

San Diego County — indeed all of California — is an orthopedic basket case. For millions of years, the ground beneath us has been shattered by slow but sure, incremental changes that can be read, by subtle observations, in the jumbled topography existing here now. Tectonic forces have bent, broken, displaced, and distorted our county's granitic bones; fractured its backbone (the Peninsular Range of mountains); sliced and crumpled its sedimentary skin; and altered the circulation of its surface water.

While California's most wrenching and violent movements tend to take place east and north of here, close to the great San Andreas Fault, even coastal San Diego bears the obvious marks of a landscape broken into sliding strips during geologically recent time. Faults with monikers such as Coronado, Silver Strand, Rose Canyon, Florida Canyon, and Texas Street cut north-south across the geologist's maps. Most are considered to be relatively moribund, but not so the Rose Canyon Fault, which may muster a magnitude 6.5 or 7 earthquake sometime in the next few centuries. The Rose Canyon Fault is thought to be the extension of the historically active Newport-Inglewood Fault — the culprit in a damaging 1933 earthquake centered at Long Beach. 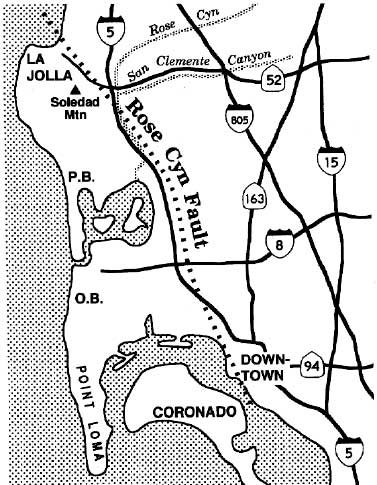 Fault traces are tough to spot in the paved-over urban environment; however, the following excursion may increase your understanding of the Rose Canyon Fault: Start at Soledad Park atop Soledad Mountain. The inclusive near view encompasses La Jolla Shores in the north, where the fault makes landfall, and a fault-underlain section of Rose Canyon along Interstate 5 to the south. Farther south, the fault slices across the slopes in Bay Park, just east of Mission Bay, continues along I-5 into downtown San Diego, and finally goes under San Diego Bay.

The land west of the Rose Canyon Fault has been creeping north, in fits and starts, relative to land on the east. Soledad Mountain itself has been thrust upward on the west side, which is why the normally east-west-trending drainages of upper Rose Canyon and San Clemente Canyon join, veer south, and follow a path of least resistance to Mission Bay. From Mission Bay south, the land west of the fault has sunk; water from the Pacific Ocean has invaded to form south San Diego Bay.

Next, visit Tecolote Park and Recreation Center's south baseball diamond, which is tucked into a steep alcove of friable rock. Behind center field, outside the diamond's fenced rim, you'll discover an interpretive sign. It marks the boundary between half-million-year-old, dark-beige conglomerate rock on the right, and 50-million-year-old, light beige sandstone on the left. Your two feet straddle a strand of the fault that may one day bring urban San Diego to its knees.