My mother didn’t think much of all the “crap” he brought home. 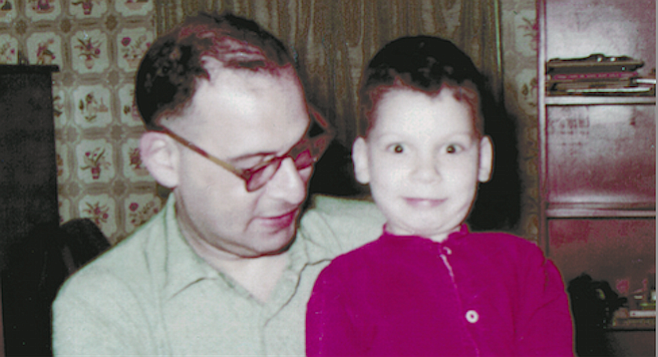 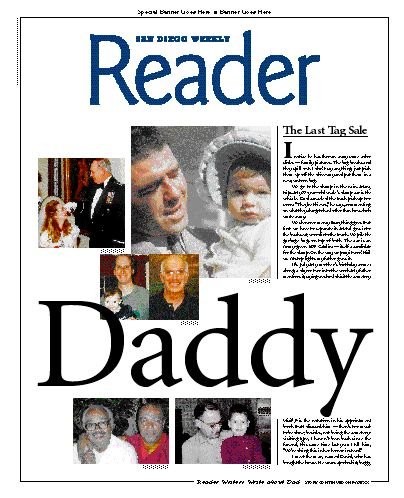 He is old, now, my father. If he were a Toyota Corolla he would have well over 200,000 miles on him and you’d be wondering just how soon the old heap was going to seize up and come to a shuddering, terminal stop by the side of the road. My father was never much on cars, so perhaps it’s an unfortunate analogy. He wasn’t much on a lot of the standard fare for American dad-dom. Had tools but don’t remember him fixing anything. Never watched sports; thought they were okay to play but only idiots watched them for entertainment. I remember him coming to a Little League game where I pitched a no-hitter. He didn’t even know when the game began or ended. Had his head in an Atlantic Monthly the whole time. There he was, alone in the stands, well after the game, when I walked up to him. “Did you win, sweetheart?” he asked me.

You could, though, get my father to sit still for the fights. He liked fights. He’d even listen to a radio broadcast and shush me. It seems he got into a lot of fights as a kid. He urged my brother and me to fight; at least he didn’t discourage us. In fact, he wanted to know all the details of any punch-up we got ourselves into. After dinner every night the routine was for my father to get on his knees and for me to have at him, tooth and claw. Usually, it would end with me in tears and my mother hollering. I believe the object was for me to learn to keep my hands in front of my face while I kept on comin’ on. Thirty-five years later when I turned up at my parents’ 50th wedding anniversary with a black eye from a bar fight the night before and offered that someone had opened a door in my face, my father smiled mirthlessly and asked to see my knuckles. But I suspect he was secretly pleased. My mother was not.

My father came home directly from work every night. I’ve never seen my father drunk. He enjoyed a glass of bourbon, sometimes several, but drink only made him more relaxed and charming. I can’t recall my father ever making a pass at a woman, at least when I was around. He admired at least one of my girlfriends quite a bit, but that only evidenced itself in an overblown courtliness that amused my mother, less so me. I’m almost certain my father never cheated on my mother. They had their knock-down-drag-outs, but it always blew over. He was a straight arrow in such matters, or so I believe. He never discussed sex with me. And when it was evident that I’d started having it, he never said one thing or another. When I was 11 or 12 my mother sat me down at the dining room table and said, rather irritably: “And don’t believe her if she says she’ll just take a bath and it’ll be okay.” That was my birds-and-bees lecture. I think I was well into my 30s before I figured out what she was getting at.

I was an accident, arriving six and a half years after my brother. My sister is eight and a half years older. My parents had taken some friends from around the corner out to dinner because the couple was getting ready to split up. The plan was to get them good and drunk and maybe they’d patch things up. The result was my mother got pregnant and their friends got divorced. I don’t know that my mother ever forgave me, but it seems, at least when I was small, I was my father’s favorite. At any rate he never went after me like he did my brother. My father had a violent temper. The victim was customarily the house, not any of us. We would hide in the bathroom while he tore shit to pieces. He’d rip paintings off the wall and put his foot through them.

That was a large thing for him to do because he was an amateur collector and really loved those paintings; had them restored; found lovely antique frames for them; researched them and the artists who painted them in encyclopedias and art books. He never finished high school, just went off and joined the Merchant Marine. That’s how he spent the Depression. Not a bad idea, in retrospect. He probably would have continued in that life had he not, like his father, gotten into the retail trade and met my mother.

His mother, Nanny Gussie, was a collector. I guess that’s where my father caught the bug. I never met her; she died before I was born. But that’s who I’m named after. She was apparently a sweet woman. My father liked nothing better than to go to New York and visit the museums. Because I was the baby and we got on, he dragged me along. I have on the wall over the desk as I write this a postcard reproduction of André Derain’s London Bridge from 1906. It was my especial favorite at the Museum of Modern Art when I was only a small child. That and Henri Rousseau’s Sleeping Gypsy in the lobby.

My father liked the Frick Museum. His father, not long after he came over from Hungary, used to deliver hats to Mr. Frick at that address, early in the century. We’d go uptown to the Metropolitan and the Whitney too. My father liked the Ashcan painters and Edward Hopper. He liked bronze bodhisattvas and prints. The house looked like the collections room of an art museum, especially after all of us were grown and out of there. By that time he’d stopped tearing shit apart and breaking stuff. Maybe the two things were related. My mother didn’t think much of all the “crap” he brought home. When he wasn’t looking, my mother would put the bodhisattvas and ceramics in the dishwasher. That would usually get a rise out of the old man. He liked to bury artifacts in the backyard for a few months, until they aged. He’d also try to paint phony patinas on things. My father was given to reading books by famous collectors or about art forgery. I think he fantasized he was sort of a low-rent New Jersey Medici. I know he relished telling everyone how he made these great finds in antique stores and walked off with rare treasures for only a few dollars. I always cringed when he haggled with the antique people. To this day I can’t bring myself to haggle. But I do like paintings.

My father was good at making big scenes in restaurants. This was chiefly because he was hungry and the waitress or waiter was not moving fast enough. I dreaded these scenes as well and as an adult am incapable of challenging even the lousiest or most supercilious service.

What impresses me in hindsight is that none of his rages was ever fueled by drink. Whiskey only made him nicer. I’m not sure why he was always blowing his top. Self-knowledge was never one of his strong suits, still isn’t. He would claim as malicious fantasy much that I’m writing about him. Now we have words like denial and dysfunction. I find them amusing, given the household I grew up in. My mother and father probably think of themselves as model parents. In my experience, parents are always congratulating themselves for their excellence in child rearing. I don’t think I’ve ever heard a friend of mine say, “You know, I’m not much into being a parent and I’m probably doing a rum job of it.”

My father is a nice man. That’s what almost anyone would say about him. Me too. Smart as well. The folks were always reading books. They thought I was maybe retarded because I watched TV so much. There wasn’t really TV when my older brother and sister did much of their growing up. I remember very well my father bringing the first TV home, in ’54 or ’55, and it was a source of endless fascination for me. Which, in part, is why they’re a little perplexed that I grew up to be a writer. My father wrote as a young man, for newspapers and magazines. He even had a humorous column in a men’s retail monthly. His style was a bit like S.J. Perelman. My father painted too, for about ten years. In the basement. First in the style of the fauves, like Derain, then more abstractly, somewhat in the manner of Kandinsky and Klee. When my brother died he stopped.

My father never quite forgave me for becoming a writer. It was a cultivated hobby, but nothing to give one’s life over to. Only the feckless, misfits and drunkards, write and paint as a career. He was clearly conflicted about all of that. When it was too late for me to change course, my parents hoped that I would take a university job. No one arouses my father’s contempt as much as university professors. He thinks they’re worthless, pompous clowns. He’s probably at least half right. When he sees me, my father still can’t help himself from volunteering, “Your mother and I always hoped some institution would take you in and look after you.” I think he means a university, but I’m not sure. He’s trying to be helpful, I suppose. Because he loves me. As I love him.

This article is part of the Father's Day issue. To read additional articles from this issue, click here.