Northern Light and its customized folders

The importance of usefulness to a search engine

I’m no economist, or so my creditors say, but long before Steve Kroft’s report on 60 Minutes on December 10 about the bust up of the dot-com industry and the billions in fool’s gold that financed the vast, revolutionary industry, I often found myself wondering how in the hell all these sites were going to make a penny. Cash from first-round, second-round, and third-round funding, all the CEOs admitted, was financing startup and “branding” costs. So, great, everyone knows what Expedia, Kozmo,and Yahoo stand for, but now what? According to vulture capitalists and repo men, layoffs, bankruptcy, and office-furniture auctions is what.

Did investors really think people would stop reading the newspaper, stop reading books, stop calling Southwest, stop using real money and trade instead in something called Flooz? Kroft’s was a good report, I think, and long overdue. At the very least, it vindicated those young people like me who never got into the business and tortured themselves by wondering if I they were missing the boat to early retirement.

I know plenty of people who have always found the Web an empty place — a place even more frustrating than the endless aisles at Vons and Longs Drugs, where one freezes in front of soaps and toothbrushes. I hate the 15 minutes I waste I trying to decide what’s more important for the long-term health of my teeth — an angled brush, a rubberized grip, soft bristles? — but I hate those minutes less than the ones I waste trying to find travel and consumer advice online. 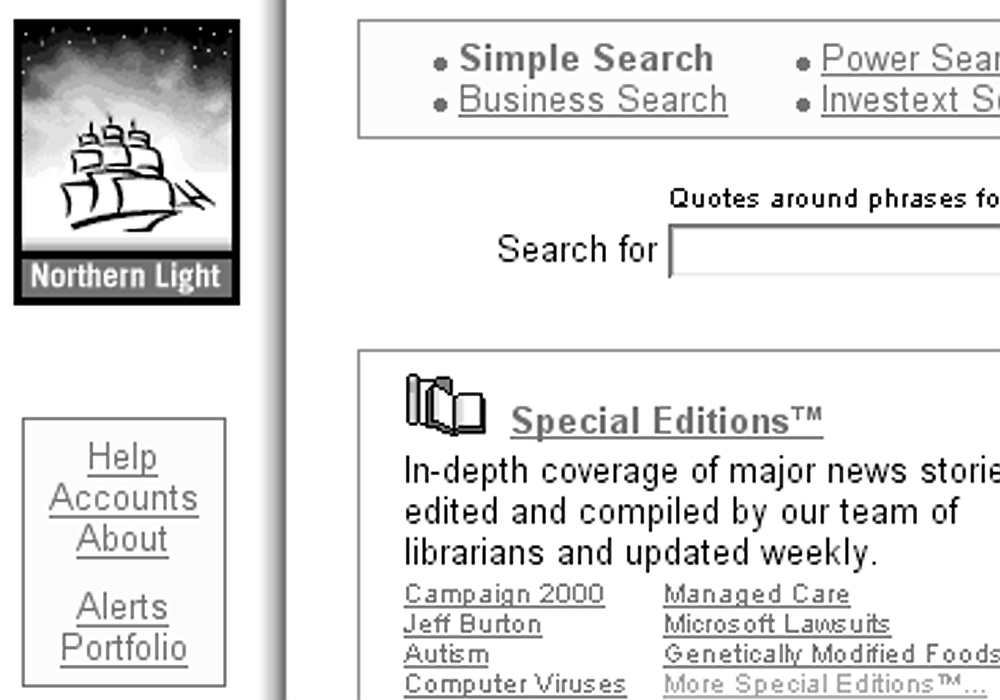 Northern Light has best search engine, if the volume and inventiveness of query returns is any indication.

In search of an answer, I conducted an experiment. My tool was Northern Light (https://millie.northernlight.com/dashboard.php?id=93&fid=0), what I consider the best search engine, if the volume and inventiveness of query returns is any indication. Northern Light divides search returns into customized folders, the idea being that it’s user-friendly to mimic the way the most common operating systems organize data. (During a night of excess at a bar in Providence, Rhode Island, a friend of mine who works as a low-level software engineer and who once worked at Northern Light told me in a hushed, confidential tone that it was he who came up with the idea for the customized folders. Naturally, one of his higher-ups took the credit. “To getting screwed,” we drank.)

At Northern Light I entered search terms for what I consider some of the most pressing questions of our time. My girlfriend and I have long wondered who invented the waffle shirt, those dimpled undershirts that wear to an uncommon softness and comfort. I started simply, with the term “waffle shirt.” I got 64 items in 34 folders with peculiar titles like autobahn.ca, kiddy-basics.com, rowersworld.com, and composers. The second site listed was called Waffle Shirt (cyclenet.co.uk/html/leisure2.html). Promising, but the link was dead. The fourth site, also called Waffle Shirt (www.wolfhaven.org/zzwafleshrt.htm), was a catalog entry for something called a “cream ‘waffle weave’ Henley shirt.” Heavyweight, 80 percent cotton and 20 percent poly-blend. Hideously ugly; $52.95. Next, a site selling the Hummer Crewneck Waffle Shirt (www.autobahn.ca/Hummer/HUMM-WFLE.htm), $39. In the Transportation Industry folder, I learned that Porsche and Chevrolet also sell waffle shirts with their logos. The Rap and Hip-Hop folder held one item, an expired link to a Beastie Boys fan page. No clear connection to the origins of the waffle weave.

So I searched for “waffle shirts” AND invention — “your query did not find any documents.” I tried “waffle shirts” AND history. The more refined terms led me to the Ultimate Basketball Movie List (www.members.home.net/hero-hilUbballmovies.htm), which has capsule reviews of every movie that has anything to do with basketball. Hoop Dreams, Basketball, Teen Wolf, Celtic Pride, Senseless...

I’ve also been thinking quite a bit lately about heat shields, having just paid $913.38 to have them replaced on my Subaru. I figured they protected some part of my car from the heat generated by another part of my car. But why, I wondered, did my y-pipe and oxygen sensor have to be replaced just because my heat shields were falling off? A search for “heat shields” yielded 16,324 items in folders on NASA, physics, jewelry, missile technology, clay, and something called ablation — a word not in my lexicon. My American Heritage Dictionary defines ablation as (1) amputation of a body part and (2) reduction or dissipation, as by melting.

I went for “heat shields” AND Subaru. Item number four was a score: Subaru Legacy Reviews (car-review.com/reviews/mid-size_compacts). Mine is a ’93, but here’s what one reviewer reported about the 1995 Legacy L Wagon (AWD) — “Strengths: solid, good price, torque and consistent acceleration: Weaknesses: front seats lose support over time; we had to have something in the exhaust system replaced — I’m pretty sure it was a heat shield that corroded; it started rattling when the Subaru had 50,000 miles; the dealer said this happens all the time on the Legacy; weak engine on the L model.”

That was kind of useful, so, emboldened, I let it fly, really stretching my search terms: meaning AND life. Almost two million returns in folders on geology, Plato, Egypt, Islam, and psychotherapy. At the top of the list was a site on baby names — girls, A-M (www.cfim-ages. com/Products/Baby_Sh op/Baby_names).

But I was more in a meaning NOT life mood, which got me lots of sites on birds. Hawk Talk (www. the-rrver.cotn/Public/raptor/hstmsgs/ 968624956.arc.html) and Eagle Vocabulary (webhost.brid-gew.edu/jhayeAoh/TRIPS/EAG LES/EAGLE_ VOCABU-LARY.htm) topped the returns list.

When a bird “broods,” it’s sitting on eggs, and a “crop” is the pouch in a bird’s throat.

And so, to the point: Web AND usefulness. Here it was, at a site called Mining Usefulness: A Philosophy of Function (www.geeknews. orgjfea-tures/articles/uselfulne$s.html), an advocate in the open-source movement, which maintains that programmers should be allowed to read, redistribute, and modify software on the Internet so that it might evolve more perfectly. “We in the open-source community,” Leon Brooks writes here, “have learned that this rapid evolutionary process produces better software than the traditional closed model, in which only very few programmers can see source and everybody else must blindly use an opaque block of bits.”

Brooks concludes, “Usefulness as a principle can be seen in many of the world’s major philosophies, in action if not expounded in principle. Usefulness (necessarily without direction, in the case of atheists) is the heart and soul of the naturalist evolutionary movement — if you’re useless, you’re dead.”