It's difficult to get away from Saddam Hussein 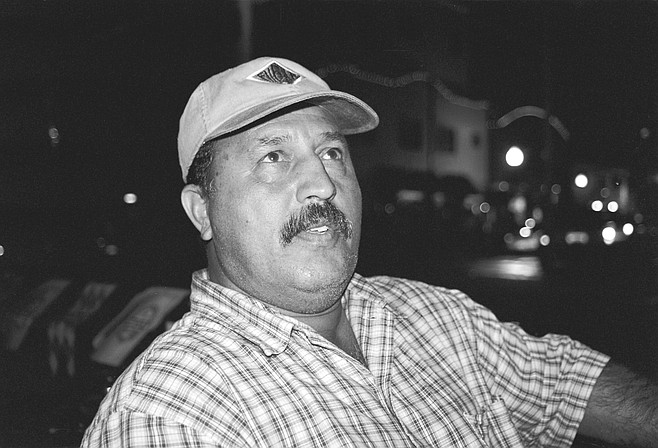 Most of the Arab-speaking cab drivers who wait in front of the zoo or down at the Santa Fe Depot know Sam Alsiadey. "He's had a hard life."

"It's amazing what that man has lived."

"It's amazing that he has survived."

"A very difficult life, but God has given him a beautiful daughter."

"God has given him an angel. A diamond."

"Any man in this world would want her to be his wife."

Alsiadey is a thick-chested, broad-shouldered man who once served as a bodyguard for Saddam Hussein. He's a serious fellow. His eyes are a little sad. When he talks about his daughter, Tina, he smiles.

"She is so intelligent, so smart. She's learning to work on computer. All her teachers say she is such a wonderful girl. But, you know, it's hard for her sometimes in America. Also hard for my wife. The culture is so different."

As Alsiadey talks, he absently massages his right shoulder, just above the area where he was shot. There are also scars on his lower back and abdomen where he was stabbed.

Alsiadey was the second of nine children born to a Baghdadi police captain who had a nice home on a half acre of land 35 miles outside the capital. Alsiadey and his brothers liked sports -- Alsiadey was drawn to weight lifting, his brothers, soccer. Kareem Kidem, his second brother, became a professional soccer player and is famous throughout the Middle East and Europe.

"I didn't like to play soccer too much. I liked organizing and managing teams. I also liked going to the gym. I got very big, very strong. There weren't so many big strong guys in Iraq, and so Saddam Hussein's security service was always looking for strong guys to work as his bodyguards. You looked big. You looked frightening, like you might kill some people. I didn't like the work. I served for only a short time, maybe two or three months. I had no choice.

"What I wanted to do was have a farm. Where I grew up outside Baghdad, it was very beautiful, very rural. People had cows, sheep, chickens. Growing up, I liked it very much. So I went to agriculture school and got a degree in agricultural engineering. I traveled several times to Greece to study farming methods there. This turned out to be a good thing later in my life.

"In 1978 I had some political troubles in Iraq, so I crossed the border into Syria. At that time, it wasn't difficult to do. I took my young wife with me to Damascus, and I worked there for a short while as an inspector for public works. I was working for the Syrian government. Relations were good between Syria and Iraq, but the Iraqi government didn't like people to leave Iraq. It looked bad. And so there were many Iraqi spies in Damascus, many undercover men. People would meet you and be nice to you and pretend they were your friend. And they'd start to ask you, 'Why did you leave Iraq? Why don't you go back?' Damascus wasn't safe for me. My wife and I had to leave.

"Syria has a very narrow border with Turkey, and my wife and I managed to get across. It was a very dangerous area. And there we were, walking, walking, walking. Finally, we came to a small village, and I find this man who speaks a little English, and I ask, 'How far to Ankara?' Ankara, you know, the capital. And he says, 'Two days.' And this is a very serious situation, because the area wasn't safe. For me, a man alone, it would have been different, but I had my wife with me. So we keep walking, walking until we come to another village and we found a bus. We didn't care where it was going, we just got on. It took us ten hours to get to the next big city. And from there we went to Ankara, and from Ankara we went to Istanbul. The Turkish government would only give me a visa for 14 days. My wife and I were frightened that I would be sent back to Iraq.

"After two weeks in Istanbul, I didn't know what I was going to do. I thought, maybe I can go to Greece, because I'd visited there several times. So I go to the Greek embassy, and there were 2000, maybe 3000 Iraqi people there, refugees like me. People waiting in a huge, long line. People trying to get away from Saddam Hussein. He had just taken control of the government. It was nearly impossible to stay in Turkey. There was a big business in Greek visas. There were men selling Greek visas for $1000. I went back to the embassy the next morning. I cut to the front of the line. I got in and started talking with an embassy guy. I showed him that I knew a few words in Greek. I said I loved Greece. I told him that I and my wife wanted to go to Greece just for a short while. For our honeymoon. He believed me. He gave us visas.

"But it wasn't so easy to get away from Saddam Hussein. His government, you know, was very, very paranoid. They followed people everywhere. And so one day I was sitting in an outdoor café in Athens, and these two guys drive by on a scooter. I hear this popping noise. Pop! Pop! Pop! And I feel something in my back, up near my shoulder, but I don't know what it is. I guess I stood up and the guy riding on the back of the scooter saw that I wasn't dead and so he comes back. He jumps off the scooter, and he comes back and he stabs me, in my back, my side. I was losing so much blood. I was lucky I was so strong, because I hit him. I knocked him to the ground. I was afraid if I didn't kill him he'd stand back up and stab me again. I took a bottle and broke it against the table, and I stabbed him with it.

"The Greek people are very nice, very good-hearted people. When they saw what was happening to me, that I was losing so much blood, they called an ambulance. I was taken to the hospital. They operate on me from 8:00 at night until 4:00 in the morning. They had to take out my spleen. They took out a rib. I lost a lot of blood. It was a complicated operation. My poor wife was there. She was so worried. We'd been through so much. She was very young. Maybe a little older than 17. And she was so worried about what happened to me that she had a miscarriage. She was three months pregnant. She lost twins, two girls. Thank God, five years later, God was very good to us and he gave us our daughter.

"There was a Greek man I met, and he had worked in America, and he said he knew what it was like to be an immigrant. He wanted to help me. He had a friend who had a farm who needed someone to live on it. I said, 'I studied agriculture. I am the perfect man for the job. I am a doctor of trees and grass.' So I and my wife ended up living on this man's farm for eight years until 1985 when President Reagan did something wonderful. President Reagan said America would accept all Iraqi refugees. They could come to America with no sponsor. The American government gave us plane tickets. A church organization for refugees helped us settle in. They gave us a check for $900. They helped us find an apartment.

"So I came to San Diego, and I worked at a lot of small jobs. Menial jobs. But I always saved my money. I finally got to open my own business, a pizza shop. And then I had several shops. I even had a shop in Arizona. But that business went bad. So I worked. I saved money. I opened a 99-cent store in Escondido, and that went bad. So now I drive a taxi. I work hard, try to save money. I get up at 5:00 in the morning and work until noon when I go home for lunch. I go back to work at 2:00 p.m. and work until 10:00 p.m. I have to pay about $30 a day for gas, about $280 a week to lease my cab. If, at the end of the day, I've made a little money, I thank God.

"I don't want my wife to work. American culture is difficult for Arab women. There's not much respect for women here. Men use bad language in front of them. They talk about sexual things in front of them. I worry about this for my daughter. She is so shocked by the way Americans talk, the language they use. The things they talk about. It's just not the way she was raised.

"But I'm very glad to be here. I'm free. I'm free. You know what it's like to say that? Do you know what it means? The Iraqi people are like slaves. Here we are free. When I was a little boy, I dreamed about coming here, but it seemed so impossible. And so I'm here. I haven't been to Iraq for more than 20 years. My poor mother died. I didn't get to see her. Some of my brothers now have grandchildren. I know none of these people, and that sometimes makes me very sad.

"So I'm here and I'm free and I'm working, working, working. Every day. Working. Trying to save a little money. I have these dreams. I'd like to bring my brother here, the soccer player, so he could play for a big American team. He's so talented. And I'd like to have another business of my own. God has given me my health. Maybe I'll try again."