Is San Diego losing out to Central Valley as meth capital? 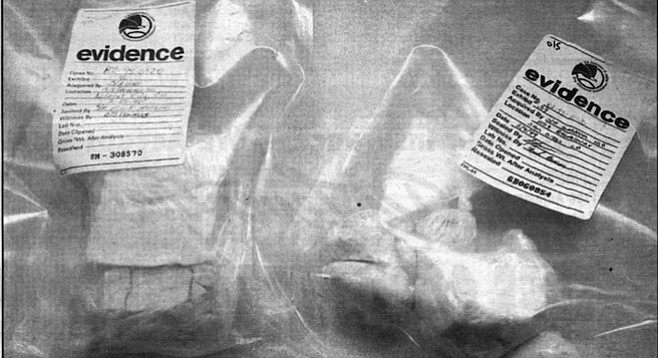 What's cooking? If you're in San Diego, more than likely it's meth. By the "Nazi" method. Dry, odor-free, small-scale, impossible to catch. And if you're selling, you'll still have more customers than anywhere else in the country. 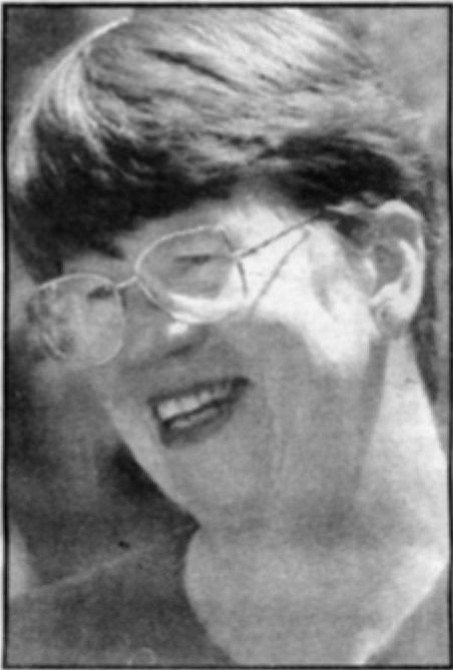 Attorney General Janet Reno called for the study to prepare the rest of the country for the problem San Diego gave birth to.

That's if you believe a San Diego Association of Governments-organized study based on questionnaire responses from detainees who have been arrested in five cities: Los Angeles, San Jose, Portland, Phoenix, and San Diego. On a guarantee of anonymity, the suspects in police custody supplied personal drug information and urine samples to the Arrestee Drug Abuse Monitoring program (ADAM), a study sponsored by the justice department's National Institute of Justice.

Attorney General Janet Reno called for the study to prepare the rest of the country for the problem San Diego gave birth to. She asked SANDAG researchers to do the job.

"Actually, I don't believe this is the meth capital of the world anymore," says Susie Pennell, director of the criminal justice research division of SANDAG and the main writer of this report. Pennell says it's not that San Diego's methamphetamine usage is going down so much as other places', like San Bernardino's, are going up. "The Central Valley," she says, "is where it's at."

Pennell acknowledges that the study is skewed because its subjects, the suspects in police custody, are likely to use drugs like meth more often than Joe Average. Urinalysis showed that 74 percent of all those arrested in San Diego were positive for some drug in their system; 95 percent of admitted meth users were positive.

But the study does show trends as to what's happening to meth use in San Diego. And the news is good and bad. The good: The number of men who were high on meth when they were arrested between 1997 and 1998 was down to 34 percent compared with 40 percent the year before. Only 35 percent of women arrestees were using meth at the time of their arrest, compared with 45 percent the previous year.

The bad news is these percentages still leave San Diego way ahead of neighboring cities. When 40 percent of San Diegan arrestees had meth in their urine, only 21 percent did in San Jose, 18 percent in Phoenix and Portland, and 7 percent in Los Angeles.

And those figures just begin to tell the story of what's happening in San Diego. The report says that 62 overdose deaths were associated with methamphetamine in 1997, the highest ever reported in San Diego County. Additionally, meth treatment hospital admissions in 1997 rose to 3855, a third of all admissions in the county.

"They throw a number around San Diego County that the government expends $1.8 billion a year on alcohol and drug abuse," says Pennell. "How much is due to meth, I don't know. This is county money. Alcohol and drug violations constitute almost half of all the county's arrests."

How do San Diegans take their meth? Forty-two percent reported smoking the drug, 39 percent snorted it, and 18 percent said they inject it.

Portland users, on the other hand, were far more likely to inject (49 percent). Juvenile users overall were more likely to smoke (50 percent). "Both injecting and smoking result in the drug getting to the brain more quickly. About one in four users stated that they use meth four or more times in a typical day."

Meth is popular because it inhibits hunger, it keeps you awake, it makes you feel good, and jazzes up sex. But does it make you crazy, violent, paranoid? Remember the guy on the wild bus ride? Remember the tank driver? Remember the couple who scalded their niece to death? All high on meth.

Yet the SANDAG study shows for the first time that the violent image of meth users is misleading.

"About 40 percent of the adult meth users [in the ADAM study] were charged with a drug or alcohol violation," says Pennell. "About 25 percent were booked for a property offense, and [only] 16 percent were arrested for violent behavior. Nonmeth arrestees were significantly more likely to be arrested for a violent offense, contrary to a common perception that associates meth use with violent behavior."

Yet the problem with meth "is that everything bad about it is true," says Pennell. "And kids really need to know that."

For a start, she says, meth is a lot older than people think. It's known by many street names. "Boo," "chicken feed," "geep," "spoosh," "load of laundry," "tick tick," "scootie," "jet fuel," "wake me up," "lemon drop," "trash," and "schmiz" are just some of the common terms for meth. Ephedrine, an essential ingredient, was first used by the Chinese approximately 5000 years ago. Methamphetamine, a derivative of amphetamine, was first developed in 1919 by a pharmacologist in Japan. By the early 1930s, methamphetamine began to be used therapeutically when it was found to be useful in treating asthma and an epileptic seizure disorder called narcolepsy (in which the patient repeatedly lapses into sleep). More recently, the drug and its derivatives have been used as appetite suppressants and in treating certain attention deficit disorders in children.

San Diego seems to have been chosen as meth central because the original manufacturers -- or "cookers" -- of the drug were members of local outlaw motorcycle gangs who made it for themselves and their friends.

World War II was an important factor in bringing the drug here. During the war, ephedrine "waker-uppers" came into accepted use, especially among bomber pilots who had to stay awake on long flights across the Pacific. Immediately after the war, when Japan was in the depths of its defeat, methamphetamine use rose dramatically. The meth habit spread to U.S. occupation soldiers. They in turn brought it back to the States with them. And when they did return, they most often landed and settled in San Diego. Some of the fraternal groups they formed turned into the precursors of today's motorcycle gangs, such as the Hell's Angels. The meth, they said, reproduced the adrenaline rushes of their war experience. East County, Lakeside, Santee, and El Cajon have been the traditional centers for these groups and for their meth-production facilities.

In recent years, narcotics agents have succeeded in breaking up meth-cooking groups in the county, notably through Operation Triple Neck in 1989. Since then the Mexican drug cartels have largely supplemented domestic production. One factor favoring the Mexican gang is that ephedrine (a key ingredient in the manufacturing process) is not regulated in Mexico. Another is that these groups are already familiar with illicit trade routes. Adding methamphetamine to their operations was a cinch.

The report also says that local meth dealers are harder to catch than, say, crack dealers. "Typically, Mexican labs are larger and more secure than their U.S. counterparts and produce greater quantities of the drug," says Pennell.

On the other hand, the ability to cook small amounts in small places has its advantages. "Labs in the United States are often set up in houses, motels, trailers, public-storage lockers, and vans."

Often these labs produce meth on an irregular basis and move frequently to avoid detection, Pennell says. And meth users and dealers are often difficult to detect because unlike other drug buyers and sellers, they usually know each other and don't do business on the street.

The "Nazi" way of preparing meth has also made it difficult for law enforcement to detect labs. " 'Nazi method,' or 'dry cook,' uses ephedrine or pseudoephedrine," says the report, "sodium or lithium, and anhydrous ammonia. It is growing in popularity because it is quick and inexpensive, requires little setup time or equipment, and produces a high yield of the drug. 104 of the labs seized in 1996 used this method, up from 5 labs in 1995."

But that figure doesn't reflect the extent of the kitchen operations going on in San Diego, adds Pennell. Meth made the "Nazi" method (named for the way Nazi military cooks are said to have created meth to bolster their soldiers' courage) is hard to find, mainly because it gives off none of the typical "baby-diaper urine" smell associated with traditional cooking vapors. You can't smell dry batches, even nearby.

Yet for all the federal alarm bells, meth is definitely a West Coast thing, according to Washington, D.C.-based Jack Riley, in charge of the 35-city ADAM program. "I don't think meth will inevitably creep eastwards," he says. "We don't see meth use east of the Mississippi among the arrested population. In Atlanta last year, we got one meth-positive [arrest] for the entire year. We're getting nothing east of Omaha and Des Moines. Chicago, too, [shows] nothing significant."

Does Riley believe enterprising San Diegans may be able to penetrate East Coast cities? "Well, meth is cheaper than cocaine and [its effect] lasts longer. In our data set we asked people if they had ever used cocaine, and if they did, which did they prefer? We had a lot of folks who said they switched to meth because it's cheaper, the high is better, and the high lasts longer. But [creating a market for meth in] East Coast cities where cocaine is very entrenched with the drug-using population? Meth may never hit New York. It may never be an issue."

"Although this study includes only arrestees in five western cities," says her report, "the Federal Government has acknowledged the spread of meth in other areas of the country and responded by appropriating funds to address meth use before it becomes a national epidemic."

"There has not been a lot of federal attention on meth until recently," Pennell says. That's wrong, she believes, because meth is worse than even heroin. "You might be able to [maintain a life] with heroin. If you're a long-term heroin user, use once a week, maybe even once a day, people still manage to have families. They're able to get on. But that is not the case with chronic meth users. They tend to use more and more and more. Their teeth fall out. Their brain chemistry gets twisted, and their nerve endings die because not enough oxygen is getting to them."

So is San Diego's effort paying off? No, says Mike Kelly of the California Bureau of Narcotics Enforcement. But at least the big-time meth manufacturers have been pushed out of town. A sign that makers are under stress here comes from DEA street samples. Four years ago they typically tested 95 to 97 percent pure. Kelly says today the purity's down to 15-25 percent. The price has gone up too, from $4500 a 500-gram bag (about one pound) to $7000.

But Kelly doesn't believe all SANDAG's conclusions are reliable. Kelly also disagrees "100 percent" with SANDAG's suggestion that violence and meth use may not be linked.

"In my 31 years of working narcotic enforcement," he says. "I've arrested heroin addicts, marijuana users, cocaine users, and meth users. And the meth users are always more violent. You get a guy who's on a three- or four-day run, and you've got to arrest him; it's not fun. I don't have the statistical information SANDAG does. I've just had a few bloody noses."