Strategists assumed the Panama Canal would be Japan’s primary target 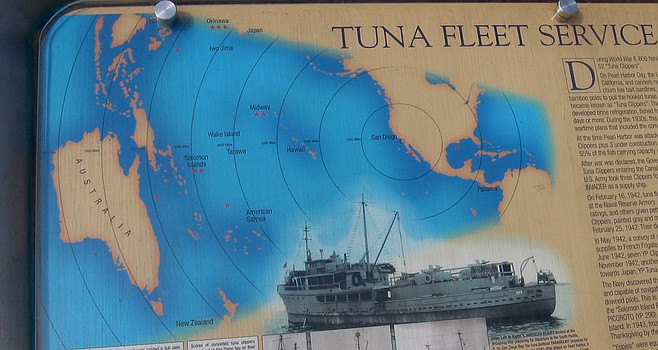 In the early 1930s, the Navy studied the possibility of a “two-ocean war,” to use historian Samuel Elliot Morrison’s phrase. The military didn’t have enough ships for war in the Atlantic and the Pacific, so the Navy considered converting the 11th Naval District’s tuna fleets for war-related activities.

Most strategists assumed the Panama Canal would be Japan’s primary target. In the 1930s, fleets of Japanese boats fished in the area. W. Baggaley, Commandant of the 15th Naval District, stated, “...even in their normal fishing operations around the Cocos and Galapagos Islands in furnishing information of the presence of probable enemy, [the tuna boats] would be of inestimable assistance.”

Passed in 1936, the Maritime Commission Act cut through the legalities of using civilian personnel in wartime. It also condoned seizure of ships in a “national emergency.” Around this time, the potential duties for tuna boats expanded: the large stowage space was ideal for transportation. The Navy designated 27 ships from San Diego — 110 or more feet in length — for seizure during a war.

“Two weeks into World War II, the United States Navy activated its war plan for conversion of San Diego’s tuna fleet of 45 clippers. In a few cases, the Navy had already commissioned tuna boats to patrol the harbor.” These “yard patrol” boats—or YPs—became known as the “Yippies,” On February 16,1942, San Diego port director Commander W.J. Morcott, U.S.N., addressed the American Fishermen’s Tunaboat Association. “The Navy needs the service of your tuna clippers. The government will either buy or lease your ships for the duration.... The Navy needs men to man the ships.... Needless to say, duty in the war zones will be hazardous. Who will volunteer?”

Three hundred men raised their hands. “The majority came from the Portuguese community along with members of San Diego’s Italian fishing community.”

Madruga joined up. “It looked like good duty, you know — we were experienced.” He became a Second Class Petty Officer and earned $80 a month during the war.

Skipper Vincent Battaglia: “They couldn’t teach us anything about seamanship—there wasn’t any military training they were going to give us. They knew we could handle the boats, so they didn’t fool with us.”

Madruga agrees: “Most of these guys just volunteered.. .that was kind of a nice thing to happen. The urgency to have these ships in action forced the Navy to skip basic training for the Yippie crews.”

The Navy feared Japanese submarines would destroy the Panama Canal, so the first group of Yippies headed south, on February 25,1942, to act as lookouts. Their departure “brought the $14,000,000-a-year tuna industry to a near standstill.”

Soon the clippers became transporters and suppliers for the entire Pacific Theater. In peacetime, each boat could hold 280 tons of fish in its 14 ammonia-refrigerated vaults. These became ideal for hauling “foods, meats, anything that had to be frozen,” plus high-test gas for aircraft, engine parts, clothing, even the sick and wounded (30 or 40 at a time). Ed Madruga: deliveries consisted of “beans, bacon, and mail to tiny rocks.”

The clippers carried two 50-caliber machine guns (“of World War I vintage"), Hash-can depth charges, and a 20-millimeter canon. Clarence Gonzalvez, captain of the Victoria: “We were so slow that almost anything could have sunk us from long range. Our 50-caliber machine guns would have been pea shooters in a fight.” And the ammonia in the refrigerators, if struck by a five-inch enemy shell, would suffocate the crew.

“With a top speed of 10 knots, the clippers traveled in convoys to avoid attacks. Occasionally, however, they traveled alone to avoid Japanese submarines.”

The press called them “the Errand Boys of the Pacific,” a label Yippies loathed. They preferred two others. One, Clarence Gonzalvez says with pride, was the “Pork Chop Express”: “We carried meat and vegetables from Pearl Harbor all over the central Pacific. We ran to Midway, French Frigate Shoals, and to Johnston, Fanning, Christmas, Palmyra, and Canton Island, just like an express. Sometimes we’d come back from an 1800-mile jaunt, load up with ‘pork chops,’ and go right out again.” The most popular nickname came from the crews. They didn’t know how to wear their uniforms, “didn’t know how to salute.. .didn’t know how to do anything.” They’d sail into port grime-caked creatures with only vague memories of a shave or a shower. Vincent Battaglia: “Nine months without any mail, seven months without any pay, no clothes, we looked like hooligans.” They became “the Hooligan Navy.”

The “hooligans” hauled cargo throughout the war. “After four years at sea, 50 clippers saw action, and 19 were lost.”