“Number one is the length of Shelter Island.Ballast Point would be number two." 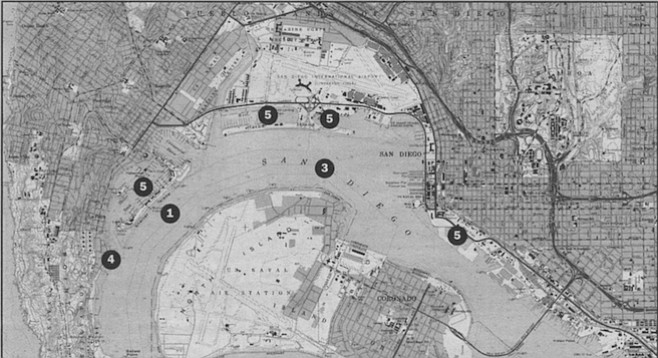 Barry Brightenburg's fishing boat is out of commission, so I meet him at Seaforth Boat Rentals at Gate 1 of the Marriott Marina, 9:30 a.m. Seaforth outfits us with a 20-foot, center-console fishing boat. “I do bay-fishing seminars for them,” says 35-year-old Brightenburg, “so they’re letting me use this boat today.” 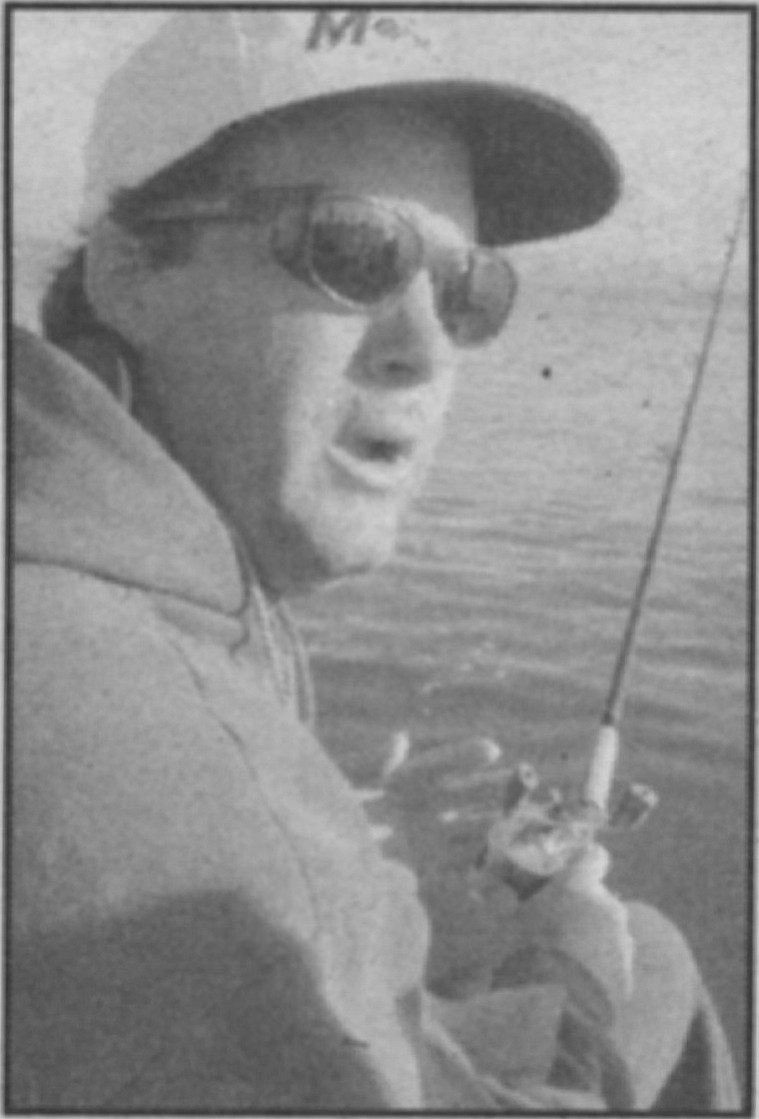 When I called around to area bait and tackle shops, Barry Brightenburg's name kept coming up as someone who could teach me how to fish San Diego Bay. He’s been fishing the bay since 1972, and he owns a company, Fish Trap Lures, that manufactures artificial bait designed with the bay in mind. “San Diego Bay is a great, all-around fishery,” he tells me as he steers the boat around Embarcadero Park. “It’s a very basic fishery. It’s great for beginners, kids, wives, girlfriends, and tourists because there are plenty of fish to be caught, and you can catch them with basic equipment and tactics.”

As we speed toward the mouth of the bay, Brightenburg explains his tactics to me. “First of all, you need some moving water. If you have a chance to go fishing and there’s no current, you can go back into the back basins — Harbor Island, Shelter Island, the Marriott — and fish with ultralight gear and make a day out of it. But assuming you want to fish the main bay, you need four feet of water or more in an incoming or outflowing tide flow. That’s the main thing, having some current.”

Brightenburg, dark-haired, full-faced, about six feet tall, kills the motor and we drift with the current. Next, he ties lures to the three rods he’s brought with him. The lures consist of a lead fish head at the eye end of a hook and a colored plastic fish body that slips over the hook. An angler can switch the plastic part without having to untie the head. He casts one lure out into the current and hands the rod to me. “Let that take out line until about half of the reel is out,” he tells me. “You want to let out a lot of line so the lure stays close to the bottom. That way, you’re always within that strike zone, which is a couple of feet off the bottom. That’s where the bay fish swim most of the time.”

He casts two more lures out, one of which he works, the other he puts in a holder at the stern of the boat. The lures trail behind the boat, which drifts with the current. This is the second part of Brightenburg's method. The fish swim into the current and the lures travel with the current. As the lures go by, the fish turn and bite them.

Glancing over at my reel, he says, “Okay, start reeling it in.”

I do and after about ten turns I feel a sudden heaviness in the line as if someone hung a 50-pound weight on the end. My winding grinds to a halt. But just as suddenly as it came, the heaviness goes. “That was a bite,” Brightenburg chuckles. “Next time that happens, reel in line as fast as you can. A lot of people, especially guys who have fished for trout or bass in the lakes, they get the urge to pull up on the rod when they feel that tug. But because you have so much line in the water with this kind of fishing, it doesn’t really do anything.”

I finish reeling in my lure and Brightenburg takes a break from reeling in his line to recast mine. I offer to do my own casting, if he could teach me, but he smiles and says, “Well, you’d probably backlash it. It takes a lot of practice to learn how to cast with these reels.”

As Brightenburg casts my lure, his own pole starts to bend and jerk. He grabs it and winds the reel at high speed. In a few minutes, a tan fish with vertical gray bands surfaces, fighting, flipping, and rolling all the way up. “It’s a sand bass,” he says, holding up the 18-inch fish. Gripping its lower lip between his right thumb and forefinger, he reaches into its mouth with the left hand and works the hook free. Then he sets the bass in the water next to the boat. The fish pauses; when the “I’m free” impulse finally makes its way from tiny fish brain to tail fin, it swims out of sight.

What other fish can be caught in the bay?

“You can catch barracuda and bonito in the summertime. The bass and halibut are year round. You’ll also catch the occasional bonefish, and that’s pretty much it. There are a lot of bait fish in the bay too: smelt, anchovies, mackerel, and sardines. You can catch smelt and use them for bait. They’re really good bait for halibut.”

Brightenburg fires up the motor and we head for the central channel of the bay. But before we can cast any lines, we have to make way for the USNS Kiska, which is coming into port preceded by an inflatable boat full of SEALS and followed by a big orange tugboat. I’m amazed at the ease with which the massive ammunition ship slips silently through the water, raising almost no wake. The tug, however, raises a huge wake, bobbing us up and down like a cork. After the convoy passes we try a few casts in the central channel but with no luck. Brightenburg moves the boat to a spot about 150 yards off the end of the fishing pier on Shelter Island. “There’s a big bed of clams all along Shelter Island here,” he explains. “And the sand bass love to feed on them.”

He casts out a lure and hands me the rod. As the boat drifts westward, the lure dragging behind pulls out line and I watch Navy helicopters and jets flying overhead. Pretty soon a jerk on the pole alerts me that I’ve let all the line out. I start reeling in and after 15 or so seconds, I feel a heavy tug on the line. “Wind, wind, wind,” Brightenburg yells. I wind, but not easily. Because I’d let out so much line, and because I’m not very coordinated, it takes me about five minutes to reel the fish up close to the boat. As it thrashes, little tan chunks come flying out of his mouth. “Those are pieces of clam,” Brightenburg tells me.

Finally, I get the sand bass out of the water and I reach for it with my left hand, only to be greeted by the sharp spines that run the length of its back. “Time for you to feel the pain all fishermen feel,” Brightenburg says. “Hook your thumb in his mouth.” 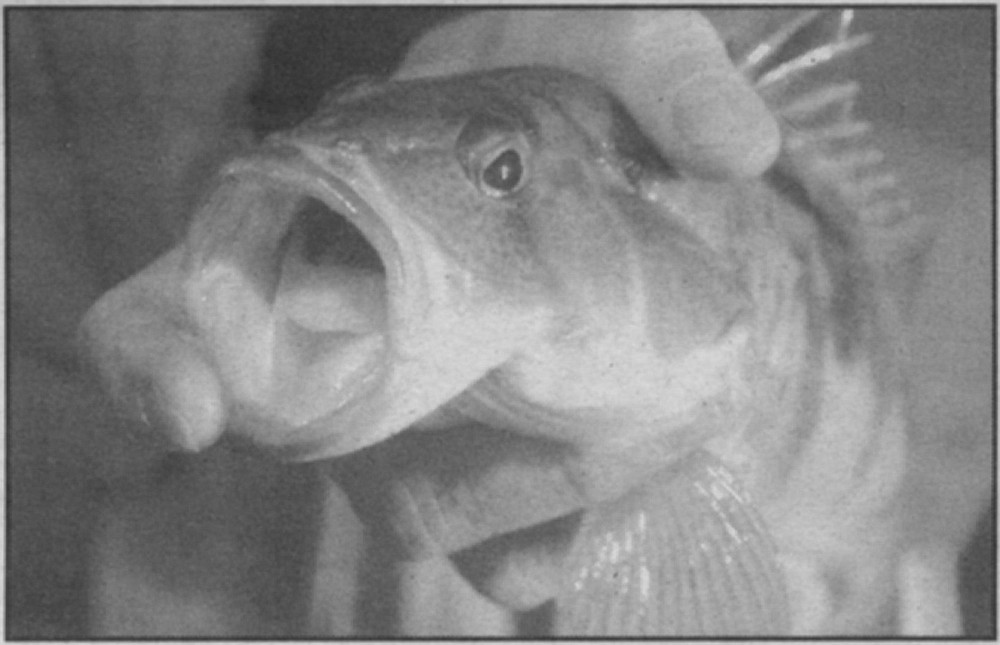 I do and feel sharp little teeth digging into my skin as the two-pound bass wiggles and fights. “Now reach into his mouth with your other hand and pull out the hook.”

I obey, but I can’t seem to free the hook, which has gone through the roof of the mouth and come out by the fish’s left eye. “Push down on the lead head, then pull it out,” Brightenburg instructs. I try hut to no avail. After a couple of minutes, he takes over in time to save the fish’s life. He sets the sand bass in the water, and it swims back down to resume its clam breakfast.

While we drift the length of Shelter Island for the next half hour, I catch another sand bass and Brightenburg catches three. But as we reach the end of the island, a wind out of the west starts to pick up. Wind, when blowing the opposite direction the tide is flowing, is a problem for this type of fishing; it prevents the boat from drifting with the tide. I can tell we’re not drifting because my lure isn’t pulling any line off the reel. Without the drift, the lures don’t move properly in the water and the fish stop biting.

“We’ll see if we can find a spot that’s sheltered from the wind,” Brightenburg says as he starts up the boat. While we speed toward the mouth of the bay, he gives me his top five fishing spots. “Number one is the length of Shelter Island where we just were. Ballast Point, where we are going now, would be number two. Number three would bf the middle of the channel, the whole length of the bay. Number four would be around the bait receivers, and five would be all the back basins where they keep the sailboats, fishing with ultralight gear.” The bait receivers are a couple of floating docks between Point Loma and North Island where anglers can buy live bait. “Last January,” Brightenburg laughs, “two guys in a canoe won the San Diego Anglers Bay Bass Tournament while tied up to the bait receivers. Usually, you have to move around to find where the fish are biting. But these guys found a spot of big fish that wanted to bite, and they stayed there.”

Nothing is biting at Ballast Point or the bait receivers, so we return to Shelter Island. Brightenburg gets the boat closer to the shore this time, in hopes of finding a little shelter from the wind. It works for a while, and we both catch another sand bass. By now it’s 11:30. The wind is getting stronger while the tide flow is slacking, the combination making drift fishing impossible. Brightenburg decides to pack it in, and we speed back to the Marriott. On the way, he offers a final tip. “Winter,” he says, “is the best time to fish San Diego Bay. The fish come in to feed on the clams and, I think, because of the stable water temperature. It doesn’t fluctuate as much as it does offshore. The sand bass tend to move offshore and spawn in June and July, so the fishing is not as good in summer. It still can be decent, but it’s not usually as good as it is in the wintertime. But still, you’re out on the water, enjoying the day, and maybe catching some fish. It’s very relaxing to fish the bay.”