When late-autumn Santa Ana winds blow across San Diego County bringing 80- to 90-degree temperatures to the coast, people visiting the 5000- to 6000-foot elevations of the Laguna Mountains are surprised to find the temperatures there rather chilly. During a full-blown Santa Ana, air temperatures rise more than 5°F for every thousand feet of falling elevation, which means it may be 30 degrees colder in the Lagunas than on the beach. On the bright side, Santa Anas nearly always scrub the atmosphere clean of all traces of pollution and moisture -- and that gives rise to mountaintop vistas stretching a hundred miles or more.

Kwaaymii Point, high in the Laguna Mountains, is a good spot for views and also as a starting point for viewful hikes along our county's share of the Pacific Crest Trail (PCT). On its 2600-mile course from the Mexican border to the Canadian border, the PCT was planned intentionally to touch or approach the highest points and passes of the major mountain ranges of California, Oregon, and Washington. The PCT's route through the Lagunas approaches this ideal within our county. 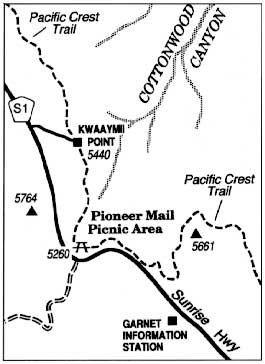 To get to Kwaaymii Point, drive up Sunrise Highway from either Interstate 8 near Pine Valley or from Julian via Highway 79, and find the marked turnoff (mile 30.3, according to the mile markers placed on Sunrise Highway at half-mile increments). The access road to the point is actually a pre-1975 version of Sunrise Highway, bypassed by the current wider and safer stretch of road to the west.

From Kwaaymii Point, pavement on the old road ends abruptly as you head on foot south past a vehicle barrier on the wide roadbed now designated the PCT. In a kind of reverse engineering, the roadbed itself has been transformed into a trail. For half a mile it chisels across a sheer slope and skirts the lip of Cottonwood Canyon, a forbidding-looking abyss with just a hint of lushness in its deepest creases. The outer retaining walls of the old roadbed are holding firm, but tons of friable metamorphic rock have fallen from road cuts above the grade of the road.

Starting from Kwaaymii Point, you can also walk a half mile or so along a narrower segment of PCT rising to the north, reaching a spot where the views of Cottonwood Canyon and the desert floor are even more panoramic.