Loneliest in the U.S. 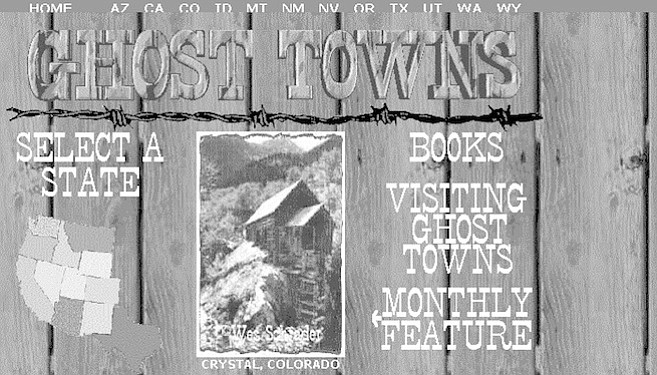 "Whiskeytown came by its name from the number of kegs of whiskey that were lost when mules lost their footing on the narrow trail and plunged into the ravine, emptying their precious cargo into the stream below. The stream became known as Whiskey Creek and the camp as Whiskeytown. Records show that S25 million was recovered from the streams and gulches of Whiskeytown. If the town were alive today, it could be seen east of Weaverville and west of Redding on Highway 299. But that is not possible, for it lies under 200 feet of icy cold water at the bottom of Whiskeytown Lake.”

Such tragic histories are the norm at Ghost Towns (www.ghosttowns.com), a Web site dedicated to ghost towning. The ambition of this site is to catalog the structures, objects, and histories of the nation’s ghost towns, and then to contextualize these places within the larger story of mining in the United States. “Just what is a ghost town?” the site asks. It’s a “town that is a shadow of its past glory. This includes everything from absolutely remote locations with very little remaining (sometimes called the ‘True Ghost’), to flourishing tourist towns such as Jerome, Arizona, or even Calico, California.” As with so many Web sites dedicated to uncommon pastimes, the pleasures of Ghost Towns lie in learning about its subject — sad, abandoned communities that carry only a trace of their rich histories — and in discovering the peculiar argot and networks of an obsession you never imagined existed.

The descriptions and photographs of the ghost towns at this site are submitted by a small group of tourist-scholars, many of whom use a specialized vocabulary. Besides the wonderful names of many ghost towns — in California, for instance, are Agua Fria, Reward, Rough and Ready, and Stovepipe — the words collected in the site’s glossary ring with a certain mystery and old-timeyness, though they also capture the rugged, mundane existence of the mining life. Words and expressions like “adit” (a horizontal entrance to a mine, otherwise known as a tunnel); “arrastra” (a Spanish word for a circular rock-crushing device powered by a mule); “mother lode” (we all know what that is); “nugget” (a lump of...see “mother lode”); “sluice” (an inclined trough); and “winzer” (a shaft sunk from an adit) speak to mining’s place within both the science and magic of invention. And the photographs here of rusty mine lanterns, 5-stamped gravity-powered ore mills, and Purex bleach bottles suggest the same tension. Mining, as we see it at ghost towns, becomes a mixture of practical, physical exertion and the trial-and-error guesswork of alchemy.

The writing, as well as the vocabulary, of those who submit to the site has a certain glow, they describe places with a rhetoric of matter-of-fact inevitability. To accomplished ghost towners, decline and ruin are common occurrences treated with a Darwinian detachment and just enough drama to keep you intrigued. One author, for instance, describes Kenworthy, a ghost town in Riverside County, as follows: “(The) site of the only real gold mining in the San Jacinto Mountains, Kenworthy was named for a wealthy Englishman who financed the town. Kenworthy began in the early 1890s with a salted mine and died only a few short years later. The town’s namesake was conned into financing a salted mine and lost his fortune because of it. The only gold mined was from the pockets of Mr. Kenworthy.”

One ghost towner, Henry Chenowith, with several submissions to the site, including the description of Whiskeytown, is especially observant of a given town’s particular marks of decline. Of a ghost town in Imperial County, California, he writes: “Twenty-five miles from Yuma, Arizona, north of Highway 80, is the ghost town of Tumco, California. A track walker whose last name was Hedges made a find in the early 1880s that created some excitement (and) that eventually lured as many as 3000 persons to the site. The town was named Hedges.... Water was piped in from the Colorado River. Hedges had all the makings of a boom-town except a hotel. Everyone lived in cabins of wood or stone. When Hedges felt he had made enough money, he sold his holdings to Borden, the condensed-milk baron. The new owner operated under the name of the United Mining Company. He renamed the town, taking the initials of the company...TUMCO. Borden ceased operations in 1909, thus creating a true ghost town. The most sorrowful scene is that of the cemetery. Overpopulated for a small town, each grave is unmarked, which adds to the feeling of complete desolation.”

So, that’s a True Ghost. A town that once had a condensed-milk baron but whose only remaining tailings are brick rubble and unmarked graves. You may visit Ghost Towns from the comfort of home, but that’s a small consolation