Why there are no stars in moon landing photos 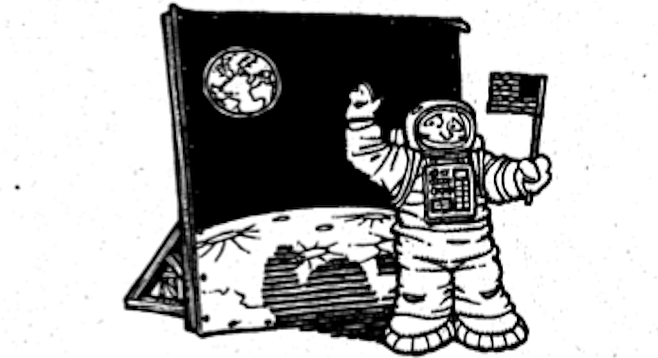 Dear Matthew: ln July 1969, some dudes walked on the moon. My mom told me that there were indeed stars in 1969. But in each of the pictures that I've seen of the moon landing, time are no stars. Did they just forget to paint the stars onto the backdrop of the sound stage? — Johnny Webb, Encinitas

Yeah, that’s it. Just slipped their little minds, Johnny. Guess they were too busy trying to get the PVC pipe.and tinfoil just right on the lunar (yeah, sure) lander. But the moon walk wasn’t the first big TV hoax. Didja know that Liberace was made entirely of Disney Animatronics parts and old Christmas tree ornaments? And the last 20 Super Bowls have been acted out on a pool table with tiny rubber figurines. Straight up, man. No lie.

Mom’s right. We had stars in 1969. (The Department of Defense invented them in the 1940s.) And just suppose for a minute that the moon landing really did happen. Well, actually, we’re gonna have to if we expect an answer out of Dennis Mammana, chief astronomer at the Reuben H. Fleet Science Center. He says it happened, and that’s that. Sez Dennis, if you want a clear picture of a large, bright foreground surface such as the moon or a planet, your camera has to be set for a very short exposure time. As a result, dimmer objects in the distance don’t have time to register on the film. Stars would be visible in the lunar sky even on its lighted side because the moon has no atmosphere. But much like the camera lens, the astronaut dudes couldn’t see them while their eyes were adapted to the bright lunar surface.