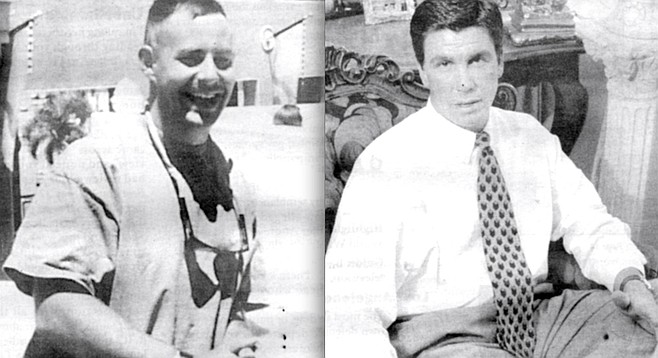 The metal gate creaks in the twilight. Dogs behind a second gate hear the squeak and set up a barrage of barking. This is protection. I knock at the black metal screen door. No reply. No lights inside. It's not until a couple of minutes later that Michael Williams and his partner pull up outside in their white bmw. He is somewhat wary. But you can understand that. He's the only person in the entire gay community I can find to speak out publicly about Andrew Cunanan.

By now everyone's heard of Andrew Cunanan, the Hillcrest man who targeted older, gay, wealthy men as companions to finance his life and then in a three-week-long killing spree allegedly murdered two gay friends in Minneapolis, tortured and killed a wealthy developer in Chicago, shot a cemetery keeper in southern New Jersey for his pickup, and then disappeared.

Cunanan's alleged bludgeoning of Jeffrey Trail, 28, in Minneapolis on April 27, his shooting of ex-lover David Madson three or four days later, his torture of Lee Miglin, 72, in Chicago, and his shooting of William Reese produced a new phrase in the popular lexicon, "spree murderer."

The murders have also sent many gay people in San Diego into a panic. From the Chee-Chee Club downtown to the International Male fashion store in Hillcrest, people either said they "knew nothing" about Cunanan or were unwilling to talk.

We sit down amid art deco pieces and chandeliers, not far from a table filled with framed pictures of a smiling young man Williams says is Jeff Trail. Williams shows me a program for a memorial service he organized here last week. It includes songs such as "My Way," sung by Frank Sinatra; "Wind Beneath My Wings," sung by Bette Midler; and the Mormon Tabernacle Choir singing "Amazing Grace."

The floor is varnished planking. The entrance has been laid with marble. Williams and his partner of six years, Mark, are restoring this house. Jeff Trail, it turns out, used to live here with Williams - a friend, not a lover - after he left the Navy and before he got a job in Minneapolis.

"I've known Jeff two years. He was almost like a brother to me," says Williams, a restaurateur who owns and runs the Grill 2201 on Adams Avenue with Mark. "Jeff had it together. He had a good background, he had good standing in the navy. When we first met, he was a lieutenant stationed at the Naval Amphibious Base in Coronado." He had courage too, Williams says. "Jeff did an interview with ABC's 20/20 on gays in the military. He was under disguise. He had to be. He loved the Navy. He didn't want to ruin his career. He also did a lot of work for the gay community here, like Project Lifeguard, which has to do with safe-sex programs. He had a lot to look forward to." By contrast, says Williams, Cunanan was a user, a leech on the prosperous members of gay San Diego. Yet Cunanan's charisma still leaves most of the community in his thrall. Williams found that out when news of the murders first emerged, and he started calling around, asking for pictures of Cunanan to distribute to the police and the press to help in his arrest.

"I couldn't get one person in this community to give me a picture. They thought of [Cunanan] as this rich guy who gave away thousand-dollar coats and gave away shoes and gave away money and paid for dinners and tipped well and should be considered innocent until proven guilty. Some said they'd actually take him in right now if he needed shelter. I became extremely irate. I said, 'You know, first of all, Andrew never gave you a thing. He swindled and lied and stole from wealthy older men. He never worked for this stuff. This is other people's money that he was giving you, other people's money that he was spending. He didn't give a shit. That's not right, first of all. Second of all, get on the phone with [Jeff's father] Stanley Trail and understand the pain that he's going through, and tell me you're not willing to help find this person." Williams says he should have listened harder to Trail as they talked on the phone in the days leading up to Trail's murder. Cunanan had become a constant companion of Trail's after being dropped by Norman Blachford, the wealthy La Jolla arts patron and businessman Cunanan had been accompanying and living off.

Williams says Trail lent Cunanan money and took him out for meals. "He was extremely loud. His laugh! It was just very, very loud. He didn't care what people around him thought."

But Jeff Trail had become increasingly disturbed by Cunanan's ways. "I asked Jeff how Andrew was making ends meet after being frozen out by Blachford," says Williams. "Jeff said, 'You know, I think Norman was giving him an allowance for a while, but I know that he's back to his old profession.' And I said, 'Profession? Why? What was his old profession?' And Jeff said, 'Oh, well, he sold drugs.' Cocaine. Crystal meth, ecstasy. And I think that that affected Jeff a lot. I think that if Jeff suspected that, he didn't want anything to do with it. And there became a huge distance between the two at that point, the end of last year."

Which is why Williams says he was surprised when he ran into Cunanan by chance this April; Cunanan announced he was flying to Minneapolis to meet Trail. "I was at the Taste of Italy on University, waiting for a pizza. Andrew was standing in the doorway of Flicks [a nightclub next door]. He came out and sat down next to me, and I asked him, 'Have you talked to Jeff?' And he goes, 'No, but I've got to get [to Minneapolis] to see him. I haven't talked to him in a while.' "

Williams was aware that David Madson, 33, an architect who Williams says may have had a relationship with Cunanan, was also in Minneapolis. Yet Cunanan's sudden interest in traveling to "see Jeff" seemed innocent.

"I never trusted or believed him," says Williams, "and I certainly didn't like hanging around with him. But I didn't think he acted any stranger or any different that night." Cunanan allegedly bought a one-way ticket to Minneapolis and flew out on Friday, April 25.

This is where Williams wishes he'd been smarter. He called Trail. "I asked Jeff if he'd talked to Andrew. He told me that Andrew and he had had a huge falling out and that he would never speak to him again. When I asked why, he said he was just sick of the lies and the bullshit and all the stories."

And then Trail said something strange. "He told me, 'You know, I've got to get out of here. They're going to kill me.' "

" 'They?' You know what? I never even questioned him on that. I just took it as a figure of speech. Like Minneapolis - 'They're killing me.' The Minnesota weather. The people. The hours. The job. The night that I called him they had floods going. But he was really depressed. He says, 'You know, Mikie, I've got to go.' He asked me about coming back here. I told him he should, that I'd give him a job. I said, 'You can stay here as long as you want.'"

That Sunday night, April 27, at 9:55 p.m., according to Minneapolis police, Jeffrey Trail's watch stopped. A bloody claw hammer was found near his body.

Michael Williams gets up and walks over to the collection of pictures on the table. He tells me he's struggling with what he could have done, with why Cunanan would target his gentle friend, with the possibility that "they" referred to Cunanan and Madson. He wonders if Trail's murder is related to the murder of Lincoln Aston, a wealthy La Jollan who died from a similar bludgeoning in May 1995. (A drifter named Kevin Bond has admitted to the crime. San Diego police say they are satisfied with his confession.) "I do think it's a possibility. Aston was a friend of Andrew's and Jeff's. I think that Jeff must have known something in order for Andrew to [attack] him like that. I think it's very odd that the man was killed in that fashion, and Jeff was killed in that fashion. And Jeff told me Andrew told him he - Andrew - was the one who found [Aston's] body."

The last time Michael Williams saw Trail was in his car last fall, when Trail was about to drive across country to his new job in Minneapolis.

"He was parked right out front there. I hugged him. I told him I loved him, to be careful. He said, 'I've got my gun underneath the seat here...' " A gun Williams tells me Trail acquired while training for a position with the California Highway Patrol he later chose not to pursue. "He said, 'Everything will be fine.' And he left that day, and I know that's the gun that Andrew Cunanan has now."

Stanley Trail, father: "Jeff was the kind of guy who was always trying to help people out. He was kind, caring. He had very few bad habits."

Sister: "But Jeff wasn't killed because of high-risk behavior. He was not into drugs. Despite the sensationalism of the case, as a family we want to set the record straight. Jeff was special. He was a good guy. He was hard-working and family oriented. We all loved him."

Sister: "People would ask Jeff why he put up with Andrew. His friends told me Jeff would say, 'It's kind of like having a black sheep in your family. You just put up with him and you just love him.' "

"Since his first victim was also his best friend, (at least for the time I knew him), and such a polar opposite of Andrew; Jeffrey Trail, modest, kind, honest and proud Naval Officer, just the nicest guy you could ever meet, and was killed with such vicious intimate brutality - that first murder was such shock to me that as the other victims started surfacing it just seemed like a bad movie as it unfolded."

"I miss the hell out of Jeff, as does anyone else who knew him."