Will the attack on Jesús Blancornelas change Tijuana journalism?

Plates of lead, bullets of silver

When Miguel Cervantes was 14 years old, he told his mother he wanted to be a reporter. At that time in Tijuana, no college or university offered degrees or courses in journalism. 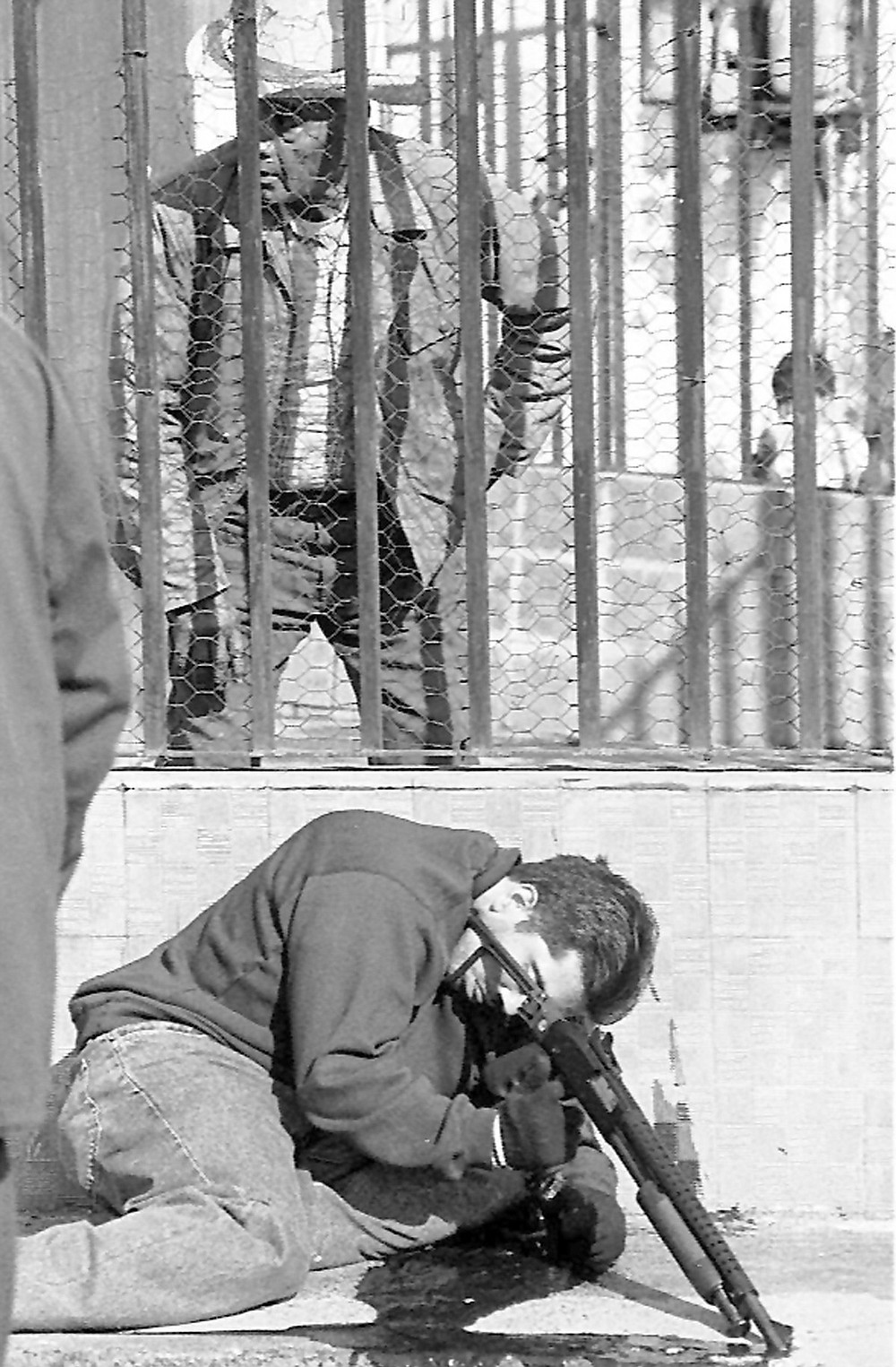 "I'll have to go to Guadalajara to study," he said.

"Mexico hasn't changed that much," he says. "My mother was right.

"It's probably difficult for Americans to understand, but Mexicans are raised with an awareness that journalism is a dangerous business. When I first told my mother that I wanted to become a reporter, she was very aware of what had happened in the late 1960s in Mexico City when the president forced the expulsion of the editorial board from the newspaper Excélsior. These people later founded the magazine Proceso. And in the early 1950s, a prominent journalist in Tijuana was killed for revealing the names of people involved in prostitution and contraband liquor. Something similar happened in the early 1970s too. It's a fact of life -- sometimes journalists are killed in Mexico. You learn that growing up.

"I learned more, much more about what it meant to be a journalist after I started working for Jesús Blancornelas in 1977. His paper was called ABC, back then. It wasn't yet Zeta. He taught us young reporters everything. In detail. He taught us things about the actual practice of journalism that you would never learn in journalism school. He lectured us about reporting on drug smugglers. You have to remember, Tijuana was much smaller back then. The drug traffickers were smaller too. Less powerful. But Blancornelas taught us that you can write about drug traffickers only when they're being arrested or on trial. They understand that. They understand that that kind of exposure is part of doing business. You cannot, however, write a story that leads to their arrest. If you write anything that implicates them, that threatens their business, they will deal with you in a very specific way. First, they will ask you politely, very politely, to please stop what you're doing. If you persist, they will try to bribe you. If you don't accept their bribe, then will come the threats. And if you still persist, they will ask you to make a decision. Either you accept money, or you accept lead.

"It was a very good, very specific lesson about the practice of journalism in Mexico."

And it was a lesson that came to mind two weeks ago on Thanksgiving Day when Cervantes was driving toward the border. He had his police scanner on as usual.

"I was on my way to San Ysidro to pick up a friend. I was driving along, turned on the scanner, and the first thing I hear is the dispatcher saying that there had been a 1051, which is the police code that means someone had fired a shotgun. That was unusual. You often hear 1050, which means someone fired a revolver. The other thing was that the shotgun had been fired in the Las Palmas neighborhood, which is upper middle-class. A 1051 in Las Palmas had to be something very big.

"The next thing the dispatcher says is that there were two dead at the scene. Then I heard a police officer say that two cars had been involved, and he put out an alerta -- what you call an APB -- for a white Sentra and a green Oldsmobile with a broken rear windshield. Immediately after that, there was this very high-pitched noise that came through the scanner. The dispatcher started telling all the police to be real careful -- someone was actually jamming the police radio frequencies. The Arellano family, the drug lords, were jamming the frequencies. I thought, 'This has to be something real big.'

"When I got to the scene, it was complete pandemonium. I didn't know at first what had happened. I saw Blancornelas's son wandering around in kind of a daze, and I figured he had gotten to the scene so fast because he lived real close by. And then I saw the bodyguard's wife, who was screaming and crying. And then I saw the assassin, sort of laying against a wall, bleeding, still holding his gun. And I thought, 'My God, what has happened here?'

"I walked over to Blancornelas's son and asked him what was going on. He said, 'My father's been hit, and they killed Valero, the bodyguard.' It took about 15 minutes before I began to realize the magnitude of what I had in front of me.

"It wasn't until much later on that it came to me that this attack was very different from all the others in the past. It wasn't like incidents when the government or the military tried to intimidate journalists. Or when powerful, corrupt families tried to intimidate journalists. Those incidents were always mysterious. There was never any direct proof of who was involved. I was at Zeta in March 1987 when someone fired at the office with a submachine gun. I was there in December 1987, when a Zeta correspondent in Sinaloa was murdered. And I was there in April 1988, when [Hector] Félix Miranda, the Zeta columnist, was assassinated. But we never had any tangible evidence of who was involved. But this time it was a complete, full-force violent attack against journalism, and the parties involved left a very real, three-dimensional piece of evidence -- an assassin, laying dead on the street, covered in blood, with his finger still on the trigger of his gun.

"I left Zeta two years ago on friendly terms. I had been a reporter. At the time I left I was photo editor. I was torn between two loves, writing and photography. I chose photography. I now run my own photo agency. I take photographs and sell them to newspapers all over Mexico. I'm not that close to Zeta anymore. I can only speculate as to why the attack happened. These are just my thoughts, my guesses about why Blancornelas broke his own rules for reporting on drug traffickers.

"Twice in the fall, in September and November, Blancornelas appeared publicly -- and was photographed appearing publicly -- with the federal district attorney. This was a very odd thing for Blancornelas to do. He may go to a national address given by the president of Mexico, but he almost never goes to press conferences or official events. And there he was in September at a military compound south of Tijuana, watching a whole bunch of marijuana and cocaine being burned. Standing there with the federal district attorney. And he was photographed again with him in November. It was Blancornelas's way of telling the drug lords that he was receiving very dangerous information from one of the top sources in the country. It was his way of saying he had very dangerous information and that he wasn't afraid to print it. To understand why, you have to understand the incredible level of corruption and violence that the drug lords have caused. They've touched every level of society, every level of the government and the military.

"I imagine an American journalist might wonder why a Mexican journalist would expose himself to these risks. But like I said, we grew up aware of these risks. Sometimes the risks are greater, sometimes less, but they're always there. I'm still conscious of them. I write occasional pieces for Siete Dias, the weekly newspaper in Mexicali. I'm on the editorial board there. And when I write, I'm aware of how my words might affect some reader, how I might end up in the crosshairs of some nut's rifle. I don't think the attack on Blancornelas has changed anything. Being a journalist in Mexico is still like being a policeman: you might get shot at, but what keeps you going is your love for your job.

"I say that things haven't changed, but I noticed something very odd [recently]. I was at this press conference about the raids on 50 homes of suspected drug traffickers involved in the attack on Blancornelas. The commander of the Federal Judicial Police was there, and he was giving the journalists a hard time. At one point he implied that we journalists were all involved with the drug traffickers. And when he said that, the journalists got angry. They really went after him. They started yelling. They started asking him really hard questions. I'd never seen anything like it before. And the amazing thing was that the commander backed down. He apologized. He said he was only joking."