The problem is not mouse but mice 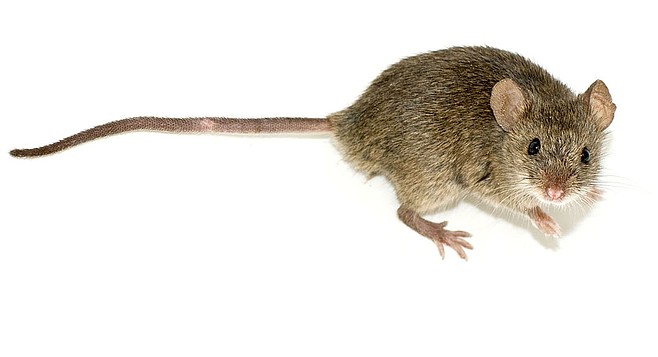 I am teaching at a private school. Like many such, it has taken over a large country estate — both grounds and house. Although there is a separate classroom building, dining room, and several dormitories, the main house towers over the campus, a vast, rambling, wood-shingled hulk, with plaster walls and ceilings, fireplaces everywhere, and elaborate wainscoting in every hall and stairway...in other words, mouse heaven.

Here, I have a small apartment cut out of two large bedrooms. One evening late, lying in bed reading, I hear a rustling noise and then a clink. I turn my head to see a mouse departing from my dog’s bowl of dry kibble, clutching a chunk of it the size of a hazelnut and heading for the large steam radiator, behind which, apparently, it has a hole.

The strange thing is that my dog — a large Siberian husky — is lying right beside the bowl. His eyes follow the mouse to its hole and then, a few seconds later, ponder its return, as it strolls right past his nose, climbs into the bowl, helps itself to another piece of kibble, and lugs that, too, back under the radiator. I don’t know why he allows this — sheer laziness, perhaps, or a feeling of good riddance regarding the kibble. This he eats as if it is barely worth the bother of mouthing down, flopped in front of the bowl (he stands up for scraps or canned dog food.

Perhaps it is something else. I’ve read of foxes living right outside wolf dens, eating scraps of the kill and being generally tolerated. Of course, although dogs kill cats out on the street, they often learn to share quarters amicably with them at home. I think about this the next day, as I get down on my knees and hunt under the radiator until I find the mousehole and set a mousetrap right in front of it.

It is an interesting fact that a mousetrap does not require bait. Set it alongside a wall and a mouse will eventually just stumble into it. Today, to convey this message, some mousetrap makers form the trip lever to look like a slice of Swiss. The notion that the dab of peanut butter, the sliver of cheese, is necessary is a sop to our conscience. It allows us to blame the mouse for its own death. It also transforms an ugly necessity into a little moral drama. In the mousetrap lie the origins of the tale.

I don’t think I’ve ever felt any fondness for house mice (field mice, with their light brown coats and soft white bellies, are a different matter, although I trap them, too). But I sometimes do feel neighborly toward them, a strange balance of irritation and acceptance, reflected, perhaps, in the fact that only a single letter separates pet from pest.

The problem, of course, is not mouse but mice. En masse, they are relentless, their habits disgusting, their nests, when uncovered, irredeemably verminous. The individual mouse, the mouse as metaphor, is another matter. Tiny, shabbily gray, unthreateningly timid, the quintessential homebody, the mouse gives legitimacy to our private space by transforming it into an entire universe. However humble our habitation, the presence of the mouse expands it into something dangerous, awe-inspiring, and huge — the castle where we play king.

The. poorer the house, the more appreciated the illusion. The ability of the mouse to feed on crumbs can make the crust seem like a feast. Consequently, it is over the imagination of the poor that the mouse has the strongest hold, at once threatening and enhancing the little that they have.

On the other hand, the mouse’s home, the place beyond the mousehole, is not just another living space, a separate apartment, but the house within the house, home squared. From this perspective, the mousehole is the doorway into a kingdom of intimate space, the place we also perceive through the window of a doll’s house. This is exactly how the illustrators of children’s books depict it, with the resident asleep in an easy chair pulled up to a tiny fire, comfortable, warm, safe, two realms away from the dark predators that stalk the night.

What this picture does not show is that, in its dreams, the mouse becomes a rat. The rat is the mouse blown up beyond cuteness. Although equally timid, its size makes its skulky nervousness seem psychotic, as it makes the long, pink, naked tail reptilian and repulsive.

Even after you have seen one, it is hard to admit how large rats are. Years later, a friend’s dog catches two late at night in the kitchen of my tiny Maine cottage, one after the other — each the size of a gray squirrel. I am angry at the dog; I don’t want to know that such things are in my house, slipping out of the walls at night to roam about at will.

What disturbs me most about the rat, however, is not its size but its ability to go almost anywhere a mouse can (its skull is jointed so that it can squeeze through the tiniest cracks). This reverses and unsettles the deep belief that I am somehow safest when buried deepest in my nest. It is not the burglar but the rat — king of misrule in the house as nightmare — who lurks beneath the bed. Before the presence of the rat, intimacy means not being able to escape.

Hence the cat, who is in every way the antithesis of rodent. Mysterious, but also meticulous, sleek, bold, and quick, it resolves the contradictions posed by the mouse or rat by killing it.

The cat represents the triumph of the forces of order over the forces of disorder, forces that in ourselves are in confused, perpetual battle. The cat is the avatar of that cool gnostic deity control: equal parts good and evil — a dangerous thing to worship, but a necessary household god.