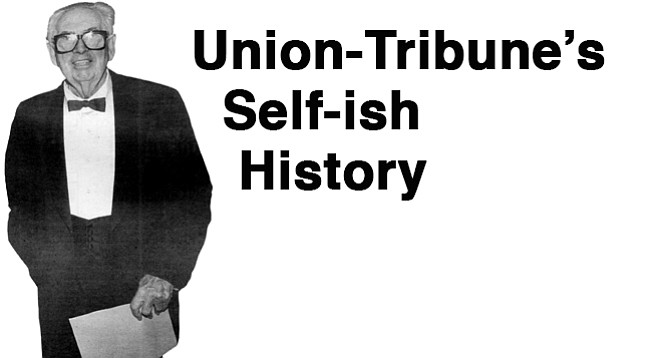 The San Diego Union-Tribune harbors “unprofessional, childlike, head-in-the-sand attitudes toward events and ideas." The paper has "bad journalistic habits, plus [a] tendency to sound the bugle call to action whenever it feels its ideological tenets threatened "What’s more, “political, social and business alliances…play a large role in preventing the Copley papers from acting like real metropolitan newspapers.”

So believed Edwin Self, editor and publisher of Sun Diego Magazine. By the time of his death last week at 75, his magazine had been sold to others and his crusading voice had long been stilled by Alzheimer’s disease. But in the wake of his passing, Self’s un-flattering history of the city’s biggest journalistic institution — told through a series of stories written over the 40-year history of his tenure at his pioneering city magazine — provides a unique tribute to his inside knowledge of the city’s soft political under-belly.

Self’s most famous attack on the Union-Tribune was an essay headlined “Union-Tribune, The Mute Town Crier (or He Who Gets Zapped),” published in June 1970. Self blamed the Copley “monopoly" for creating “dangerously uninformed — and mis-informed — public opinion in this town,” and for contributing “to the perpetuation of an unfortunate national image of San Diego as a city dominated by right-wing crackpots and the Navy."

Self traced the trail of deception to the 1960s presidential race, in which “the Union pulled out all the stops [for Nixon]: omissions, distortions, stacked-deck emphasis... It was an unbelievable editorial performance by a major U.S. daily, a classic piece of flagrant partisanship for one candidate and prejudice against the other.”

(Jim Copley’s letters to Nixon from the era, now in the National Archives, show that Self was more correct about Copley’s influence than even he might have guessed. “Dear Dick,” Copley wrote in a letter to the vice-president dated September 13, 1960, “As you know, I am doing everything possible through the Copley newspapers to assist you in your campaign. I feel so vehemently that we need you as the next President of the United States.”

(A month later, Copley again wrote Nixon. “I am delighted to know that you will be in San Diego to make a major speech. The San Diego Union and Evening Tribune will do everything they can to help get an excellent turnout for you.” Responded Nixon: “The all-out assistance you are giving us — ranging from the loan of [Union editor| Herb Klein and [reporter] Pete Kaye to the help on the San Diego programs — is most gratifying. I only wish we had more like you!”)

The U-T's involvement in Republican politics was a frequent target of Lionel Van Deerlin, a regular contributor to the magazine. Just after the 1960 presidential election, the future congressman wrote a column headlined, “Copley’s Campaign.”

“A sure sign of election season, around Union-Tribune offices, is when editors and special writers begin dropping away like autumn foliage,” Van Deerlin wrote, citing temporary departures by Union editor Herb Klein and Tribune political writer Art Ribbel to work in the political campaigns of Nixon and GOP gubernatorial candidate William Knowland. (Today, Klein, almost 80, remains editor in chief of the Copley Newspapers and, in addition to his editorial duties, is serving as a fundraiser for this year's Republican convention.)

“But the staff runs deeper than a Big Ten football squad in men who know their fundamentals,” Van Deerlin continued. “A Union campaign is, after all, not a seasonal thing. It continues ’round the calendar, attentive as Moscow to the party line.”

Van Deerlin also reprinted some of the U-T’s editorial rantings against John F. Kennedy in the days leading up to the election — “The Democratic presidential nominee seems willing to risk our national security for votes,” “Senator Kennedy seems to believe that if you tell a lie often enough it will come to be believed," "He has a consuming lust for power.”

Concluded Van Deerlin, “The Copley Press has never waged a more effective political campaign than the one it completed last month. In the California community hardest hit by unemployment, the newspapers ‘carried their precinct’ — helped keep San Diego the only U.S. city of a half-million or more in the Republican column. If Kennedy and Nixon had run close enough to make California's 32 electoral votes decisive, the better-than-40,000 majority in this county might well have tipped the race to the Republicans. In which case, owner James Copley would have richly earned the prize that staffers quietly anticipated for him in a Nixon administration: Secretary of the Navy.”

In later years. Self wrote, “old associations and loyalties were involved in the papers’ strangled performance” as two of the biggest local stories in years unfolded. “The really inexcusable failure of the Copley Press to report in adequate length, perspective or depth all the legitimate news surrounding the sensational charges of corruption in the San Diego Police Department, and the federal grand jury investigations leading up to the indictment for income-tax evasion of certain members of the prominent Alessio family, probably did more to damage the Union’s reputation for integrity than any single event in the company’s history.”

Self pointed out that in January 1970, Newsweek profiled the Union in “one of the harshest blasts against a U.S. daily newspaper in the magazine’s moderate history.” Noting that the U-T hadn’t mentioned the piece, he ran most of it, including claims that the paper “shuns" coverage of minorities, kept Robert Kennedy’s picture off its front page “until his death,” sent accounts of left-wing and radical meetings into a file maintained by a former FBI agent, and had won few journalistic prizes — “excepting Copley’s in-house ‘Ring of Truth’ awards.”

Later, Self published a lengthy response from U-T news director Milford Chipp in which he refuted most of Self’s contentions and called the Newsweek story “low quality.”

Self promptly shot back, reiterating his “central argument, that the Union-Tribune's horse-and-buggy, ultra-conservative political and moral ideologies far too often creep off the editorial page and into its news columns, distorting, suppressing, or altering the reporting of events and ideas it doesn’t like or doesn’t want people to know about.” Noting that reaction to his article had been overwhelmingly positive “on the order of approximately 30 to 1,” Self said “the U-T ought to pay attention to the nerve we struck in this city.... Judging from our response, I think it’s obvious there is a sizable groundswell of feeling, ranging from apoplexy to annoyance, with the U-T arrogance and with the range and breadth of its coverage...with the paper's tedious moralizing and self-appointed assumption of the role of the town’s moral arbiter, with its tiresomely predictable and unshakable William McKinley view and grasp of world reality in the midst of global revolution, and with its narrow-minded presentation and coverage of national and local opinions and ideas.”

It was Van Deerlin who initially questioned the U-T’s editorial integrity in a series of columns, many of them focusing on the Copley connection to the military. In a column about Copley receiving a special award from the Navy and in turn supporting unlimited Navy use of Miramar Naval Air Station on Kearny Mesa, Van Deerlin wrote,“It has been the strategy of the Navy, and of newspapers owned by the Navy’s recent medalist, Mr. Copley, to divert attention from facts to fancy.

“For example, it has been made to appear that a few hot-heads in San Diego’s civic center are, for whimsical or petty reasons, pushing plans that will hamstring the Navy’s varied and complex flying operations in this community. With the timing of the struck factory owner who threatens to move his plant to Mississippi, the Navy used its boldest Union-Tribune type to suggest that San Diego would lose the carrier fleet if the jet training center at Miramar were not permitted to keep Kearny Mesa all to itself.”

In a 1974 story on the Copley Press’ new Mission Valley headquarters, which had raised eyebrows for being built in the middle of a floodplain, Urban Affairs writer John Britton took a few swipes at the U-T’s editorial policy, noting, “The Union today has not yet made the switch from benighted mediocrity to light-shedding brightness that the Los Angeles Times achieved in the ’60s.”

And in 1977, investigative reporter Harold Keen wrote a massive exposé on what he called “The Great Triple Alliance” that he said was running San Diego: Pete Wilson, Richard Silberman, and Helen Copley. In his piece about Jim Copley’s newly empowered widow, Keen described Silberman, a wealthy Democrat who would later marry then-county supervisor Susan Golding and then be convicted of federal money-laundering charges, as a “successful businessman who has become a power broker to match the halcyon Smith-Alessio period.” Silberman’s “multi-faceted alliances become more remarkable with the most recent development — his friendship with Helen Copley, openly displayed in datings at public events.”

San Diego Magazine's questioning of the Copley Press continued well into the 1980s, with articles and columns by Michael Bowler and others that recounted past foibles and stirred up current controversies. When the Los Angeles Times launched its San Diego edition, San Diego Magazine gave the start-up a multi-page spread. When Mayor Roger Hedgecock claimed the U-T had hounded him from office, San Diego Magazine let him vent.

But in his later years Self relegated more and more control of the magazine’s editorial policy to his second wife, Gloria, who ex-staffers say was more concerned with Paris fashion shows and wine-tasting trips to the Soviet Republic of Georgia than bashing the competition. “When Ed drifted out of the picture, the magazine lost its teeth,” says one former writer. “And the only one left grinning was Helen [Copley].”