The top and bottom of eggs

Store them on the narrow end 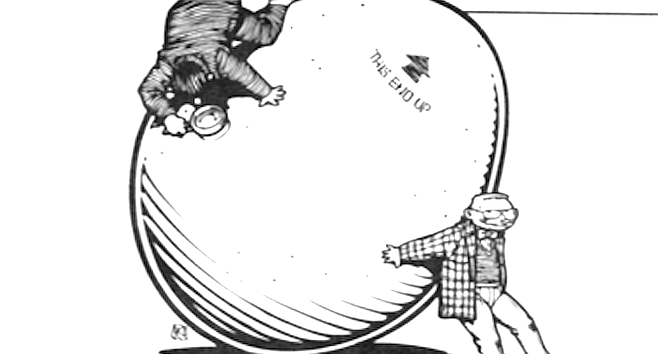 Dear Matthew Alice: My girlfriend and I got into an argument about eggs. I said that the narrow part of the egg is the bottom. She thinks that the fatter part of the egg is the bottom. Using common sense, I would think that the egg's bottom is the narrow part because of the way they’re packaged. Which one of us is correct? I tried to ask people around school to find the right answer and reasoning, but I knew the only one who could answer this question was the great Matthew Alice, who also has a cool name. — Matthew Martinez, La Mesa

Only a chicken could care about this one. Which, of course, means it’s perfect Matt material. Thanks for the chance to waste even more of our brief time here on earth. Assuming an egg is directional at all, except in the sunny-side up or over-easy sense, the investigative team from the Matthew Alice Farm Products and Laser Wrinkle-Removal Centre concludes that you are correct. The evidence is a stretch, but then so was the argument in the first place. The fat end of an egg is the site of a small air pocket between the membranes that line the shell. Storing an egg on its narrow end keeps the yolk centered and the air sac intact, perfect egg equilibrium, which helps it stay fresh. If the egg is destined to be a chick rather than an omelet, the bird’s head will develop at the fat end and its tail at the narrow end, another ridiculous point in your favor.