President Clinton says he reads about 250 books a year 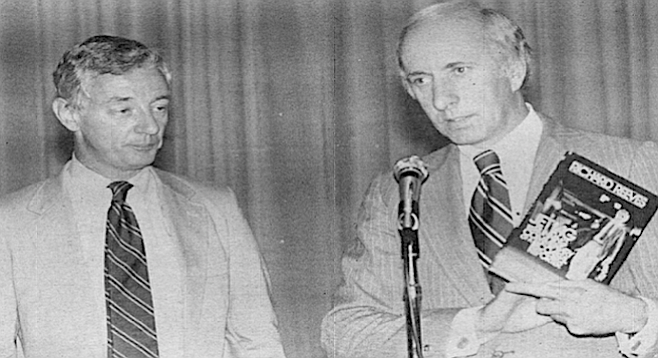 My library, which is more than a couple of thousand volumes, has been accumulated over a 35-year period.

It’s the most diverse personal library that I’ve ever seen, and that includes the libraries of friends of mine, some of whom are quite prominent.” By phone from his downtown office, George Mitrovich begins to describe his love of books, the subject of his pending talk at Bookstar. As president of the City Club of San Diego, a 20-year-old “nonpartisan public forum,” Mitrovich, 60, has hosted renowned speakers from varied realms of endeavor, most recently former Texas congressman Jim Wright.

In his library, he says, are “books on baseball, football, basketball; books on theology, on Christian apologetics, systematic theological works; books about politics, history, structures of government; hundreds of books of literary criticism, many of which I’ve read, which is somewhat ironic, given the fact that there are very few works of fiction in my library. I’m confident that that makes me less the person that I should be, because there’s a world of knowledge in works of fiction, but I’m just not drawn to fiction.

“People have asked, ‘Have you read all these books?’ The answer is no, because if all I did was to read books, I couldn’t have read all of these books. Take Winston Churchill’s biography of the duke of Marlborough, his ancestor: in the original edition, the book ran to six volumes. Because I didn’t know there had been six volumes, I read an abridged version, but the abridged version ran to 1200 pages. You know how long it takes to read 1200 pages? I mean, reading it over breakfast, or reading it an hour, an hour and a half at night before you go to sleep — it takes time to read books.

“I had a conversation recently with former senator Gary Hart, and I happened to mention to him that President Clinton says that he reads about 250 books a year, which seems an astonishing achievement, and Gary kind of dismissed it and said, ‘Well, I read that many. Don’t you?’ No, I don’t. But I believe Gary does. There’s a certain facility about reading books,

and some are more gifted at it. There have been books written on how to read a book.

“Former Senator Proxmire of Wisconsin was a perfectionist, and he took Evelyn Wood’s Reading Dynamics, and the joke was that after having completed the course, Proxmire could read Call of the Wild in three minutes, but the only thing he remembered was the title.

“Of course, the great question is: Will books survive? Will books endure? I would say there are an awful lot of cynics in the book-publishing profession who obviously don’t think they’re going to survive, because they’re no longer printing on acid-free paper, which means that most of these books within seven or eight years are going to be terribly discolored and eventually will just crumble.

“I have a set of Dr. Eliot’s famous five-foot shelf of knowledge, of the classics, that I think I paid $45 for. There are about 40 volumes in the set, and they were published in 1909, and they have the Harvard imprimatur on the cover. They’re on acid-free paper, and they look newer than books that I bought five years ago.

“Ben Bradlee, the former editor of the Washington Post — I had a discussion with him one day, and I said, ‘What are you doing?’ He said, ‘I’m trying to finish this book,’ which he has since published. And I asked him, ‘Did you work out a deal with your publisher to publish it on acid-free paper?’ He said no, he hadn’t. He didn’t even know what I was talking about. Well, I’ve never found an author who did know what I was talking about. I try to tell authors, make sure they publish it on acid-free; make sure you have some say in the design of the jacket and the quality of the book. But most writers aren’t interested.”

Would any books Mitrovich reads surprise his acquaintances?

“I suppose some friends think that serious individuals shouldn’t so trivialize their life as to be concerned about baseball. It always reminds me of Richard Reeves, who was then the chief political correspondent of the New York Times. Gloria Steinem and I were in New York City and we were going somewhere together in a taxicab, and Dick and I were talking about baseball. I said, ‘Can you name the 1950 Philadelphia Phillies’ starting lineup?’ That was the famous Whiz Kids; they won the pennant that year, although they got blown away by the Yankees in four straight games in the World Series. And I knew that starting lineup; I still do. Reeves said, ‘I don’t think you can do that.’ Well, I proceeded to name all of the position players and the three pitchers of note, which were Curt Simmons, Robin Roberts, and Jim Konstanty was the reliever. At the end of this, Steinem said” — Mitrovich cracks a laugh — “ ‘I think that is the most ridiculous, wasteful, nonsensical conversation I’ve ever been exposed to in my life.’ ”

In the early ’80s, Mitrovich was director of public affairs for J. David Dominelli, the local financier later imprisoned for fraud and tax evasion. Did Dominelli contribute money to the literary journal Paris Review?

Mitrovich reacts with a rippling chuckle, which he qualifies by saying, “I guess it’s ten years later, and I’ve never found anything about J. David funny, because it scarred my life, as it did everyone else’s who was there, so it’s still a very painful memory. But what happened was that Dominelli sent [Paris Review editor] George Plimpton a thousand-dollar check, and that made you a lifetime [Associate of] the Paris Review. So he listed J. David and Company on the back page, with some of the most distinguished names in America, for instance Brooke Astor, the great doyenne of New York society, who’s a great, great friend of Plimpton. So George — because that’s George Plimpton — he would often ask me, ‘How’s Dominelli doing?’ Then one day he said to me, ‘You know, some of my friends are asking me, “Who is this I. David fellow?” ’ I said, ‘Who’s asking?’ and he said, ‘Well, Mrs. Brooke Astor, for one.’ ” Mitrovich is breaking up with laughter. “And I don’t know, just the way he said it, I laughed so hard I was crying. So I said to George, ‘It’s probably okay if you take the name off,’ and he resisted that. I said, ‘Look, I think you can justify it on the basis that it may not have been Dominelli’s money.’

“I mean, if you know Plimpton, Plimpton’s one of the funniest human beings alive to begin with, and this was such a funny conversation. I think finally he did take it off.”