The scoring of American football explained

Go back to 1870s and British Rugby Union regulations 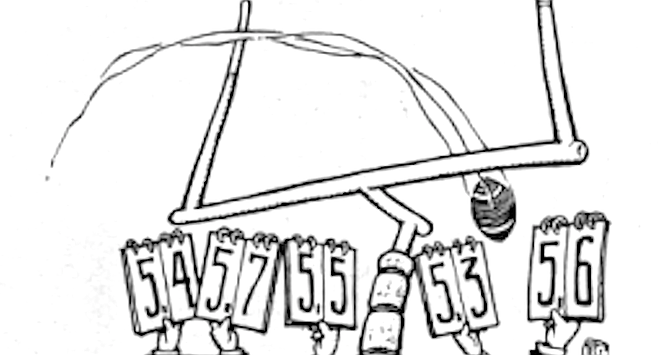 Matt: In all my years of watching football, I’ve never heard anyone explain why a touchdown is worth six points, a field goal three, a point-after one. Who came up with this screwy scoring method, anyway? What’s the difference if a TD is one point or six points? Did I miss the game the day they explained that — Bolt Backer, San Diego

Probably not, Bolt. Can’t figure Madman Madden ever tackled this one. Remember, American football comes from England, the chaps who gave us cricket. Only a few people truly understand cricket, and none of them star on the Fox network. I’ll try to keep it simple.

If we go back far enough, 900 years or so, futballe didn’t involve any points at all. Bunches of tough guys from two towns did whatever they had to to move a cow’s bladder from some point in the countryside into the other’s town square. No rules, no scoring, nothing sacred. After a 600-year ban on the game, mayhem with a cow bladder gave way to football (soccer). In 1823 a renegade soccer player at Rugby College picked up the ball and ran with it to the goal. He was snubbed at dinner as a poor sport, but that was the birth of rugby football.

When American colleges started playing rugby in the 1870s, they adapted British Rugby Union regulations. The union set the scoring rules according to a “degree-of-difficulty” principle, I guess you’d call it. They decided it was harder to kick a ball through the goal posts than to run with the ball for a touchdown, so they declared a field goal worth five points, a touchdown one point. Other scoring chances were set accordingly. (Early on in American play, the first three touchdowns didn’t give you any points at all. You had to score four in order for them to count. Each team could score three TDs, and the game would still end in a scoreless tie.)

For all its mugs-and-thugs reputation, American football graduated straight out of the Ivy Leagues. The rules committee, headed by Yalie Walter Camp, tweaked and poked the rugby rules, using the same “which is harder?” criteria, and set field goals at five points, touchdowns at two, points-after at four, and a safety at one. As Camp and the committee introduced new offensive and defensive rules to turn rugby football into the more tactical and strategic game of American football, the scoring changed accordingly. We’ve had our current system since 1912.

You didn’t ask, but I cleared up another football oddity — why the point-after touchdown is called a conversion. Rugby Union again. Score a TD, get four points. Make the kick after the TD, and the four points are “converted” into six, according to the rules. Okay, go towel off, Bolt.