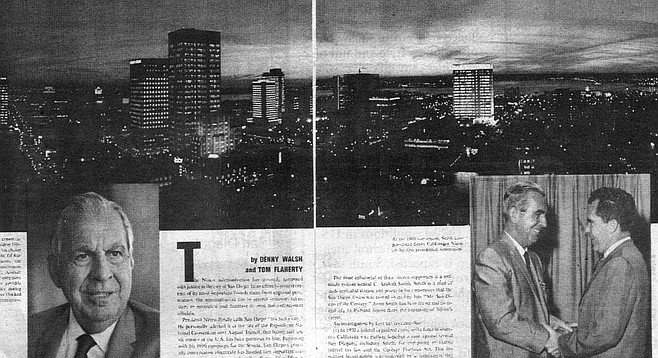 Denny Welsh is amused at the San Diego Union-Tribune's unabashed cheerleading about San Diego’s selection as host city to the 1996 Republican convention. The puff pieces, the editorials — he’s seen it all before, back in 1972, when he was a reporter for Life magazine. He’s also experienced, firsthand, the paper’s wrath at those who helped bring down the 1972 convention by uncovering shady doings by ITT. The telecommunications giant, which owned the Sheraton Hotels chain, had offered bankroll the San Diego convention to the tune $400,000, allegedly in hopes of influencing Nixon administration drop an antitrust suit was ultimately settled out court, in it’s favor. 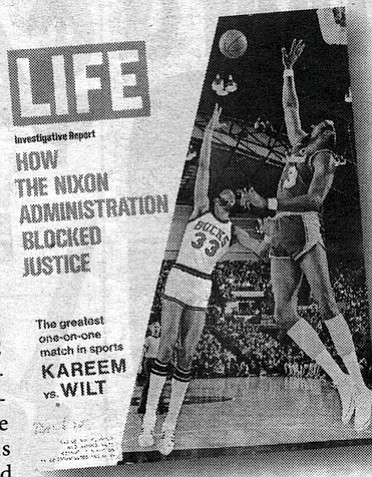 Welsh’s March 1972 cover article in Life, “Tampering with Justice in San Diego,” went beyond the ITT scandal to expose the cozy relationship prominent San Diego convention boosters like C. Arnholt Smith and John Alessio enjoyed with the Nixon administration, and how the White House “squelched” fundraising conspiracy and income tax evasion investigations against them “to keep San Diego’s law-abiding veneer from being washed away.”

The article led to intense congressional scrutiny of Richard Kleindienst, then-President Nixon’s nominee for attorney general. He was ultimately confirmed, but by then the Republicans were in full damage-control mode and had decided it was best to disassociate themselves entirely from San Diego and move the 1972 convention to Miami.

The San Diego Union smelled danger as soon as Welsh’s piece was published, the reporter recalls. “The Union jumped on the magazine and on me personally,” says Welsh, now 59 and a federal courts reporter for the Sacramento Bee. “They editorialized against the piece, against the magazine generally, and against me personally. They did everything they could to discredit my story, and I don’t recall ever even being called for comment. I remember one editorial they ran about the story, in which they called Life a ‘dying magazine’ trying to save itself with sensationalism. And I’ll never forget an editorial cartoon of two dead fish, one wrapped in a Life magazine and the other labeled ‘ITT Red Herring,’ and obviously a stench coming from them.”

The Union’s assault on Welsh’s investigative report began with a front-page story whose headline screamed, “Life's Story False, Attorney Here Says.” It quoted San Diego U.S. Attorney Harry Steward, whom Welsh had fingered as one of Nixon’s Justice Department shills, as denying the allegations in the article, without a single comeback from Welsh or Life's editors. On page two was a second article, headlined, “Agnew Shuns Comment on Life Charges,” in which the vice president, when asked about the accuracy of the allegations, would only say, “That's a damn stupid question.” The next day, the Union ran the editorial cartoon with the two dead fish, along with an editorial accusing Life of “showing a typical taste for sensationalism” by “rehashing old political gossip.”

“They tried to piss all over it,” Welsh recalls. “They took the side of the folks I had targeted. I had run through a whole litany of corruption and scandal in the community, and they said it was all overblown. I think they were defending San Diego as a marvelous and unsullied place, and they were certainly defending their brethren in the Republican ranks and, more precisely, the conservative ranks. You have to remember, San Diego in those years was practically run by C. Arnholt Smith and John Alessio and a group of very conservative businessmen. As I said in the story, Smith had been named ‘Mr. San Diego of the Century' by the Copley press, and so in a very real sense, to the paper, when I was attacking Smith, I was attacking the paper.”

Welsh isn't the only one who says the Union was biased toward the Republicans and extremely defensive about the ITT scandal and anything else that threatened to jeopardize San Diego’s chances of hosting the 1972 GOP convention. C. Logan McKechnie, a reporter who had just joined the San Diego Union from the Arizona Republic, says he knew about the scandal long before it broke in the national press, but his editors at the Union refused to run anything about it. “I came from a very aggressive newspaper where there were no sacred cows,” he recalls, “but I soon realized it was not that way at the Union. It was horrible. They said, ‘This is a lousy story, you can’t write, and we’re not going to run it.’ I later found this was just one of the ways they got rid of stories they didn’t like. They would sit on them, edit them, and when they got done, it wasn’t like anything you turned in.”

Victor Krulak, a retired Marine Corps general who at the time was director of news and editorial policy for the Union and what was then the Evening Tribune, responds, “I don’t remember that, but I doubt it.” Asked whether then-publisher James S. Copley’s long and documented relationship with Richard Nixon and the Republican Party influenced the paper’s editorial coverage, Krulak says, “I guess it’s mainly in your point of view. But Mr. Copley was remote from the editorial business, so I don’t think that’s a fair statement. It was a long time ago and I could be wrong, but I don’t believe that’s a fair statement.”

A perusal of back issues of the San Diego Union, however, suggests otherwise. The scandal that ultimately cost San Diego its convention broke on February 29, 1972, with syndicated columnist Jack Anderson reporting that he had obtained a confidential internal memo from ITT lobbyist Dita Beard that stated the $400,000 convention contribution would favorably influence the federal antitrust action. The story made headlines in papers across the country the following day, while the Union buried it in the fifth paragraph of an article on local convention fundraising.

On March 5, the Los Angeles Times and other newspapers ran the complete text of the memo Beard had allegedly written to the head of ITT’s Washington, D.C., office. In it, she states that ITT’s “noble commitment [$400,000] has gone a long way toward our negotiations on the mergers eventually coming out as [ITT president] Hal [Geneen] wants them. Certainly the president has told [Attorney General John] Mitchell to see that things are worked out fairly”

The Union did not publish any portion of the memo — which triggered a Senate Judiciary Committee probe — until March 20, when it reprinted a few paragraphs in a belated overview story headlined, “ITT Role Bared in Tardy GOP Convention Bid.”

In the meantime, other newspapers had already covered the developing scandal in great depth and detail. Some, like Life magazine, expanded on it. The Los Angeles Times ran a related piece in which it claimed the Justice Department loophole was letting fat-cat Republican donors write off their contributions on their income tax returns. The same week as the Times story, the Union ran two articles blasting the Senate Judiciary Committee’s investigation into the ITT scandal. In one, a Republican senator from Kentucky accused Anderson of conspiring with Democratic Senators Birch Bayh and Edward Kennedy to “discredit government officials despite the absence of wrongdoing of any kind in the ITT case.”

The Union also consistently editorialized against the investigation.

•On March 3, just three days after the scandal broke, the Union blasted the Senate Judiciary Committee for “trolling at various depths on what has aptly been called a ‘fishing expedition’” The editorial called the connection between ITT’s offer of $400,000 and the favorable settlement of the federal antitrust suit a “coincidence [that] apparently was more than capital gossip-mongers could resist,” and called on the committee to “reel in its line and head back to shore.”

•On March 14, the Union compared ITT’s gift offer with its installation of telephones at the Democratic National Convention, even though the Democrats were still $1.5 million in arrears from 1968. “In each community [ITT] joined in local efforts to support the conventions,” the Union said. “In both communities the total local effort is comparable, and nothing wrong appears to have been done.”

•And in an April 8 editorial on the decision by the Senate Judiciary Committee to expand its ITT probe, the paper opined that “the mountains of evidence submitted so far have proved nothing adverse… The [committee] is wasting its time if it simply rewarms the same hash. From all that we have seen so far, the ingredients of the hash leave much to be desired.”

Through it all, lobbyist Beard denied even having written the memo. But in early April, the Baltimore Sun newspaper quoted Representative Bob Wilson, a leading San Diego Republican with close ties to the Nixon administration, as saying Dita Beard had told him she had, in fact, written a memo specifically linking financing of the convention with the favorable court settlement. The basis for the Sun story: a previously unpublished, taped interview of Wilson made March 3 by San Diego Union reporter Robert E. Cox.

According to a story that ran the next day in the Los Angeles Times, “the reason the San Diego Union did not publish the newly revealed statements by Wilson, [Union editor Gene] Gregston said, was that ‘a lot of it just didn't seem pertinent at the time.’ ... How did the Sun get Cox’s interview of Wilson? Gregston chuckled: ‘The Baltimore Sun reporter happened to be in town, in what connection I don’t know. But he knew Bob Cox and they sat down together one night just to play the tape. And that’s how they got it.’”