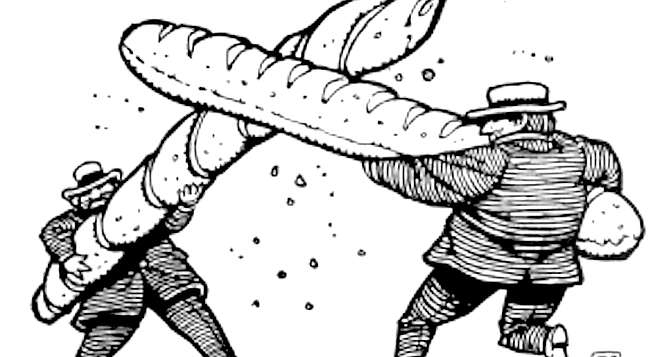 Wait long enough and your cheese puffs and Wonder bread will eventually turn to lumps of damp, furry mold, probably about the same consistency. But since both have a shelf life longer than Napoleon brandy, you may have to leave them to your heirs before the full effect is achieved.

When bread goes stale, it’s sort of “unbaking” itself. At the molecular level, at least. Lots of the mysterious things that happen in the oven undo themselves in the breadbox. Just-baked bread is a sort of fragrant, fluffy, unhardened concrete — a moist mass of gluten (the protein component of flour) studded with damp, gelatinized starch granules and filled with big gas pockets. As the bread cools below 140 degrees, certain molecules inside the starch granules realign themselves, close ranks, and stiffen, squeezing out water absorbed during baking. Once the gel around the starch stiffens, the bread is firm enough to cut. This is bread’s optimum point. Staling begins pretty much immediately.

Slower-moving molecules in the starch granule and gluten now begin to realign and stiffen, gradually forcing out even more water. Within a week or so, you have a loaf of crumbly, dry starch and gluten covered with a leathery crust that has absorbed the squeezed-out water molecules. This process happens even in a sealed environment where no water can evaporate from the loaf. And it works much faster at cold temperatures. (Don’t store bread in the refrigerator. Eat it fast or freeze it.) Any “stale” taste is natural molds beginning to sprout. The industrial solution to all this? Vats of preservatives that slow the migration of water molecules and the growth of molds.

Crispy stuff, on the other hand, is crispy because the moisture has been baked (or fried) out of it. So crisp things don’t have the same internal chemistry as a donut or a dinner roll. Sugar will also crispify baked goods. When sugar is heated, it turns to caramel but crystallizes again when it cools. And sugar crystals are hygroscopic; they absorb moisture from the air. So a crisp cookie is like a delicious sponge.