The billions of orange peels left by Tropicana and Minute Maid

End up in cattle feed 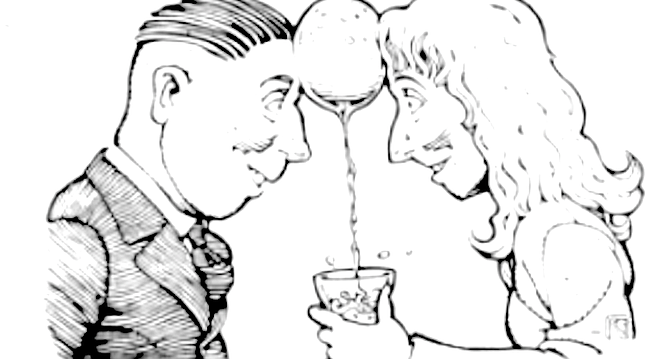 Dear Matthew Alice: As someone who has always lived in the city, I was ill equipped to answer the following agricultural questions my teenager asked after he looked at an orange juice container. First, what do companies like Tropicana and Minute Maid do with all the billions of orange peels they create each year? Is there a use for them ? Second, why is orange juice in containers made from concentrate? Why is the water removed from the juice, then put back, then put into the container? Why not eliminate two steps and just squeeze the juice into the container? — E.L. Stein, San Diego

Dear Matthew Alice: I’m continually amazed at the number of food items on our market shelves that are from distant and exotic lands. I feel this must be, for the most part, in the interest of "saving money”...(whose money, I wonder). A recent discovery really has me wondering why my apple juice contains juice from the following countries: USA, Germany, Austria, Hungary, Chile, Argentina, and New Zealand! Come on. Aren’t there plenty of good apples (never mind willing employees to process them) right here at home? — Sandy (one a day keeps the doctor away) M., downtown

I’m glad to see there are still a few starry-eyed folks who can look at a glass of juice and imagine rosy-cheeked, smiling farmers in Florida or Washington carefully picking only the sweetest oranges or apples from robust trees, carrying the baskets to Ma in her sunny country kitchen, where she gently presses out the juice, packs it, loads it into the family pickup, and delivers it to your breakfast table. Truth be known, fruit juice is a major element of big-time international agribusiness (which shuffles around the globe absolutely every type of edible, from squid parts to passion fruit). That morning eye opener is probably better traveled than most of the people who drink it.

Snapplemania is just the latest example of a 15-year obsession Americans have had with fruit juice products. As a result, the U.S. industry is forced to be a net importer of fruit juice concentrates, particularly orange and apple. Depending on weather conditions in our major growing areas and some other factors, as much as 50 percent of the apple and orange juice you drink was squeezed from foreign fruit. American orchards cannot begin to satisfy the demand, even though about 90 percent of U.S.-grown apples and oranges are ultimately converted to juice. According to the folks at Tropicana, they can process 60 million oranges a day, presumably domestic fruit. A mind-numbing figure. But they still must import concentrate to meet demand. One-half to three-quarters of the world’s supply of orange juice concentrate ends up here.

To get the real OJ picture, consider Brazil, the country that supplies us with most of our imported orange juice concentrate. They harvest and juice the fruit, then remove water to reduce the juice to a six- or seven-to-one concentrate (why waste space and money schlepping water around the world?). It’s pumped into the holds of refrigerated ships and dispatched to tank farms in such places as Florida, Delaware, New Jersey, and Holland. (I had to ask — and the Tropicana spokesorange told me — there has never been a major orange juice concentrate spill at sea. Crude oil seems to be the only magnet for tanker collision disasters.) Some of the tank farms enhance the concentrate by adding orange flavoring extracted from the peels, then the juice goes by rail or truck tankers to the processors, who carefully blend the available domestic and foreign concentrates to control for color and taste and to meet FDA standards, then package it and ship it to stores. That’s the basic itinerary for your morning OJ.

Apple juice is in less demand, but because of seasonal growing variations and taste differences, the sources for apples must be more numerous and widespread to keep a continuous supply. Central Europe is our biggest supplier. By the way, according to Consumer Reports, that “apple a day” theory is wishful thinking; calorie for calorie, apple juice doesn’t supply much by way of nutrition. A very few minerals, maybe. Apple juice is mostly water and fruit sugar.

As for what happens to all the rinds from that mountain of oranges Tropicana processes, the nutrition in them (and apparently there is a lot) eventually comes back to us in the form of hamburgers. Tropicana and other processors dry the rinds, chop them up, and sell them for cattle feed.