All about cricket chirping

There are at least four different cricket “songs” 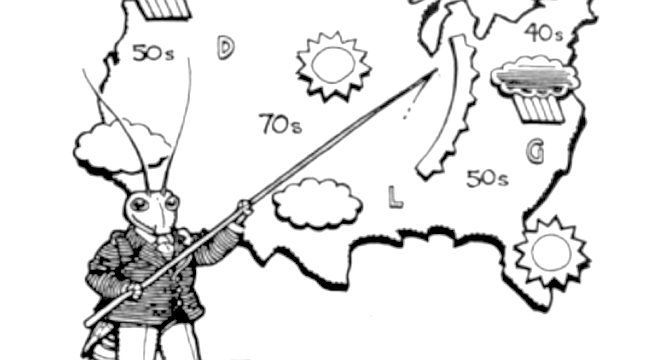 Dear M.A.: I was told that if you count the number of chirps a cricket makes in 15 seconds and add that number to 39, you would have the approximate temperature. Is that true or is someone pulling my leg? — Brad, San Diego

I can see where you might suspect somebody’s trying to sucker you into some entomological version of the old snipe hunt trick. Deposit you out in the boonies some night to count cricket chirps so they can have a good laugh the next day. But unlikely as it may seem, this story’s true. In fact, we’re only four years away from the centennial celebration of one underappreciated scientific achievement — the discovery of the so-called thermometer cricket (Oecanthus niveus). At least three of the 3000 species of crickets have been studied to find some linear relationship between chirps and temperature. Each yielded a slightly different formula — chirps plus 37 or 39 or 40, depending on which one you’re listening to. One scientist helpfully suggests you can work the trick backwards by taking the temperature (Fahrenheit), multiplying it by 4, and then subtracting 160 to predict the number of chirps crickets will make on a given night. That seems like a lot of paperwork to me, but I include it in an effort to be thorough.

Crickets make their surprisingly loud noises by rubbing their wings together. The wing undersides contain a rough, ridged patch, and the upper sides have one elevated ridge. At rest, the wing edges overlap, so when the cricket feels a chirp coming on, he slightly raises both wings away from his body and rubs one across the other. (I use “he” advisedly*, only male crickets chirp.) Since both wings contain the chirp generators, it doesn’t matter whether he’s lapped left-overright or right-over-left. One less worry to clutter up his busy day.

There are in fact at least four different cricket “songs” or patterns of chirps, three of them related to reproduction and the fourth the equivalent, I guess, of the Rocky theme — the “rivalry” song, when one cricket invades the territory of another and the two of them square off for a fight. Under these circumstances, both crickets chirp the rivalry song while they’re circling around one another, sizing up the competition and waiting for the first punch to be thrown. Once the scuffle is over, the winner repeats the song just to kind of rub it in. Can’t say I’ve ever seen this, but it sounds more entertaining than TV. No wonder in the Far East cricket fighting is a sort of national sport, the miniature equivalent of cock fighting.

Since there are several thousand species of crickets, each with its own characteristic chirp (to cut down on confusion at mating time), and each species has four versions of its particular chirp pattern, I suspect the temperature formula doesn’t work equally well for every species and every song. But if you’re stuck in the woods and just have to know what the temperature is, crickets will give you a good rough estimate. But since crickets are most vocal at night, unless you have a watch with a glow-in-the-dark second hand, I can imagine you’d have some problems counting chirps while also counting “one, Mississippi, two, Mississippi..." I’ll leave the details to you. Personally, I’ll just wait for the weatherdude on the evening news.