The origin of golf links

At least we can say is is Scottish 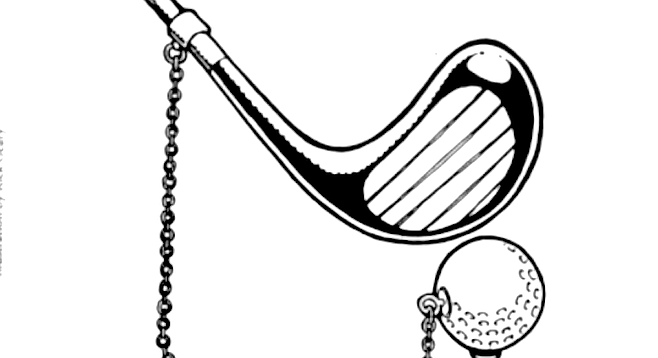 Yo, Man hew: A golfing bud of mine and I have had this ongoing discussion about the origin of the term "links. ” I say a golf course is called that because all the holes are linked together; he says it's because the German word for left is links, and sometimes golfers hit the ball to the left. Please help. If I'm going to play this stupid game, I want to know its rich history and origins. — R. Von Gyurcsy, Irving, TX

1 don’t know which guess is dumber. Well, no matter. Golf does that to people. Nothing but long periods of boredom punctuated by cursing and thrashing through shrubbery. Are we having fun yet?

But aye, laddie, the futile pursuit is lousy with history...the romance of the dene and the bum and the gorse and the whins. The Firth of Forth, and the Firth of Tay, and the hoary Royal and Ancient. The world’s most tediously famous golfaterium is the “Old Course” in the town of St. Andrews, Scotland. (How many Saturday afternoon TV time slots have been filled with grainy documentaries of bearded, tweedy old farts in knickers and porkpie hats teeing off on the sacred course while the rest of the world was busy fighting some world war or other....) The Old Course, one of three in the town, is basically a nature-designed playing field that’s been given a little assistance here and there by man. It runs along the shore of the Bay of St. Andrews and is composed of hillocks, dunes, sand pits, rabbit holes, streams, and pools and is covered with a mixture of vicious grasses and wind-toughened scrub. That characteristic piece of Scots seaside landscape is known as a links, whether there’s a golf course on it or not. In another time and place, it might have been dozed into oblivion and covered with cottages; instead, the links of the town of St. Andrews is the most hallowed ground to duffers everywhere. Though revered, renowned, “the golfers’ Mecca,” “cradle of the game," ad nauseam, St. Andrews is a public course.

Recorded matches on the links go back into the 14th Century. The game is said to have been “invented” much earlier by a Scottish shepherd killing time by trying to knock rocks into rabbit holes with his crook. The world has been infested with crazed golfers ever since; and ever since, St. Andrews has been the arbiter of all things golfish. The basic rules of the game, all 13 of them, were set down there in the mid- 1700s. Rule seven required that on the green, you must hit your ball toward the hole, you couldn’t suddenly switch to croquet mode and aim at your opponent’s ball to knock it into oblivion.

But to return to your query, golf courses are called links because links land in many towns in Scotland was dedicated to the game and thus became the town’s golf links. Some purists still insist that “golf links” are only those 18-holers that meet the original Scots definition of the word and that all other pretenders are mere “golf courses.” Too silly an argument for me to bother with. Mind if I play through?