Running in rain will keep you dryer 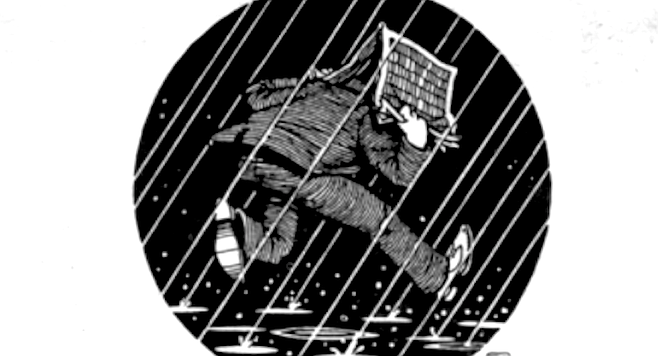 Dear Matthew Alice: Settle an argument. Does it really do any good to run from your car to your house when it’s raining? Do you actually stay drier or do you just run into more drops and get as wet as if you'd walked? — The Battling Jensens, San Diego

Near as I can tell, this question arrived in the Matthew Alice mail processing center (exit from I-8 at the runaway truck ramp east of Jacumba) early in the Ford administration. It was summarily flipped into the bin marked “Fat Chance,” repository for all queries too goofy to be taken seriously. It has languished there ever since. Imagine my chagrin, then, to discover recently that not only the Jensens, but two physicists and a mathematician have wondered along the same lines. By now I’m sure the Jensens have divorced, moved from San Diego, and couldn’t care less about the whole thing. But since I’ve happened upon the answer and gone to the trouble of exhuming their letter, here it is, courtesy of Jay Ingram’s book The Science of Everyday Life (Viking, 1989).

The three scientists who admit to having frittered away their PhDs on this poser basically agree with what any two-year-old could have told you: Run through the rain and you will probably stay drier than if you stroll. The two-year-old, of course, couldn’t couch his answer in impenetrable scientific journalese, a skill that requires years of study. And keep in mind that the professors’ “rain” and “runner" are mathematical models, inhabitants of an eerily uniform and tidy universe also unknown to our toddler.

Physicist number one calculated the number of drops that land on your head and the number that you run into as you move forward. In his perfectly vertical computerized rainstorm, the hit rate on the top of your head is unaffected by your pace, but you’ll encounter face-first more drops per unit time but fewer drops overall if you hurry. Reduce the body surface that runs into the drops, suggests the professor, and you’ll stay drier. Our toddler recommends an umbrella.

The mathematician’s calculations say that the faster you move, the drier you’ll stay, but speed and dryness do not vary at the same rate. Running flat-out doesn’t keep you much drier than proceeding at a trot, so save your energy. Our toddler says buy an umbrella.

Physicist number two considered the fact that most rainstorms are accompanied by wind. If that wind is blowing into your face or side, running will keep you slightly drier. But if the wind is behind you, the faster you run, the wetter you’ll get because you will overtake and run into drops that would miss you if you had walked. The professor giddily calculated the wetness factor for a perfectly horizontal rainfall; if you match your pace to the wind velocity, you’ll stay dry. The two-year-old and I suggest that if the doc stepped out of his lab occasionally, he’d realize that the gale required to blow raindrops horizontally would probably knock you over into a puddle, drenching you completely. In that case, stay home, sez our two-year-old.