What they didn't tell you about Mr. San Diego 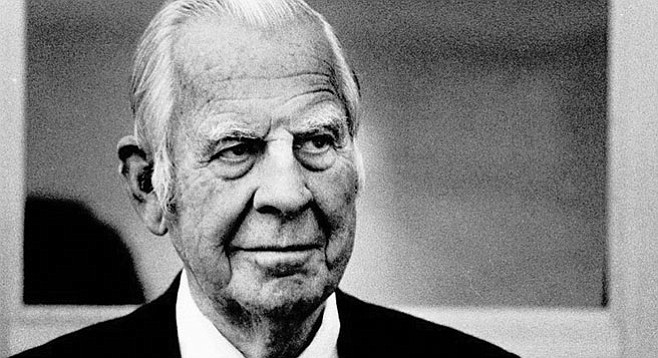 The death of shopping center czar Ernest Hahn last week got plenty of coverage in the San Diego Union-Tribune. There were three stories and one editorial the day after his death, and a fourth story and a Neil Morgan column after his funeral. All trumpeted Hahn’s accomplishments and legacy. Morgan even referred to the developer as “Mr. San Diego,” an honor he received in 1990 from the San Diego Rotary Club. 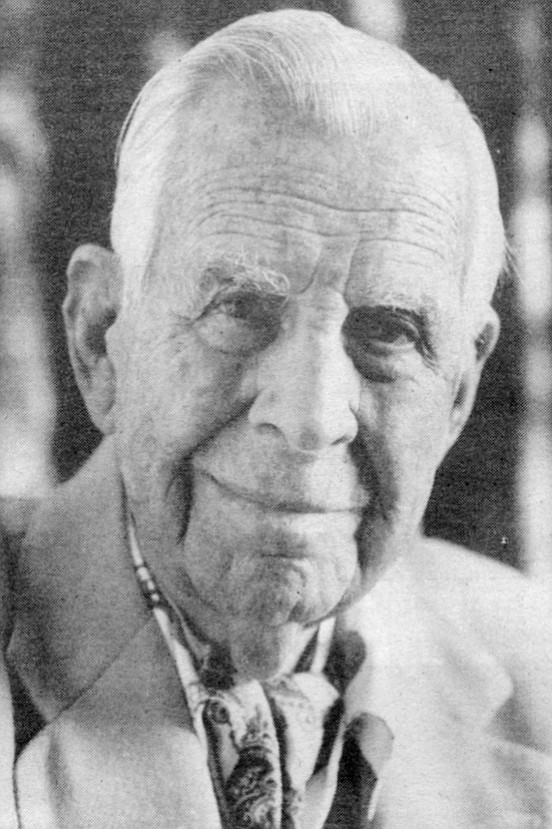 C. Arnholt Smith. Hahn approached Smith with the idea of building a shopping center in San Diego — this time as a full partner rather than just a lender. The result was the Fashion Valley Shopping Center

Oddly enough, there was no mention at all of Hahn’s ties to another one-time Mr. San Diego, C. Arnholt Smith, who had received the honor in 1961. The failed financier bankrolled Hahn’s very first shopping center back in 1967, La Cumbre Plaza in Santa Barbara. Smith also made Hahn a director of his United States National Bank, the notorious San Diego financial institution whose collapse in October 1973 ultimately led to the fall of the House of Arnholt.

Smith and Hahn initially met in the middle 1960s, when U.S. National Bank — then at the peak of its bank-buying spree — purchased a small Hawthorne, California, financial institution called Pacific State Bank, which Hahn had co-founded. Hahn, who also served as Pacific State’s president, was promptly elected to U.S. National Bank’s 18-member board of directors. 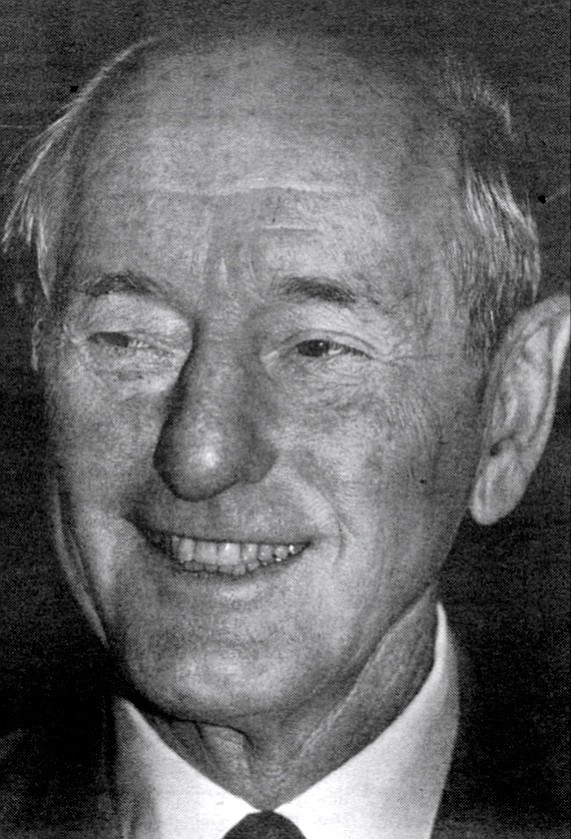 Ernest Hahn: “Smith did everything first class, even if it wasn’t with his own money. I feel sorry for him, having to end his life with this [disgrace].”

In a telephone interview, Smith, now 93, recalled the deal: “We were looking for bank locations in that general area there, so we made a cold call on them, to see if they would like to merge with U.S. National Bank. And out of that conversation came the deal.”

At the time, Smith says. Pacific State was in trouble. “There were loans they couldn’t collect,” he says. “Like so many of the smaller banks, they were loaning money to builders and developers, and they either had to increase their capital or fold up, liquidate. So by taking them over, we, in effect, cured their troubles”

It didn’t take Hahn long to return the favor, Smith says. “In acquiring banks, we always used to give the selling shareholders a ‘put.’ If they were unhappy with the price they received, or for any reason wanted out, we would buy their stock back at the end of the year and cash them out. In connection with that, we followed the usual procedure, but that was about the time the Vietnam War broke out and everyone was nervous as hell.

“The contract we had [for buying banks] included a clause stating that in the event of war, we would not buy back these people’s stock, and they should know that at the time. But after the words, ‘in the event of war,’ some smart lawyer had inserted the phrase, ‘declared by Congress,’ and I missed that.

“With the threat of war, all the securities dropped. And since there had never been a formal declaration of war —that was a police action — everyone came down on us to buy back their stock. We demurred, saying, ‘Look, we said in the event of war, we would not do that.’ But they said, ‘The contract said only in the event of a war declared by Congress, so we are not in a war and we want to exercise our put.’

“And I will give Ernie credit: He argued with his people and said they should stand by and not put their stock back on us. A lot of other people from other banks we had acquired did put their stock back on us, and it was pretty disastrous, because we had paid a hell of a price for that stock and now it was worth a whole lot less. Those three words, ‘declared by Congress,’ probably cost us over a million dollars. But Ernie got his group to stand by us, and they were among the only ones who did.”

Hahn subsequently approached Smith with the idea of building a shopping center in San Diego — this time as a full partner rather than just a lender. The result was the Fashion Valley Shopping Center, a joint venture between Ernest W. Hahn Inc. and Smith’s Westgate-California Realty Company. The center cost $50 million to build and opened in October 1969 on 78 acres of land in Mission Valley, on the former site of Smith’s Valley Lane Farms. The ranch included Westgate Park, the former home of the San Diego Padres baseball team.

“And he came back and told me the best location he had found in San Diego was at the foot of Sixth Street/ Fifth Street, where we had a ranch down there. ‘This is the place to go,’ he told me, and I took his word for it.

“The fact that we put up the land made it so much easier for him to obtain [additional] financing. We threw the land in and he used it as collateral.”

Smith concedes he was somewhat reluctant, at first, to become a partner with Hahn. “You have to remember, when he first came back to us and said the right location for a shopping center was down at that ranch of ours, everyone thought he was nuts.

“But as it turns out, he was right. It was right in the center of the growth of the city, it was very accessible for people getting in and out of there, and it went over like gangbusters, right from the start.”

Smith later helped Hahn with the financing for several other, smaller San Diego shopping centers. “We did the financing for two or three of them,” Smith says. “But eventually, he got such a reputation that he didn’t need much help from us anymore. He was so successful that he started getting big loans from the teachers’ pension fund.” In the meantime, Smith says, Hahn continued to perform his directorial duties with U.S. National Bank. “He was a very helpful member of the board — a man of his word, a doer,” Smith recalls. “I remember one time he had a development in Spain, and of course he didn’t want to be bound by what the board did while he wasn’t here. So he came and wanted to resign from the board, and I said, ‘Well, don’t do that, I’ll give you a vacation,’ and I excused him from any activity that the bank undertook while he was away. When he came back, he became an active board member again.”

In 1973, however, Smith and Hahn’s working relationship came to an abrupt end with the collapse of U.S. National Bank, which was declared insolvent on October 18 of that year by the U.S. Comptroller of the Currency. The Federal Deposit Insurance Corporation seized the bank and sold off its assets to partially satisfy debts estimated at $400 million. Crocker Bank of San Francisco took over U.S. National’s commercial banking and trust business.

In 1974, Smith pled no contest to federal fraud charges and was fined $30,000. Five years later, in Superior Court, he was convicted of tax fraud and theft in the embezzlement of $8.9 million; after several appeals, he ultimately spent eight months in county jail and paid $681,000 to the state Franchise Tax Board.

At the time of the bank’s collapse, Hahn had been on another leave of absence from the board — this time, for a two-year period, so he could serve with a national shopping center association. But that did not immunize him from the legal consequences of U.S. National’s failure.

Two weeks after the seizure came the first in a series of lawsuits filed by shareholders, accusing Smith, Hahn, and other past and present bank directors of securities fraud, violations of the National Banking Act, improper acts of controlling shareholders, and fraud.

The Federal Deposit Insurance Corporation also filed suit against the directors, charging them with negligence, breach of statutory duty, and breach of fiduciary duty, and asking for more than $410 million in damages. The suit claimed Smith, Hahn, and the other directors “failed, neglected and refused to perform properly their duties as directors [and thus] caused, authorized and permitted USNB to engage in unsound and irregular banking practices, [resulting in] the insolvency of USNB and the losses, deficiencies and damages resulting therefrom.”

In a 1988 article in the San Diego Tribune, Hahn said he estimated a settlement with the Federal Deposit Insurance Corporation and attorneys’ fees associated with defending himself in the other suits cost him “between $1.5 million and $2 million.”

In the same article, he said he had no hard feelings toward Smith, whose interest in the Fashion Valley site he had since bought out for $9 million. “He did everything first class, even if it wasn’t with his own money,” Hahn was quoted as saying, praising Smith for his vision in triggering the revival of downtown with his bank building and adjacent Westgate Plaza Hotel. “I feel sorry for him, having to end his life with this [disgrace].”

For his part, Smith has nothing but praise for Hahn. “We used to talk a lot about which way the city should go, or what they should do,” Smith recalls. “We agreed about a lot of things. I have great respect for the man. He was the visionary one, as far as shopping centers are concerned.”