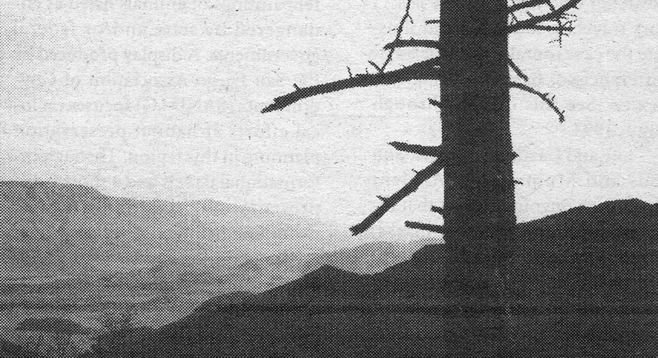 Although Garnet Peak isn’t the highest peaklet along the eastern escarpment of the Laguna Mountains, its exposed position makes it a fine place to view both the pine-clad high country and the raw desert below. Now through January, whenever east or north winds chase away air pollution and haze, Garnet Peak is simply the best spot in the morning sun. Around 6:45 to 7 a.m., the sun’s flattened disk pops up over the desert wastes of northwestern Sonora, Mexico, some 150 miles away. On the clearest mornings, you can witness the almost-mythical “green flash”; an optical phenomenon familiarity associated with the sun’s disappearance over the Pacific Ocean in the west but seldom noticed when the sun reappears in the east.

The Garnet Peak Trail, 1.2 miles long, starts near mile 27.8 (as reckoned by the green milepost signs) on Sunrise Highway. This is about five miles north of the small resort community of Mount Laguna. Park your car nearby, off the pavement, and take the signed Garnet Peak Trail north. After one-half mile in Jeffrey pine forest, you emerge in the open and cross the Pacific Crest Trail. Continue north on a rocky path slanting upward. Bleached yucca stalks, left from the flowering season half a year ago, poke through the trailside ceanothus and manzanita like exclamation points. This is an ankle-busting trail, especially at dawn when the seemingly substantial, angular stones caught in your flashlight beam still manage to roll unexpectedly underfoot.

Garnet Peak’s summit consists of layered chunks of schist, a type of metamorphic rock seen along much of the Laguna escarpment. The peak falls away abruptly, revealing a vertiginous panorama of Strom Canyon and its distant alluvial fan toward the east. The Salton Sea and Baja’s Laguna Salada (just south of the border) shimmer in the east and southeast, respectively. To the south and west, the Laguna crest, dusky with oak and pine forests and patches of chaparral, seems to roll like a frozen wave to the edge of the escarpment.

NOTE: The information in this archived article may not be current. The Jeffrey pine forest below Garnet Peak was severely burned during the 2002 Pines Fire.