The Union-Tribune’s midnight massacre of their dealers

A contract dispute with the U-T's distributors

These aren't exactly the best of times for the San Diego Union-Tribune. Advertising is way down, with retail and lineage for 1992 about 16 percent lower than it was in 1991. 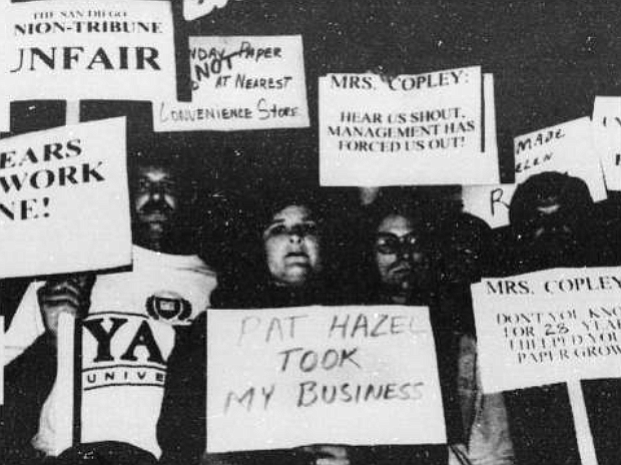 Cleaver and 24 other dealers refused to sign the final contract. As of last Saturday night, they have all been put out of business.

And now 25 of the 52 dealers responsible for most of the Union-Tribune's single-copy sales have filed a lawsuit, accusing the Copley Press of breach of contract and bad faith for trying to dump their longtime contract in favor of one the dealers consider unfair.

The lawsuit, dealers say, comes after six months of failed attempts at negotiations that climaxed in a night-time "strike bust" and a shot, in the dark, from a rifle.

According to a recent survey by the Leading National Advertisers, a trade association, the Union-Tribune carried 1,849,289 inches of retail advertising in 1992, down from 2,188,907 in 1991. Making the drop even more significant is the fact that the 1991 figure was for the Union alone, prior to its merger with the Tribune early the following year

Other newspapers around financial squeeze may have precipitated the drafting of the new contract, which effectively gives the Union-Tribune the right to sell its newspapers directly and thus eliminate the extra expense of the middleman.

"There is no doubt in my mind that the intent here on the part of the Union-Tribune is to generate more money at the expense of certain individuals' livelihoods," Drasnin says.

The dealer problems involve the 52 independent contractors who distribute about 100,000 newspapers daily and 165,000 papers on Sunday to vending machines, newsstands, convenience and grocery stores, hotels, and the airport. They purchase the paper for between five cents and 15 cents a copy and operate under yearly contracts.

According to Drasnin, the trouble began a year ago, when Pat Hazel, the Union-Tribune's director of marketing, held a meeting with 15 of the largest distributors. He informed them of the paper's plan to cut the number of distributors from 52 to 40 by eliminating a dozen routes, Drasnin says. The top 15 dealers simply wouldn't go for that "He was holding a carrot in front of them, saying, in effect, 'We can make you bigger and better at the expense of your peers,' and that type of corporate cannibalism wasn't palatable to them."

This May, 35 dealers banded together as the San Diego Single Copy Dealers' Association. Burt Cleaver, whose route encompasses the Golden Triangle and involves the distribution of 14,000 daily papers and 3600 Sunday papers each week, was elected president.

"We felt we needed to have a united stance with the contract coming up and the company stalling in getting it to us," Cleaver says. "We felt some people were going to take a serious pay cut or lose their businesses entirely, and we didn't want that to happen."

On June 22, the dealers received a letter from Hazel, informing them that the new contract was not ready and asking them to sign an amendment extending their current contracts from July 5 to July 31. Hazel asked that the amendments be turned in no later than July 1.

The dealers did not turn in their extension agreements on July 1. Instead, they handed them over to their attorney "because we wanted to get a meeting with the company," Cleaver says.

The next day, July 2, Hazel sent dealers a second letter. "As of July 2, we have not yet received your signed amendment to extend our current contract to July 31, 1993," Hazel wrote. "As you know, your current contract will expire at 12 midnight, July 5 1993. If we do not receive your signed extension amendment by July 4, 1993, it will be necessary for the Union-Tribune to make other arrangements for the delivery of newspapers on the route covered by your contract. If you do allow your contract to expire, the Union-Tribune will assume all responsibility for delivery of newspapers on your route as of July 6. In that event, you would need to remove all locks and copies of newspapers from the newsracks on the route no later than midnight, July 5."

That evening, single-copy division managers began accosting dealers in the Union-Tribune parking lot, personally delivering Hazel's letter and urging them to comply, Drasnin says. "During the course of the evening, the managers even began showing up, unannounced, on the dealers' doorsteps. It was a strike bust without a union."

Leon Grodeman, who distributes 9600 dailies and 2500 Sunday papers each week in South Bay, was one of the recipients of these late-night visits. "We called it the 'midnight massacre,'" he says. "They came down to my house at 9:30 at night. It was a control thing; they were trying to intimidate us, harass us. They wanted me to sign it right then. They were kind of panicky; it was just ridiculous."

Randy Berlin, who services 60 newsracks and 30 newsstands in Mira Mesa, and has been a dealer for 16 years, also received a visit. The next day, he was terminated after an incident involving a rifle shot. Berlin says his attorney asked him not to discuss the case, but according to a Superior Court declaration, "On Friday night, July 2, 1993, at 9:40/9:45 p.m., a brown Mercedes unknown to me drove up my private drive [in Valley Center]. A stranger exited the vehicle. I asked him to leave, informing him he was on private property and that it was a private drive. Instead, the stranger identified himself as being with the Union-Tribuneand walked toward me with an envelope. I refused receipt of the envelope. The stranger was told again to leave ... and he re-entered his car, dropping the envelope on the drive.... As I first left my house when the car drove up the drive, I picked up a rifle, which I keep by the front door. At no time was the rifle pointed at or near any individual. At the same time the brown car was leaving my driveway [and] I bent to pick up the envelope left by the stranger, I slipped on the edge of the driveway and the rifle accidentally discharged in the air. At 12:45 a.m. on Saturday morning, the Union-Tribune refused to deliver papers to my agents and effectively seized my dealership."

On Sunday, July 4, Cleaver grudgingly delivered the signed extension amendments to Union-Tribune management. "We consulted with out attorney, and he felt we better get them [the amendments] back there because they had really put the gun to our heads," Cleaver says. "The threat was real; we were in fear of losing our businesses, so we felt we had better comply."

Two days later, Cleaver and the other dealers had their first look at the new contract itself. The biggest objection they had, he says, was that it changed each dealer's territory into a 'nonexclusive geographic area, with the Union-Tribune expressly given the right to compete directly and sell the paper within the distribution area."

"That really galled a lot of people," Cleaver says. "We never had anything like this before. What it says, in effect, is that the company will give us areas to service, but at any time they can come in and take over any account. I have one Vons store that I deliver to that sells up to 800 Sunday papers. Under this new contract, they could come in and say, 'We are now going to handle this store.' So there's not security. I could be left with the garbage accounts, while the company gets to keep the cream."

Even so, Cleaver says, some dealers "blindly signed" the new contract, while others "negotiated and got a few little language changes." Dealers were notified that if they did not sign the new contract by July 31, they would no longer be provided with newspapers and their newsstand newsrack locks would be forcibly removed.

Cleaver and 24 other dealers, however, refused to sign the final contract, opting, instead, to file a lawsuit against the paper. And as of last Saturday night, they have all been put out of business.

"Nobody wanted to lose their businesses," Cleaver says. "We have generations involved, families involved, brothers involved. But these people stood by their convictions. It has very little to do with money; it has more to do with the fact that the company wanted to write a contract that would remove our security of doing business with them. And that's just not something we could live with."

Hazel, now circulation director, was not available for comment. "He's on his honeymoon," his secretary says. And Larry Riley, the special projects manager charged with getting the contracts signed, simply says, "I don't want to make any comments at this time."