How a fastball rises

With all due respect to San Diego native Dave Morehead, who pitched his no-no back in 1965 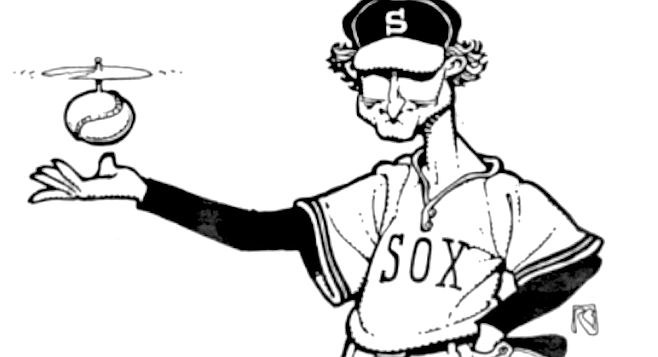 Dear Mr. Alice: My friend Jake and I have a controversy we wondered if you could help us settle. Does a rising fastball actually rise or is this term a misnomer? I say the ball doesn’t actually rise from the point it leaves the pitcher’s hand (barring a huge gust of wind), but he vehemently disagrees and cites as authority a fellow law student whose father (Morehead) was the last hurler to pitch a no-hitter in Fenway Park. What’s the real deal? — David Jackowitz, San Diego

The real deal is never get into an argument with a law student. Aggravation City. Can’t tell them a thing. Case in point: rising fastballs. With all due respect to San Diego native Dave Morehead, who, by the way, pitched his no-no back in the late Cretaceous period (1965), a rising fastball does not rise above the point of release. As it passes the batter, it’s heading down, just like every other pitch. I cite as my authority Robert Adair, Yale professor of physics, baseball junkie, and one-time “honorary physicist to the National League,” a wry joke of the late commissioner Bart Giamatti. Adair wrote The Physics of Baseball at Bart’s urging to help settle such off-season arguments as “Does a curve ball really curve?” and “Does a rising fastball really rise?”

Sparing you the details of Magnus coefficients and Reynolds numbers, for an overhand (“rising”) fastball to reach the plate simply at the point of release, the backspin applied to it would have to counteract the force of gravity plus the initial downward trajectory of the thrown ball (necessary if a six-foot-plus pitcher standing on a ten-inch-high mound has any hope of landing an overhand pitch in the general vicinity of the strike zone once the ball’s traveled nearly 60 feet). To make the ball actually rise above this point would require even more backspin. No matter how fast the ball is thrown and no matter how much action the pitcher can get on it, gravity will cause it to drop around three feet (from the horizontal, at the point of release) between mound and plate. Compared to a relatively spinless split-finger fastball, air pressure differentials created by the rising fastball’s backspin keep it from deviating any more than a few inches from an imaginary straight line drawn between release point and the catcher’s glove. If things go as planned, a rising fastball will whip by the batter about letter-high (still on a downward trajectory) while the split-finger gets him around the knees. So a rising fastball doesn’t rise (nor does any other pitch, except occasionally in softball), it just doesn’t fall as far as the batter anticipates. It’s a perceived thing, not a real thing. One more way to mess up the batter’s timing and aim, which is a pitcher’s basic job.

Adair puts the tag on a few other baseball “truths,” like the idea that a batted ball is slowed down on a humid, ominously stormy day. Because of the lowered barometric pressure, the ball should actually travel farther. And ask that argumentative friend of yours which major league ball park (before the advent of Denver) was located at the highest altitude, thus giving some slight barometric advantage to batters and fastball pitchers. Fulton County Stadium, altitude 1050 feet; a ball hit 400 feet in sea level San Diego would potentially travel 408 feet in Atlanta.