The death of the San Diego Tribune

Madam, God Himself could not Raise this ship! 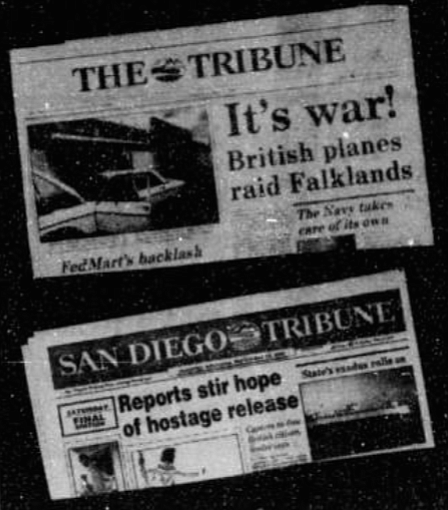 1981-1991: The 1980s brought a spiffy new logo for the paper, which dropped the Sun and Journal credits and shortened its name to The Tribune. In 1989 it became the San Diego Tribune.

On the day it was announced that the Tribune was folding — er, merging with the San Diego Union — a lot of things happened that didn't quite make it into the front-page story that afternoon or the follow-up the next day.

At 8:30 a.m., when Morgan officially broke the news to the Tribune staff, he said, "Not that it's going to be any great comfort to you, but Helen Copley ... this was not a casual and mercenary decision. She volunteered yesterday to come down here and break the news with me but finally decided she'd better not because, she said, 'I think I'd break out in tears.'" One reporter quipped, Yeah, I hear she's real choked up." Another added, "If she came down here, she'd be choked, all right."

Shortly after the meeting, a reporter made up a flier that he posted on the newsroom's two bulletin boards. He pasted the Trib headline announcing the end of the Persian Gulf War, "It's Over ... And Now...," on a sheet of paper and wrote under it, "Let's commiserate. Red Lion, 4 p.m."

After word leaked out that there would be a staff meeting in the Union newsroom at 2:30 p.m to discuss the merger, Morgan called a Union reporter and asked him to tape record the meeting for him. The reporter refused. Six Tribune reporters showed up at the meeting, and they were subsequently grilled by the Trib's deputy editor, Bob Wary.

The mood at the Union meeting was hostile. Union staffers had long expected the demise of the Trib, but they never thought it would affect their paper — or their jobs. Herb Klein, Copley Newspapers' editor in chief, and John Curley, the company's general manager, were repeatedly asked how many layoffs there would be. Several "We don't have any answers" later, Curley finally admitted he did have a "rough number, but would be a disservice to reveal it at this time." And just when, exactly, would that number be revealed, one reporter asked — perhaps within the next 30 days? "I'll get back to you on that," Klein responded. Union editor Jerry Warren, who is married to a wealthy La Jolla philanthropist, told reporters, "I'm in the same boat you are." Financial reporter Craig Rose responded, "Why don't we trade paychecks then? And while you're at it, you can have my '82 Impala." Other questions that were asked include "Will people be getting pink slips on Christmas Eve?" "Is the hiring freeze still in effect?" and "Herb, have you made the ultimate decision of whether or not we're going to keep the New York Times crossword puzzle?"

The telemarketing people who sell subscriptions over the phone were issued a "Merger Announcement Script For Customer Inquiries." The "suggested response" to the question Why are you doing this?: "The combined resources this merger allows will bring our readers an even larger, more comprehensive, better newspaper." The first of the five "points to remember": It is a merger."

A Tribune reporter found himself in the same elevator with Herb Klein. He tried to make small talk: "Well, you know how to make an interesting day." Klein merely grunted and said, "It'll work, it'll work."

The 4:00 p.m. wake at the Red Lion began in the Windows Lounge, where 30 or so reporters and editors were seated in a large circle, as though they were in some kind of therapy group. When the 5:00 p.m. news came on, they gathered around the bar and watched themselves being interviewed on the overhead TV. They subsequently relocated to the hotel's Club Max, where there was a $3 all-you-can-eat happy hour buffet — not to mention happy hour prices on drinks. The group eventually grew in size to more than 50; the drinks poured freely. Assistant city editor James Wright spotted Tom Blair and bellowed, "He should be buying drinks — he's still got a job!" The evening ended around 9:00 p.m., with a Trib staffer videotaping managing editor George Dissinger drinking a glass of wine and sashaying among his troops.

At 4:00 p.m. on Thursday, Helen Copley finally appeared in the Tribune newsroom for a closed-door meeting with Neil Morgan. A memo from Copley was subsequently posted on the bulletin boards, announcing that Union managing editor Karin Winner would be heading up the transition team, assisted by Witty, and thanking everyone for how well they accepted the news that the Trib would soon be history.

According to the Tribune's own front-page obituary, average daily circulation, as of March 1991, was a paltry 116,694. But according to the Copley in-house newsletter, Inside Edition, circulation has since plunged even further: In July, the daily average was a mere 112,000. What's more, the newsletter continued, classified advertising lineage has decreased by 12 percent over the last year, from 271,160 inches in July 1990 to 238, 209 inches in July of 1991.

Tony Perry eulogized the Tribune in his front-page Los Angeles Times column the following Friday, praising the paper for practicing "journalism as aggressively and with as little fear or favor as any newspaper I know." He neglected to mention that his wife, Ann Perry, is a Trib reporter.