All the world's a Sneetch 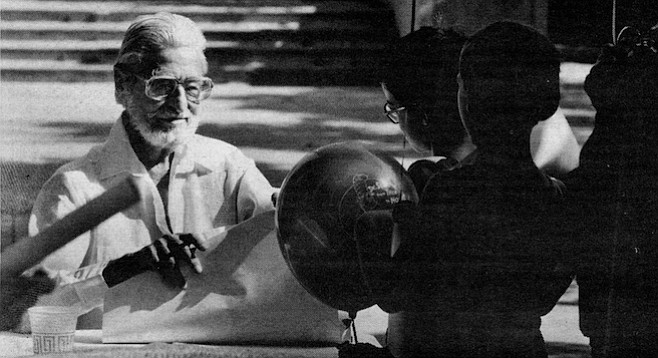 I checked out some Dr. Seuss books from the public library. Maybe it’s just me, but that thick and lurid green ham, with the big three-pronged fork sticking in the top (such gushy fleshiness), those two green eggs positioned equidistant from it on the plate, looks weirdly sexual. When I was a kid it was fascinating and repellent. I asked my mother to make green ham (no eggs, they made me gag) and she refused — “I’d just use food coloring, honey. It wouldn’t change the taste.” This was the beginning of one of life’s big disappointments: learning that pictures in books do not represent reality.

Theodor Seuss Geisel died on a Tuesday evening; by last Thursday the public was overfed with personal reaction stories of newscasters and reporters and five-year-old girls. I found out I wasn’t the only kid who once thought Dr. Seuss was the Cat in the Hat.

The same Seuss anecdotes appeared when he won a special Pulitzer Prize in ’84, each time the traveling art exhibit “Dr. Seuss: From Then to Now” opened in a new city in ’86 and on his increasingly significant birthdays. He had no children of his own; “You have ’em, I’ll amuse them.” He wrote Green Eggs and Ham on a bet with Bennett Cerf. Horton symbolizes the U.S., and the “Who” the elephant hears stands for postwar Japan. On national and local radio and TV broadcasts, snippets of The Cat in the Hat and Horton Hatches the Egg were recited with the fervor of psalms.

The impulse to overanalyze Dr. Seuss books is irresistible. On hearing of Geisel’s death, a friend joked, “Who could forget ‘I do not like green eggs and ham. I do not like them, Sam I Am’? So fundamentally important to my maturation process. He gave me permission to develop my negative consciousness.... The Seuss books laid the groundwork for my own personal phenomenology. I remember in particular Horton Hears a Who advocating respect for minorities within a democracy. It’s almost a Jainist view of respect for all forms of life, visible or invisible.”

It was not so much the simple morals embedded in the stories that stuck with us (except perhaps for KGTV Channel 10’s Herb Cawthome, who last week cited Horton the elephant as an early ethical model). In the past few days, people have told me again and again how annoyed they were by the ending of Green Eggs and Ham. Sam I Am convinces the unnamed, top-hatted protagonist to try the dreaded dish, and he likes it. A clear cop-out. In my house, dinner-table arguments over plates of peas (well-salted with my tears) often referenced green eggs and ham. If a child had written the book, obnoxious Sam I Am and the fox and the other green-egg-and-ham likers would have left the poor guy alone.

More often in the books, however, children triumph. Dr. Seuss’s world is often a frightening, lunatic place, inhabited by vain, power-mad kings or barely controllable Goxes and Yings and Zans. But those wild animal friends, who entertain you but wreak havoc while they do it, are made to put things right in the end. So they stayed alive in your mind, to be called up in fantasy when the real world was out of control.

In a Los Angeles Times editorial last week, Judith Morgan revealed that Thidwick the Moose was her father. Horton the elephant might have been a beneficent world power in Seuss’s mind, but to me, Horton was Mom, faithful and protective.

There are few wisps of childhood memory that summon warm magic like those fat-bodied, hairy-looking fish — One Fish, Two Fish, Red Fish, Blue Fish — on the big yellow book covering my four-year-old lap. This one has a little star. This one has a little car. My grandfather appears on page 7, a big red fish with fierce brows and a broad, menacing smile. He is smacking the little yellow fish — me — away, while the little blue fish — my sister — poses on fins and tail nearby, smiling. My grandfather’s mock attacks caused me a twinge of real fear as his hand swung through the air. Eyes squeezed shut, I’d jerk away squealing, open my eyes a second later to his exaggeratedly contrite expression (eyes wide, mouth an “oh”) as his hand floated slowly to caress my cheek. Why are they sad and glad and bad? I do not know. Go ask your dad.

Before I could read, there was Bartholomew Cubbins and my mother’s warm, sour-milky coffee breath as she hunched around me to read aloud about the oobleck or the 500 hats. I put my face up as close to the open pages as possible, so that the pictures filled my field of vision. Staring at the fine charcoal lines and shadings, I was drawn in, turned the comer made by the left-hand frame of the picture, imagined the twisted, turretted house there, the continuation of the road, the curlicued, sharp-nosed creatures with big bellies.

Dr. Seuss’s appeal was universal; in the ’60s, a generation learned to read with the Seuss Random House I-Can-Read series. In my kindergarten, perhaps first grade, there was a prohibition against reading Dr. Seuss books aloud for reading tests. Too many kids knew them by heart.

On the floor next to me is a copy of Fox in Socks. The cover of the book — red fox wearing blue socks on orange ground — still makes my spine tighten with anxiety. It is a book of tongue-twisters. The type is large, the words are easy but confusingly similar. The manic complications of stacks of chicks on clocks lead poor Knox to complain to the fox, “Please, sir. I don’t like this trick, sir.” It was the first book I remember trying to read aloud.

I did not succeed. I dissolved into tears on page 21. The memory is exact, melded to the picture there of curly blonde Sue balanced on one pink-socked foot, her other in the air, suspended by the needle and thread she has drawn through the toe. Later plot developments, like Luke Luck and the duck licking lakes, make me inexpressibly sad. My mother claims she never forced me to read the book to her, but she remembers my trying to and giving up. “You hated that book,” she says. I guess that’s why the pictures at the end, where Knox stuffs the fox in the bottle of beetles, make me very happy.