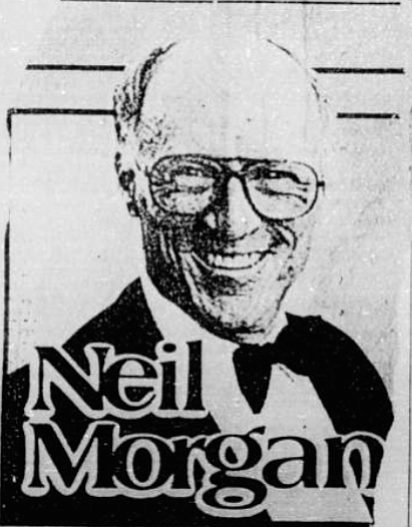 Neil Morgan announced that the marketing consultant had recommended that the Tribune be converted into a morning tabloid.

When Neil Morgan became editor of the Evening Tribune about a decade ago, he vowed to turn the old blue-collar newspaper into an upscale daily catering to the kind of affluent suburban readers who drove Volvo station wagons and went skiing in Aspen. He abolished the word "Evening" form the newly redesigned masthead, added an extra page of trendy comics, and hired his old chum and former Congressman Lionel Van Deerlin, a Democrat, to provide liberal commentary. The editor wrote about each new change in a small box on the front page, personally assuring readers that he was always upgrading the paper with their best interests in mind. As late as last year, he trumpeted that the Saturday edition, always notoriously devoid of editorial content, would feature a Sunday magazine put out by USA Today.

But the new readers Morgan was seeking to attract never materialized. Circulation, which peaked at 130,000 in 1979 before he took over, has plunged to 115,000, in spite of the region's robust population growth. Now, according to sources at the newspaper, the future of the Tribune has passed out of the hands of the venerable editor, who at 67 has devoted most of his professional life to the paper since arriving there to write his "items" column in the late 1940s.

The first public indication of the change came late Friday, when Morgan gathered his staff together to announce that Christine Urban, a newspaper marketing consultant from the Boston area, had recommended that the Tribune be converted into a morning tabloid. The plan would force the Tribune to compete directly with the Copley Press-owned companion, the separately edited San Diego Union. Morgan told a writer for the Los Angeles Times that the tabloid move was "a captivation idea, because of the boldness." One staff member present at the meeting said Morgan seemed "genuinely excited" at the prospect of the unorthodox transition and vowed to remain an editor. "He said he wouldn't miss it for the world."

But according to sources at the papers. Urban's involvement with the Tribune was not Morgan's idea. Instead, she abruptly appeared on the scene several months ago, formed a task force of advisors and other executives from the Union and Tribune, and began looking for ways to boost the lagging fortunes of both papers. Urban's evening tabloid recommendation is reportedly only one of several key operational changes she proposed for the papers. These measures now await final word from "higher-ups" at the Copley Press, presumably including publisher Helen Copley.

Urban, a former marketing professor at the Harvard Business School, is a regular at the newspaper convention, when she berates editors for being too stodgy. Two years ago she said publishers that the kind of changes that have already been implemented by the Tribune, like new graphics, big color photos, and a stick weather map, were only "tinkering at the margins." She urged publishers to begin "rethinking the whole style, the whole presentation."

Although light on specifics, Urban has reportedly argued that readers under 35, who have been deserting many daily papers in distressing numbers, require features like explicit advice columns and youth-oriented investigative reporting. But Tribune staffers complain that Urban's vague suggestions, while popular at conventions, are difficult to define, much less implement. As a result, they worry that Morgan, with his old-fashioned, boosterish approach to newspapering, is being set up for a final fall and may take the Tribune with him. "The morning tabloid idea doesn't make any sense at all. Why would they want to compete with themselves in the morning?" asks one long-time Tribune reporter. "This could finally be the beginning of the end."