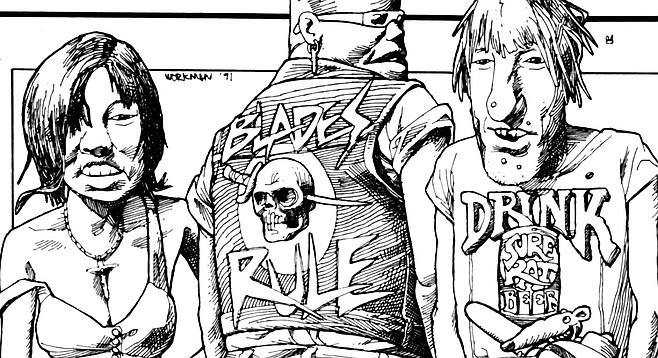 The South Bay Union School District recently proposed — and last Tuesday formalized — a policy banning “dress, apparel, activities, acts, behavior, or manner of grooming” associated with gangs. The San Diego Unified School District is currently developing a similar policy of its own. At least six of the city's high schools, however, already address the gang-regalia issue in their existing dress codes:

Crawford High School, East San Diego: No T-shirts or jackets that advertise beer, alcohol, or drugs or have any vulgar or obscene words. No gang-related clothing such as rags hanging out of pockets or headgear (scarves, bandanas).

Hoover High School, East San Diego: No T-shirts that promote sex, violence, and drugs; T-shirts or other clothes that are sexually suggestive (too tight, too short, too low, or see-through material); clothes that teachers, students, or other staff find offensive because they cause disruption in the classroom; clothes or scarves that are gang-related and incite confrontations; clothing with personalized lettering. “The gangs we focus on are Spanish and Indochinese,” says vice principal Rick Novak. “Typically, they have lettering on the backs of jackets, or on hats, with their street nicknames written in Old English writing. So we don’t allow any clothing with any kind of personalized writing on it, even though it kind of presents us with a problem — kids not affiliated with gangs want to write their names on their jackets, and we have to ask them not to do that.”

Morse High School, Southeast San Diego: No gang colors, halter tops, crop tops, or T-shirts with sexually explicit language or ads for beer or wine or contraband. The gang colors in this case are red — Morse is in the midst of Blood territory — and specific taboos are red shoelaces, red belts, and red athletic wear (such as Cincinnati Reds jackets or jerseys).

Point Loma High School, Point Loma: Of the 1850 students, upwards of 300 are bussed in each day from Barrio Logan and Southeast San Diego. The dress code simply prohibits students from “wearing clothing deemed inappropriate.” Vice principal Joan Auer: “We discourage our kids from wearing red and blue bandanas and football jerseys with numbers on them that signify certain neighborhoods,” Auer says. “For example, a couple of our students were wearing jerseys with the number 1208 on them, and that in some way signifies Logan Heights, so they’re no longer allowed to wear them. And just the other day, a student showed up in all green; our school policeman, who used to be with the San Diego Police Department’s Gang Detail, told us that’s the color for the Lincoln Park Pirus, so we got him some alternative clothing.”

San Diego High School, downtown: No hats or caps worn in class, and no sunglasses unless prescribed for medical purposes. Any “colors” that are worn for any particular gangs are prohibited, as are scarves hanging out of pockets and pegged khaki pants with slits at the ankles. “Determining whether a black Raiders jacket is simply a black Raiders jacket or if there’s enough paraphernalia worn with it to indicate it’s more than a Raiders jacket, you’ve gotta go on a case-by-case basis,” says principal Robert Amparan.

As for the other city high schools, they either make no mention of gang regalia in their dress codes or don’t have dress codes:

Clairemont High School, Clairemont: No dress code. “As long as you can buy the garment in a store, we can’t do anything about it — generally," says athletic director Hal Krupens. “The other day a kid wore a T-shirt to class that said ’Fuck You.’ We called him into the office and asked him if he’d please remove it; he said he didn't have anything else to wear, so we called his parent, and his parent said she wasn’t aware that we had a dress code and that she’d just bought him the shirt the night before as a present. So we asked her if she would please make him turn the T-shirt inside out for the rest of the day, which he did. He never wore it again.”

Patrick Henry High School, San Carlos: No T-shirts with obscene language or advertising alcoholic beverages. Girls’ clothing should be comfortable and simple fashions for daytime wear. Avoid overexposure. “That would be a skirt that’s so short you could see someone’s underwear when they sit down,” says vice principal Mary Gilliland.

La Jolla High School, La Jolla: Footwear is to be worn at all times on campus. Swimming attire or its equivalent is not permissible; neither are dresses or blouses with low necklines or those that are excessively tight, or short shorts.

Lincoln High School, Southeast San Diego: Who knows? “I’d like to be left out of your article; I just got here,” principal Virginia Fbster said before hanging up the phone.