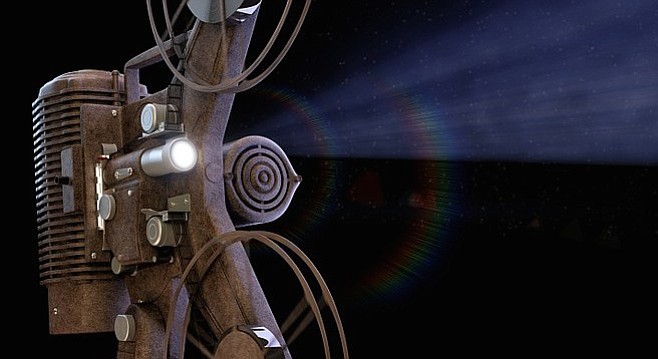 Film festivals over the past several years have come to be recognized, like hospitals per capita or major league sports franchises, as one of the most visible status symbols available to a modern metropolis, or a would-be modern one. With the firmly rooted festivals in San Francisco and New York being emulated left and right by freshly sprouted ones in Chicago, Los Angeles, Dallas, Atlanta, Miami, Philadelphia, Denver, Telluride, Seattle, Portland, Salt Lake City, and who knows where (to limit the list only to those in the United States), it might sensibly be argued that the world now needs another film festival like it needs another nuclear missile base. That, in any event, would doubtless be the disinterested global or celestial view of the situation. At the local level, however, it might just as sensibly be argued mat San Diego, or rather San Diegans, may very well feel the need of a film festival, for purely selfish reasons that happily have nothing whatever to do with civic pride or the enrichment of world culture. Anyway I hope so.

It will not escape notice, I expect, that my very own name is to be found among the directors of the first annual (knock on wood) San Diego International Film Festival, which is due to get underway tomorrow night at Sherwood Hall. I also expect it will not go unasked whether there isn't a conflict of interests in my sitting on both the impresarial and the critical sides of this venture. But a moment's reflection ought to reveal that, so far from conflict, there is of course a beautiful harmony of interests here. In either case I am concerned, in my modest and ineffectual way, with the standards of the movie scene hereabouts. That, truthfully, is more purely the purpose of my festival involvement than it is of my critical endeavors, which are always somewhat contaminated by subsidiary purposes such as protecting me from the need to seek "a real job" and giving vent to my sadomasochistic tendencies. My widespread reputation around town as something of a sourpuss (to select a random euphemism) comes largely, I think, from the low percentage of enthusiastic noises I make as I run through the weekly lineup of first-run movies in town, a list which typically includes the likes of Foul Play, Eyes of Laura Mars, Death on the Nile, Corvette Summer, Hooper, Somebody Killed Her Husband, and Who Is Killing the Great Chefs of Europe? Such a lineup is sufficient cause, I think, to prompt a person either to take up residence elsewhere or to start up a film festival. And I would hope that, without having to perjure myself, the lineup of movies at the film festival will dramatically raise the average of my enthusiasms for the next week or two. We shall see.

I don't mind saying beforehand that the selection of movies at the festival is not what I personally had in mind at the outset. I don’t mind saying so because, in the first place, it will hopefully be a great relief to all those who read this column only with daggers in their eyes to hear that the festival does not represent my own preferences and perversions; nor does it represent any other one person's. I don't mind saying so, in the second place, because knowing what movies we tried to get, how hard we tried to get them, and how well we did within the realm of the possible, I am in no frame of mind now to make apologies and I don't believe any are necessary. The results of our collective efforts are merely somewhat less individualistic and eccentric than I would have liked, but no matter. Nothing sneaked into the lineup that I myself would not be interested in seeing, even if a few things got in that I take no particular pride in showing.

Unlike the prestigious Cannes-London-New York-style film festivals, the San Diego tyro makes no pretense a step ahead of the international film trends; on the contrary, it frankly acknowledges its city's perennial position of being a step or two, or twelve, behind. The selected movies this first year have all had showings one place or another in this country; in the majority of cases they have had regular commercial runs. And with few exceptions (Jeanne Dielman, The F J Holden and probably The Holy Office and The Teacher), it is not utterly inconceivable that they might eventually have turned up in one of the regular San Diego theaters. If and when they would have done so are troublesome questions, however, and one could go blue in the face awaiting an answer. (Oddly enough, San Diego theaters have lately been glutted with festival worthy films: Stevie was shown at the recent Montreal festival, Midnight Express at Toronto, A Wedding at New York, Who Is Killing the Great Chefs of Europe? at Toronto and San Francisco, and Girl Friends at Toronto and Los Angeles.) The primary function of this fledgling festival, then, may be seen as something like a clearance sale —a sudden unloading of items culled from the immense backlog of movies which, for as assortment of reasons and excuses, have not yet made their way to San Diego. These twenty-one movies are like a year's worth of premieres at the Ken or the Guild or the Unicorn crammed into nine hectic days (last chance! limited time only! everything must go!). Of course, a film festival, with its unreasonable demands on a moviegoer's time, stamina, attention span, and retention rate, has never been an ideal way to see movies. But with certain kinds of movies, is there another way?

It would surely be as error to imagine that film festivals call upon a movie lover's passion for movies. Nothing could be more dampening of passion than the day-in-day -out demands of a film festival. Rather, festivals appeal to that quadrant of a movie lover's heart where passion gives way to teeth-gritting performance of duty. What the devoted movie lover needs at festival time is not so much ardor as endurance — a desire not to be mastered or consumed or outdone by his love, but to suffer its demands in a spirit of bitter competition and to take whatever it dishes out.

Naturally, not everyone makes a pretense of being such a fanatical lover of movies; and among the more continent and budget-conscious moviegoers the common question to come up about this festival is, "Well, which of these twenty-one movies should I see?" Inasmuch as this festival leans toward the something-for-everyone principle and has not been knowingly and maliciously designed to conceal a few plum movies amid a lot of meretricious filler, this is not an easy question to answer. It is a question that can best be answered individually. And it can better be answered the better one knows the asker. Because I know myself about as well as I know anybody, I am the least hesitant to single out the movies I myself look forward to with the greatest eagerness and the greatest expectations: Arturo Ripstein’s The Holy Office, because I was an avid admirer of his Castle of Purity when it was shown at the Unicorn two years ago; Walerian Borowczyk's The Beast, because I have been a greater or lesser admirer of all his work, his early animated films as well as his later live-action features, and because the possibility of a genuinely good, or even a merely stomachable, pornographic movie remains a tantalizingly elusive ideal; and Marco Ferreri's The Last Woman, because a couple of cool heads have assured me it is a hot number. I also have a new interest in John Carpenter, whose first movie (Dark Star) I thought sophomoric but whose second movie (Assault on Precinct 13) I thought sensational; I have an older, moldering interest in George A. Romero (Night of the Living Dead), and I have an abiding interest in the horror genre to which both of their festival offerings — Halloween and Martian respectively — belong. I could go on. Since my ulterior motive in sitting in on the festival selection committee was in picking movies I wanted to see myself, there’s not a movie on the list that I, in my unshakable thirst, am not to some degree curious about, apart from those I have seen already.

Of the handful I've seen, the only one I would stick out my neck so far as to call a masterpiece it Claude Sautet's Mado. This, as it happens, is a movie I would more freely recommend to the occasiona sad old-fashioned moviegoer than I would to those whose interests tend to run more au courant. Sautet, essentially a storyteller, doesn't blaze any new trails. He merely takes on and brings off scenes of an emotional complexity and moral ambiguity such as would sorely tax the art of the most skillful and penetrating novelist. To reaffirm, as gloriously at he does, the viability of such moss-grown cornerstones of fiction as character and plot is in its way as remarkable an achievement as any innovation could be.

On the subject of innovations, Chantal Akerman's Jeanne Dielman is, of all the festival movies, the one most imperative to be seen by anyone who fancies himself up to date in movies, and especially in feminist movies. It is a — I hope I don't scare anyone off by saying so — very important movie, even a landmark. Now, I myself could not spot a landmark if it fell on top of me. And I leave the discovery of such things to those observers who belong the same breed of men as Columbus, Balboa, and Magellan. Still, I would agree with Manny Farber and with Patricia Patterson, whose “kitchen Without Kitach” article in Film Comment is required reading (supplementary reading on this subject: Jonathan Rosenbaum in Sight and Sound, and Marsha Kinder in Film Quarterly), that Jeanne Dielman signals a union between the structural, or minimal film and the commercial narrative film. It is not such a neat union, however, that you cannot tell where one type of film leaves off and the other begins. Nor do I think it is a remotely equitable union. In fact, it is perhaps less properly thought of as a union than as a pragmatic appropriation of the latter by the former. As narrative, the movie is unconvincing, overly schematic, prejudged, and ungenerous in its rewards: you are so swallowed up in the special pace and shape of its formalized domestic world that you are satisfied to accept the overcooking of potatoes or the absent minded leaving on of a light switch as a dramatic revelation.