Come Back Miss Muffet Spiders Aren't All That Bad 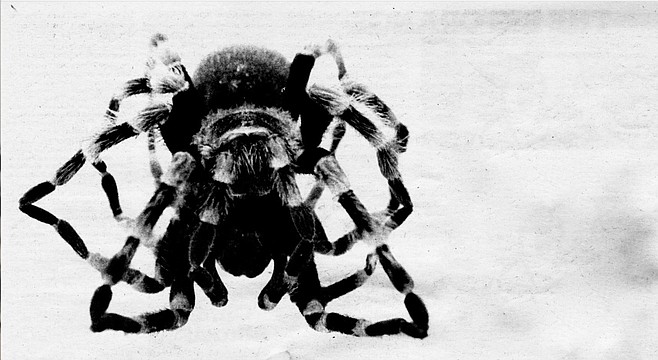 From North Africa to Southern Europe, from South America to Baja California, and across the semi-desert reaches of the Southwestern United States, the Hairy Mygalomorph exercises its eight supple legs. Indigenous to the San Diego area are three varieties of the above-mentioned beast. One may appear in the headlights of an East County motorist, while another pops up in the backyard of a North Park resident. To those among us having keen eyes and lacking certain psychological handicaps — such as an unreasoning fear of large, nasty-looking spiders — they are also available in local canyons. All that's needed is a spade, a long stick, and some type of receptacle for the quarry. Just dig up a few gopher holes and you'll find one, eventually.

But for the less-industrious hunter, one disinclined to grub about abandoned rodent burrows out in the chaparral, a quick trip to the neighborhood pet shop will prove more practical. Many local shops carry them, for the Hairy Mygalomorph has become a hot item, recently increasing in popularity.

“We're selling quite a few of these,” attested Cal Joyner of the Blue Lagoon Pet Shop. “Once we got these South American red-leg tarantulas in stock, they started moving. The local ones are just brown and ugly. These red-legs are more attractive and people react to them more. Set one up in an aquarium — they look really nice crawling around on a branch."

Despite a bad reputation and a gift for making rather negative first impressions, the hefty spiders we call tarantulas have somehow endeared themselves to many San Diego residents. “The demand for them this past year has been much greater than ever before.'' agreed Pam Sharp, owner of the La Pluma Pet Shop. “Usually the South American red-leg is the only type I carry, because the others are so readily available in someone's backyard. Also, they're more docile than the local spiders."

On the subject of these, the largest spiders in the world, there is much confusion and no small amount of fear and loathing. First of all, the spiders Joyner and Sharp were referring to are not, in fact, tarantulas.

“They're selling Hairy Mygalomorphs," explained Dave Faulkner, curator of entomology at the Natural History Museum. “Tarantula is a bad term to use because the word tarantula, in the technical sense, refers to a type of wolf spider. The spiders we have here in the Americas are not true tarantulas, but belong to an altogether different family."

The word in question has its roots in Southern Europe. During the Middle Ages, around the town of Taranto, Italy, the bite of the wolf spider was thought to cause a nervous disorder, which came to be called tarantism. In those days, when any kind of questionable behavior might get a person burned at the stake, one afflicted with said disorder would dance around in a wild, seemingly uncontrolled manner. The subject would run amok, feet kicking and arms flailing the air, until he or she collapsed from exhaustion. The dancing was thought to be a symptom of, as well as the cure for, this unfortunate malady. Today that dance (somewhat more formalized since the Dark Ages) is known as the tarantella. A large body of classical music has grown up around it.

But while the folks in Southern Europe were having a wild time, the innocent wolf spider was getting an undeserved reputation (for biting people) and a bad name: tarantula.

The true tarantula belongs to the Lycosidae family, while the creatures of the Americas — Hairy Mygalomorphs — belong to the Theraphosidae family. The two resemble each other so much, and the differences between them are so subtle and technical, that even an entomologist would be hard-pressed to tell them apart. Small wonder that when European explorers were confronted by large hairy spiders in the Americas, they called them tarantulas. Most people still do, but none of the pet shops in this area carries the original wolf spider with the Italian name.

None of these big spiders, of which there are thirty or more varieties world-wide, should be referred to as insects. They belong to a class of animal called arachnids.

“Spiders, and all other arachnids, differ from insects in many obvious ways," said Faulkner. “They have only two body parts, whereas insects have three: head, thorax, abdomen. Another obvious difference is the number of legs: all tarantulas (to use the general misnomer) and all arachnids have eight legs; insects have six. Except for a few very primitive insects," he continued, “they all have two pairs of wings, which can be variously modified. But arachnids are more primitive; there is no such thing as a flying tarantula. Also, the eyes are quite different: insects have compound eyes; no spider has compound eyes. In fact, tarantulas have the worst eyesight of almost any spider."

There is one other major, though less discernible, difference between the Hairy Mygalomorphs that people are buying in pet shops and the ants in your backyard. It regards the mouth parts: ants, like all insects, have mandibles; tarantulas have fangs.

And they are about as dangerous as your nextdoor neighbor's chihuahua. Less so, in fact.

“You'll never get mauled by a tarantula," said Faulkner. “It’s probably a better pet than a great Dane. I’d much rather be bitten by a spider than a dog."

Moreover, dogs, cats, even parakeets or hamsters, are far more likely than a tarantula to bite the hand that feeds. Its temperament does not match its mean appearance. Quite docile, the tarantula is content to crawl about any surface that presents itself — a hand, a table top, or an aquarium lined with sand.

“I’ve never been bitten — not once," said Cal Joyner, as he handled a red-leg from South America. “I’d pick up any of these spiders without worry. It is a bit irritating to have one crawl on you, though; their coarse hair makes your hands itch."

Dave Faulkner has never been bitten either. He owns a few black tarantulas, of the local type, and handles them frequently and casually. “If you have a tarantula," he said, “and give it time to get used to being handled, it probably won't bite you. Of course, if you deliberately torment it, the thing just may chomp on you."

“Don’t blow on them," advised Joyner. “They really hate that; it both frightens and irritates them. Then they get really excited and start backing around in circles."

If, by some chance, you are bitten by a tarantula, or a Hairy Mygalomorph, fear not. “They have very little venom, if any," said Faulkner. “If you are bitten you can expect just a localized reaction and two fang marks. Their bite is probably less harmful than a bee sting. There are some in South America that are considered deadly, but when I say that. I'm referring to a case where someone had an allergic reaction. Most people will have a reaction, but it won’t be a serious one, just a little red bump, maybe some local swelling."

Tarantulas, which may grow up to six inches in diameter, are different from most other spiders in that they do not spin a conventional web. They have silk, as all spiders do, but do not use it to catch prey. They may line the insides of their burrows, but most of the time the silk is laid down haphazardly. Spiders leave a trail of silk wherever they walk. The tarantula is no exception and sometimes will go on a silk-spinning binge.

“I’ve seen them cover practically half their cage with solid silk," said Sharp, “solid and thick, like a wad of cotton."

When one wants to eat, it crawls forth by night and runs down its meal, or waits for it to come by. “They detect ground vibrations," said Faulkner, “and are probably able to sense other things; they may sense heat; they may sense odors given off by other insects."

Tarantulas, besides being nocturnal, have other habits of interest to potential owners. When feeling a need to defend themselves, or becoming irritated for any reason, the spider will raise its two hind legs and scrape the hair off the top of its abdomen. For this reason many of those seen in pet stores have a bald spot there. “These hairs are easily dislodged," said Faulkner, “and can act as an irritant in the eyes of a lizard, say, or some other enemy."

Unfortunately, when it comes to their own kind, tarantulas are not very sociable. This makes breeding them, or even keeping two in the same aquarium, virtually impossible. This fact seems especially true of the very popular South American red-legs. “We can’t keep them together at all," said Joyner. “If we put two of these guys in the same aquarium they fight."

A ten-gallon aquarium, set up for a desert-type environment with a small water supply, makes an ideal home for these critters. So the local spider (and aquarium) merchants advise. But according to entomologist Faulkner, a five- or even three-gallon cage is quite sufficient. “You can line it with sand or bark," he said. “I just use kitty litter because had it on hand."

The tarantula likes its privacy and prefers to live in a burrow, so a domestic tarantula might appreciate a few rocks in its aquarium to hide under during the daytime. Also, it prefers temperatures in the low seventies, and if one’s house gets much colder than that at night, a small lamp will serve to keep the spider warm and contented. (Caution: don’t cook your pet.)

Though not a picky creature, the tarantula likes to eat crickets, especially Jerusalem crickets. Once it has captured (and crushed) its dinner, it will take a very long time to feed. “What they do," said Faulkner, “is excrete a digestive enzyme, externally digest the cuticle (hard outer layer or shell), and then absorb it. Tarantulas have to take their food in liquid form because they don’t have the mouth parts needed for chewing. All they have are those fangs."

For anyone squeamish about catching crickets and other insects, commercial food is available. Live crickets can be had a thousand at a time, but it’s not really necessary to buy them. Said Faulkner, “You don’t have to worry about feeding these things every single day; feed them whenever you catch something substantial — about once a week would be ideal."

Those bent on establishing a meaningful relationship with some Hairy Mygalomorph should be aware of the long-term responsibilities. Given good care (and barring unfortunate accidents such as the careless use of pesticides), a pet spider may outlive any other domesticated animal. “They live a long time," said Faulkner. “The females can live up to thirty-five years in captivity."