1976 San Diego guide to where to park 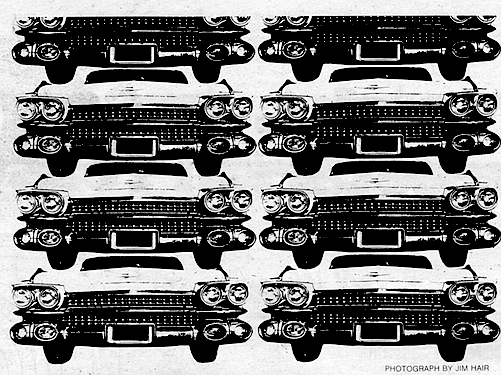 Free parking is available at the three extremes of the downtown area. The most accessible and most popular spaces are located on what some old hands have nicknamed “Tightwad Hill.” This area, loaded with free, all-day spaces, surrounds the El Cortez Hotel on Sixth, Seventh, and Eighth Avenues from Beech to Date Streets. There are more spaces on Second Avenue from Cedar Street north to Grape and on Third Avenue from Beech north again to Grape. But city employees, who start their work day at eight a.m., grab these spaces early and they're seldom vacated before five p.m.

Or you can turn this trick on its tail. Many county and private sector employees come in to work early and leave by four p.m., so there are usually spots on Tightwad Hill and along the streets below Broadway late in the afternoon, especially on Thursday and Friday.

Parking for the County Building on Pacific Highway and Date Street is free for at least two hours. That's more than enough time to hit lower Broadway for errands. The area in the extreme southwest corner of downtown, on Pacific Highway and Harbor Drive, offers some free parking any time of day. Adjoining the Embarcadero construction project, behind the Harbor Drive fish markets, is a huge lot that always has spaces. Spots can also be found along Harbor Drive heading southeast (towards the Coronado Bridge) from the fish markets. This free parking is very close to the downtown core. Walking up Harbor Drive 100 yards from its intersection with Pacific Highway, you will see an All Right parking lot, which is separated from another lot by a gravel road. If you walk down that road, you'll come out on Market and Columbia, three blocks from the new Federal building, and four from Broadway.

There are also free spaces bordering the Electrical Supply Distributing Company at the foot of Second Avenue and by Western Metal and Goodwill Industries at Fifth and Seventh Avenues. That, though, borders on the seamier side of downtown life.

Golden Hill (off B, C, and Broadway from 17th to 20th Avenues) had a lot of empty all-day spaces this summer. It’s great parking for City College students, and will probably be scarcer now. A spot here will put you within walking range of the unemployment office on 12th Avenue. But to the downtown core it’s a hearty 15 to 20 block walk.

There is other parking that’s not free, but worth considering.

First, master the flow of traffic. Downtown, unlike any other part of the city, is a mesh of one-way streets. But they’re not hard to make sense of. The streets running north-south alternate. First, Third, Fifth, and all odd numbered avenues run one-way north. Second, Fourth, and all even numbers run south. The same goes for east and west. Date, Beech, A, C, E, and G Streets all run East, and the streets in between run west, except for Broadway, which is two-way. Once this plan becomes inculcated in your driving behavior, meter-hunting becomes a lot easier.

Persistence is the trick to finding in empty meter in the core of downtown that yields an hour’s parking for a dime instead of settling for the lot across the street that charges 40 cents for a half-hour. Downtown San Diego may be crowded, but it’s no San Francisco or New York. By mastering the oneway streets and avoiding Broadway, you’ll stay clear of stalled traffic. Lunch hours make meter spaces the hardest to find and driving the most hectic. At other times a meter in the core of downtown can usually be spotted within 15 minutes. The area outside the core (below Second and above Eighth Avenues) is less than a five minute walk to the County Court House or the City building, and meters are good for two hours.

Scout around for all-day parking. Don’t pay 40 cents for a half-hour of lot parking when there are lots several blocks away for half the price. Two blocks west of the new Federal building (on India and E Streets) there are spaces for compacts at 40 cents per day, 50 cents for full-sized cars.

Play the odds. Though there are plenty of metermaids on the prowl, meters can often yield more time than face value. Remember, tickets are only two dollars. In the very center of town, you might get nailed with an additional four-dollar ticket after the initial meter violation.

Ace Auto Parks, which runs most of the downtown concessions has a “Park and Shop” service in conjunction with many stores, including Walker-Scott on Fifth and Broadway, Harfield's on Fifth and C, and Camera World on Sixth and C. Just park at any Ace lot and present your coupon after making any purchase for one hour’s free parking. California First Rant-offers 30 minutes of free parking in the basement of its main office on Fifth and B (enter the garage on Sixth) or at the Ace lot between Fourth and Fifth.

If you have a large car or bike rack, some of the free parking that otherwise seems too far away is well within riding distance.

White zones, though legally limited to picking up and dropping off passengers, are often good for errands of ten or Fifteen minutes. But yellow and red zones will get you a ten-buck ticket before you reach the corner.

One downtown parking expert says many people are instituting their own “park and ride” programs. “Look at the intersection of Governor and I-805,” he points out. “Every day there’s a load of cars parked free. The people catch the bus coming down from University City and ride in to downtown.” Following, then, is a list of the Transit Company’s express lines, the last stop they make before heading downtown non-stop, and the duration of the express portion of the route. The buses run frequently (about every 15 minutes from seven until nine a.m. and from two until seven p.m.), and all disembark at Horton Plaza, 4th and Broadway. The ride is 35 cents each way, correct change. Transfers are free. (For times and other transit information, call 239-8161.)

With 31,000 students and 4,000 faculty and staff, free parking at San Diego State University is at a premium. Though the University has 8,000 spaces available in numerous lots spread across the campus, many students skip the $15 semesterly fee and park in surrounding neighborhoods.

For the occasional visitor the University provides metered parking along Campanile Drive and in the main lot adjoining Aztec Center. Visitors should inquire at the parking headquarters on Campanile. If you plan to spend a whole day ai school, be advised that Monday, Wednesday, and Friday present the worst parking problems, especially between nine and five p.m.

Three areas provide the bulk of free parking. The area south of the campus along Montezuma Road from Collingwood to its intersection with El Cajon Boulevard fills up fastest. Montezuma juts off at 55th Street to Baja Drive, Dorothy Drive, and Campanile, but these areas are generally filled by 7:30 a.m. Because of complaints from homeowners, the area is patrolled by metermaids, making curbside and driveway parking a sure ticket or tow-away. The area north of campus along 55th Street onto Remington Road is also popular. Remington runs into Hewlett, College Gardens, and Drover, which gets far enough from campus to require a bike or 20-minute walk to class. Your best bet for on-street parking, according to one expert, is the area east of campus, off of Montezuma Road. This section, including Brockband, Tipton, and Rincon, as well as the streets off La Dorna, supposedly fills up last.

There are many ways to dodge the problem of finding free parking, too. Hitch-hiking to State, especially if your home base is the beach area, is the cheapest transportation since ad man Jack Haberstroh’s Bug Line stopped its daily runs down Interstate 8. Most thumbers gather at the corner of 55th and Montezuma Road or near the on-ramps to 1-8 off of College Avenue. The latter spot is discouraged by campus officials because of practicality (drivers are less willing to stop near a freeway) and legality (tickets can be given to both hitch-hiker and driver). El Cajon Boulevard, both east and west of campus, is also fertile ground. Signs indicating destination help encourage those who might otherwise be wary of stopping.

Bikes are encouraged on campus, and bike racks are provided.

Buses have become a more popular mode of travel to campus and daily riders can save by picking up a monthly $10 Saverpass, good for unlimited use, at Aztec Shops.

The 80 route, based in Mission Beach, travels down Mission Boulevard to Sea World and up Friars Road to campus. If you’re coming from O.B. take the 52 along Bacon Street to the Islandia Hotel where you can catch the 80. In Pacific Beach, hop the 27 on Garnet and transfer to the 80 at Mission and Felspar. The 80 Express, with a last stop in Mission Valley runs every half hour from 6:10 a.m. until 9:50 p.m., and takes 17 minutes to the campus. Coming to State by car, avoid the College Avenue off-ramp at peak morning and afternoon hours by taking the 70th Street exit (coming west) or the Fairmount exit (coming east).

Even at its most crowded the Prospect Street/Girard Avenue area presents little problem to those who frequent it. But if your forays to the small shops and restaurants around McKellar Plaza are infrequent, the abundance of open parking lots may have escaped you.

Herschel Avenue, which runs perpendicular to Prospect, has four large lots that remain unlocked weekend-long. The La Jolla Optical lot at the intersection of the two streets is perfect parking for dinner at the Shanghai, Schnitzelbank, or Alfonso's. Further up Herschel are the large lots run by La Jolla Mortgage Fund, La Jolla Federal, and Security Pacific—all left open on weekends.

The alley between Herschel and Ivanhoe also has parking for the Bentz Building and the gift shops (Anne’s La Jolla Antiques, London Assoc.) across from McKellar Plaza.

California First Bank has a huge lot between Herschel and Girard off Silverado that provides a refuge when all spaces on Girard are occupied. There’s also the San Diego Trust and Savings lot across from the Cove Theatre. A number of unlocked lots dot the alley between Fay and Girard off Kline Street. This alley runs through to Prospect Street.