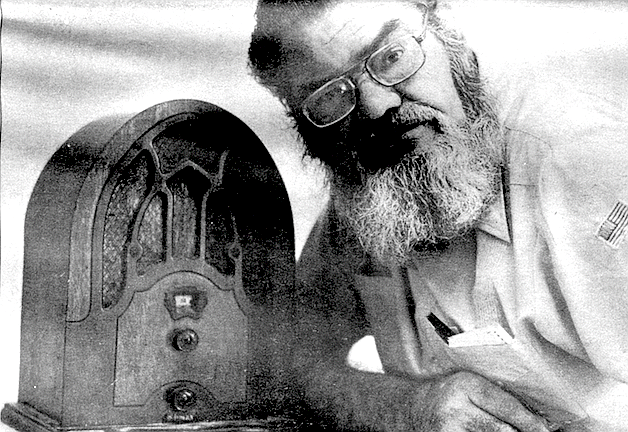 In San Diego and elsewhere, radio, the older brother of the electronic mass media, has been reduced to second-rate status, while the adolescent (television) reigns, and the baby of the family (cable) ascends. The emphasis on personality which dominated radio in the 50s and 60s has declined to the point where most stations now have managerial policies limiting the extent of disc jockey banter. While it is not surprising that drama has packed up and moved to the visual media, it is disturbing to realize that radio has become more of a noise/space filler than an avenue of entertainment.

San Diego radio offers a not atypical example of the complexities of a business where survival is based on a somewhat artificial audience rating. Though the subtleties of audience measurement are beyond the scope of a cursory analysis, the character of each of the competing stations is quite readily ascertainable.

KCBQ is the prototype for the “Q”-radio sound. This format was honed to scientific precision by former KCBQ mogul and rock radio guru Buzz Bennett. From nowhere, KCBQ has dominated the market for the last several years, continuously holding down the Number One slot In the ratings books.

Although its edge may be lessening, the Q is still a power to be reckoned with.

Simply stated, the theoretical basis for the Q-format is the generation of excitement. Disc jockeys are hired as much for their ability to speak faster than a speeding bullet as for their ability to communicate. The current records are limited in the neighborhood of 25, with a primary emphasis on (and therefore a more frequent rotation of) the top six or seven records. Generally, records are not added to the playlist unless they are bona fide hits in other markets or one of the other local stations has had such success with a record that the Q is forced to acknowledge it. The sound is generally referred to in the trade as light, tight, and bright. The popular conception that KCBQ's appeal is solely to teens and sub-teens is mistaken, for there is evidence of a wider demographic spread.

KCBQ has become something of a swinging-door for both air personalities and program directors, but the overall sound has generally been a constant for the listener. Recently hired to restore the good name or at least the good rating is Gerry Peterson, former program director at KHJ in Los Angeles. Peterson toiled several years as a disc jockey, billing himself on at least one occasion as the “Mississippi Hippie.”

Aesthetically, Q-radio occupies the bottom rung on the radio musical hierarchy. It may be referred to as a tasteless combination of hype and repetition. And yet the public apparently laps it up 24 hours a day. If KCBQ's success is evidence of anything, it is that mass appeal is part and parcel of an impersonal aura.

It is significant to note that stations which once competed with KCBQ on its own level have all but abandoned that particular approach. After dropping its Top 40 format, KGB-AM attempted to simulcast a progressive rock sound with its FM station. When that effort proved less than successful, KGB-AM re-instituted its separate identity, concentrating on a soft-rock offering. Dubbed the “mellow” sound, KGB employs a mixture of album and singles product which uniformly excludes the “heavier” stuff. This concept conflicts with the “more beats per second” philosophy which permeates the audio airwaves, but presumably appeals to those whose ears are less than indefatigable.

KDEO has run the gamut from Top 40 to oldies to its current brand of album-oriented rock music. While its sound is obviously formulated, there is apparently sufficient freedom for the air personalities to be creative. Three defectors from the KGB air staff, including programmer Jess Bullet, man the KDEO airwaves. Even though its ratings are somewhat diminutive, the KDEO sound offers a distinct alternative to individuals with the misfortune of owning only an AM radio.

To those within the industry KFMB is typecast as a progressive middle of the road (MOR) station; but realistically, to the listener its sound is not dissimilar to that of any of the aforementioned stations. There is more pressure for a station in KFMB's situation (part of an AM-FM-TV combination) to excel in the various listenership polls. Unfortunately, KFMB is caught in the middle of the field—too hip for the staid older generation, too light for the heavy metal crowd, and too passive for the sub-teens.

KOGO is a traditional MOR station with upper level demographics to complement its nondescript, though inoffensive sound.

While all the stations are required by the FCC to use part of their programming for news. San Diego has just one full-time news station. KSDO.

And if the audience is not exactly burgeoning, country music fans receive a steady diet of pangs and twangs from KSON-AM and its sister station, C-104 (formerly KOZN). Actually, the listeners of this genre are a fairly static group and are not as apt to be button-punchers as are aficionados of contemporary pop or rock stations.

Just a few years ago. FM radio was little more than a training ground for future AM disc jockeys. The stations themselves were shabbily equipped, vastly understaffed, and rarely listened to. Then a funny thing happened to the average listener—he or she discovered stereo. The obviously superior sound (at least from a technical standpoint) and the advent of equipment capable of more sophisticated reception transformed the FM world into a big-bucks phenomenon.

What has accompanied the FM boom is not an altogether rosy picture. The increase of listeners merges quite nicely with the interests of big business, and the result is competition geared at the AM level. Consequently, the complaints that once applied only to AM radio are now applicable as well to FM radio. Sadly gone forever are the days of free-form radio which, when properly produced, made up in spontaneity and inventiveness what it lacked in professionalism and profitability. In the words of Loudon Wainwright. it is an AM world.

San Diego's biggest surprise in recent radio history was the astonishing ascendency in 1975 of KFMB-FM. more commonly known as B-100. On the air only a few months. B-100 moved to the Number Two slot among the FMs, challenging the reign of arch rival KGB. Initially, the musical approach was under the direction of former Q-jock Jimi Fox. who has since departed for the smoggier but more lucrative airwaves of Los Angeles. B-100’s sound is very similar to KCBQ*s but has a more expanded playlist and works closely with local discos.

B-100 appears to be tightening up its race for the Q-listeners with its recent addition of the almost legendary deejay. Shotgun Tom Kelly, a four-year veteran of KCBQ. Kelly is easily the best-known air personality among younger listeners in the San Diego area. His switch from afternoons to mornings is an attempt to increase a perennially soft spot for all FM stations morning drive-time.

KGB-FM registered dramatic gains in the latest ratings to emerge as a verifiable contender. A tremendous promotional campaign including the Homegrown album, a giant fireworks display in March (during the ratings period), and a notorious oversized chicken contributed to its success. KGB-FM has tightened its playlist considerably in the lat two years, resulting in a more predictable sound. Its music, which reflects both national and local trends, is album-oriented rock with a side-helping of singles.

Once the lone progressive voice of San Diego, KPRI-FM has drawn a solid nucleus of listeners to its brand of rock. Initial successes were gained under the tutelage of Mike Harrison, who departed nearly a year ago to concentrate on his radio-journalism career. Harrison's sound was. in his own word, “choreographed.” which may be an understatement of the extent of his control of music and disc jockey style and content. Regardless of the basis of this homogeneous sound. K PR I. despite a poor signal, became an important force in San Diego radio.

Programmer Keith Allen has altered KPRI's philosophy of radio to include a w ider variety of music and greater freedom for his air staff. While KPRI's disc jockeys are low-key, its music is generally up-tempo rock and roll. KPRI offers San Diego an opportunity to experience new album product five nights a week at midnight on “Breaking Point.” Allen's oldies selection is slightly repetitive, but seems to be expanding in range as time moves on. Still, one can describe neither KPRI nor KGB as paragons of progressive rock.

KFSD-FM is San Diego's sole commercial outlet for classical music. At various times during the day. KFSD focuses on a particular composer's music ora certain type of music, which operates as an educational process.

The previously mentioned C-I04. beautiful music, and the bilingual sound make up the balance of San Diego's FM airwaves. North County is privileged to receive several of the Los Angeles FM stations, which expands the choice, if not particularly the aesthetics of radio listening. There is considerable talent on the L.A. AM dial, and the more powerful of those stations are within the range of all of San Diego.

What radio has lost is the occasional audio odyssey which did much more than fill a void. George Carlin once commented that radio offers a person the chance to conjure his or her own image, w hile the visual media take that opportunity away and deprive the individual of one level of experience. The current problem is that the imagined image is only rarely worth exploring.