Inside the Self-Realization Fellowship 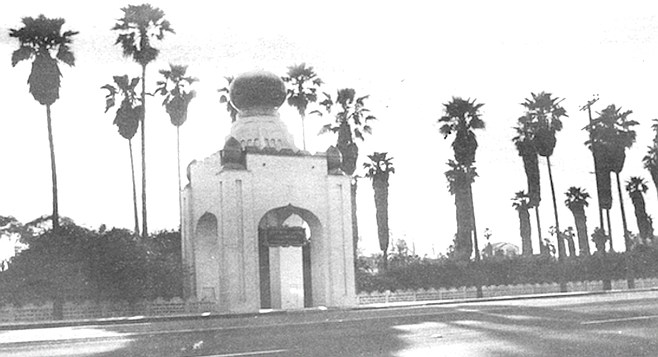 The temple sits on the bluffs at the southern edge of Encinitas, perched beside the ocean and the community like a kind of 25-acre transplant from India, uprooted halfway around the world and dropped here, miraculously, like Aunty Em’s house in The Wizard of Oz. In a way, it’s an uneasy reminder that boundaries, geographical, philosophical, or other-dimensional, aren’t as real as we might imagine.

“It takes thousands of incarnations to perfect our souls."

To the surfers, the Self-Realization Fellowship temple is a landmark. Its glistening white walls and gold, lotus-blossom archway serve as a marker for their playground below—one of the finest point-breaks in California—“Swami’s.”

To the nudist, the SRF is a temple of ogres who ran a full-page ad in a local newspaper last Fall explaining why they are opposed to nude sunbathing on the beach directly below their grounds. (Seems the bodies were distracting weekend meditators.)

To the taxpayers, the SRF is a fellow taxpayer.

To other churches, it’s competition.

And to the tourists who flock to North County beaches, the temple is something to point out to the kids in the backseat so they’ll stop squealing.

Paramahansa Yogananda, founder of the SRF, was a rather remarkable man. He was born in northern India, not far from the Himalayas, in 1893. According to his autobiography, his early life was filled with little more than a desire to take a guru and learn the secrets of yoga. His father was a well-to-do railroad executive, and Yogananda used free passes to ride around on the trains, even as a boy, visiting India’s famous swamis, witnessing miracles, and in a way performing a few minor ones himself. After high school he became devoted to his guru, Sri Yukteswar, for over a decade, learning everything his master had to offer. It was at this time that he was told his mission would be to bring the knowledge of yoga to the Western world, and in 1920 he set out on this mission, establishing the SRF in America, and a sister organization in India. Today there are several Self-Realization Fellowship temples around Southern California, including the headquarters in L.A., and ones in Hollywood, Fullerton, San Diego, and Pacific Palisades. Yogananda himself lived at the estate in Encinitas until his death in 1952.

It seems his death was at least as remarkable as his life. It’s said that he didn’t simply die, like the rest of us are bound to, but in fact consciously exited his body. And it’s said that his body never decayed, but remained in a state of physical immutability. Harry T. Rowe, the mortuary director at Forest Lawn, made the following statement in a letter to the SRF:

“The absence of any visual signs of decay in the dead body of Paramahansa Yogananda offers the most extraordinary case in our experience .... No physical sign of disintegration was visible in his body twenty days after death .... This state of perfect preservation of a body is. as far as we know ... an unparalleled one...."

Twenty-five years after the death of Yogananda. the members of the SRF are still engaged in the teaching of yoga and what they call “self-realization.” They recognize the saints of all religions, and believe there is a strong correlation between the ancient teachings of yoga and original Christianity. It isn’t necessary to attend their services to benefit from their teachings. because mail-order courses in yoga are available for a small fee. Or anyone who wishes to spend a few days in retreat on the temple grounds can rent a room there, if he places his name on a long waiting list. More serious devotees can become monks at one of the temples, with the agreement that they remain at least one year, studying and meditating and working on the grounds.

The actual services of the SRF, held each Sunday morning, are quite unlike those of other churches. First of all, the temple grounds themselves are strikingly beautiful and well-kept by the army of devoted gardeners who are constantly manicuring the lawns and trimming the shrubbery. The style of gardening is definitely Eastern, with palm, olive, and cypress trees, gardenias and irises. And there are little goldfish ponds and brick pathways that lead up to ocean vistas or hidden alcoves where cross-legged meditators sit like flowers waiting to be plucked. The serenity of the place is overwhelming. and really is a little eerie.

The temple is small, clean, not lavish or gaudy inside. There was another, larger temple once, directly on the cliffs, but it was undermined by erosion and fell into the ocean shortly after it was built. Only the old steps are there, leading nowhere. A new temple is planned, they say, but hasn’t been started yet. In the meantime chairs are placed in the garden and throughout the grounds, with sound piped in, so that those who can’t fit into the temple can still hear the message. Pictures of Yogananda and his gurus stare out of everywhere. The pleasing scent of incense floats in and out of the aisles. From somewhere the very faint sound of a metronome can be heard.

The people attending the services could be described as varied. They come very old, dressed formally with caps and shawls to guard against the cold ocean breezes; or youngish, dressed in levis and workshirts. with both male and female ponytails. The only ages that seems to be missing are the very young, who scream underneath the benches of most other churches.

On the day I attended, the message was a very quiet discussion of how religion should not be a philosophical or intellectual game, but a factual, scientific, closely examined confrontation with truth. No shouting or pontification. No threats of Hell and damnation. No boring expostulation on some obscure passage from Ecclesiastes. Just very peaceful. So peaceful that I was surprised at the end when they started passing the plate. It was the only thing I recognized from other churches.

My efforts to gain an interview with the man who delivered the sermon that day were not as pleasing. It took over a month, involving a long process of contacting the SRF public relations agent in L.A., being ignored, then checked out. found (I suppose) to be okay, and then set up for an interview with Brother Premamoy, only to find that he couldn't be there that day. It was another week before the interview could be arranged.

When I finally met with Brother Premamoy, he was dressed not in the familiar ocher robes of the SRF monks, but instead rather nattily in chocolate brown from head to foot – suit, tie, shirt, shoes, socks. He is a middle-aged man who speaks with a European accent. He apologized for the inconvenience of the delayed interview, and said he wasn’t usually isn't inaccessible. He led me through the SRF grounds to Yogananda’s home, a moderately ornate house on the sea bluff, decorated with Indian rugs, tapestries, red tiles, and brass art pieces. He took me to a corner of the living room and asked me to sit where I could look west out one window to the ocean, and south out another to Old Highway 101, while he sat with his back to the southern window, where the sun was shining the brightest. This caused an odd effect in which I couldn’t see his face at all. but could only see a circle of light surrounding his head.

I began by asking him how people become involved with the SRF.

“Happiness, naturally. We have lost an awareness of who we are. where we came from. Without this we cannot be happy. Yogananda showed us, through the scientific technique of yoga, how to regain this awareness. He showed us how to rediscover that we are one with God. that he is within us. This is enlightenment.”

“Could I ask if you have been enlightened?”

"Well, there are something like 27 billion cells in the human body. Only when each cell becomes aware, can we be enlightened.”

“But if our purpose is to gain an awareness of God. and God is within us the whole time . . . that’s simple enough. If it’s that simple, why does it have to be taught? I mean, eating is also very simple, we learn it easily enough when we get hungry."

“Look. I once climbed mountains. I even climbed the Matterhorn. Now if you wanted to come and climb the Matterhorn with me, I would take you, but only on one condition-that you would do exactly as I told you. You see, we need someone who has transcended to teach us the way. We do not say we are the only way. There are many ways to find God, but once you begin one way, you must continue that way. If you started up file Matterhorn and decided halfway that you would try a different route, you would never reach the top. You must decide which way you will take."

I had the uneasy notion that Brother Premamoy was speaking directly to me, and not just answering the questions.

“We tell our members not to proselytize,” he went on. “If people come to us, then we will teach them. We are a very high teaching, beginning where many religions leave off. We may not be for everyone. But at some time you must apply your will to progress. This is why God gave us free-will. Thoughts of will, you see. are things, they cannot be destroyed. This is why we must control our thoughts through yoga.”

“Would you explain the technique of yoga?”

“Why did Yogananda come, of all places, to Southern California?”

“He started first in Boston, but then he later came here. Yogananda felt that California was ready for his teachings. He said that L.A. was the holy city of America.”

“Well, where there is shadow, there must be light,” he shrugged.

“What about Yogananda's death? What does it mean that his body supposedly did not decay?”

“But this is not new," Brother Premamoy seemed to be laughing at my perplexity. “Many saints of the world have experienced many different kinds of miracles. Miracles are not peculiar to swamis.”

“But what does it mean? How can a person be dead and not dead?”

“There are three levels of reality: the physical level, the astral level, or the level of vibrations; and the level of ideas. For a master of yoga, it is not difficult to move from one level to another. We all go to the astral level when we die. Many people call it paradise, but the only true paradise is in the presence of God.”

“Many times. It takes thousands of incarnations to perfect our souls. With the help of Kriya Yoga, this time can be greatly reduced.”

I could see that it was useless to go on asking questions I didn't understand, and getting answers I understood even less.

“I would recommend to you Yogananda’s book. Autobiography of a Yogi." Brother Premamoy offered as advice.

“At any library or bookstore. It is a bestseller. But I will get you a copy.”

He led me to the business office where he snatched a copy of the book, announcing to the saffron-robed secretaries. “I will need this,” and showed me the way to the gate.

As he handed me the book, he shook my hand and said,“I am Brother Premamoy.” For a confused second, I thought the interview was just beginning. I looked at him closely, trying to decide what he meant by announcing his name, hut once again the sun was to his back, and I couldn’t see his face.