In the time of the Monkey King 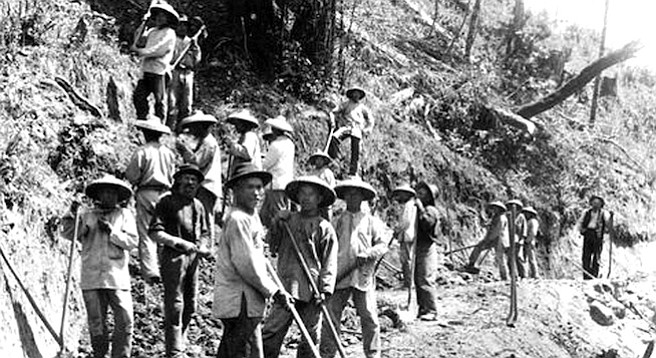 It’s not easy to imagine old Chinatown while sitting in the Nanking Café. Most of the customers are black; they’re just getting something to eat before heading up to the Zebra Club or the Crossroads. The music is black, and you wonder what the little Chinese lady at the cash register thinks as you play with your chicken-fried rice.

Ah Quin came to San Diego in 1879 when he was 31 years old. Most of the Chinese in San Diego at that time had been recruited by the “Five Companies” in southern China and brought here to work on the Santa Fe Railroad from Los Angeles to San Diego and on the tracks from Temecula Canyon to Fallbrook. Because Ah Quin had been formally educated in China and because he spoke English, he was hired by the railroads as a foreman. Ah Quin, along with contemporary Teung Hom, were the first Chinese to go without the Chinese queue and adopt Western dress.

When work on the railroads became scarce, many of the San Diego Chinese turned to fishing. There were eight or ten junks that regularly supplied San Diego with fresh fish. The fishermen also sent abalone and dried fish to China and sea shells to Austria and Hungary for the button industry. Ah Quin opened a general store at Fifth and J, near the water.

In March of 1882, there was an anti-Chinese demonstration at Horton Hall; the San Diego Chamber of Commerce asked stores to close in support of the Chinese Exclusion Act. The Chinese population dropped in San Diego from 1000 to 300 by the end of the year, and the Chinese fishing industry was destroyed, since the newly passed Exclusion Act kept the Chinese from going outside territorial limits.

Many of these Chinese who remained in the late 19th Century turned to servicing the white population. They opened laundries and restaurants, and some started small farms in Mission Valley. Some went into the produce business. And some went into the “entertainment” business.

San Diego health officials complained about the Chinese laundries because the launderers reportedly threw out tubs of water on the street and created stagnant puddles. The health officials also deplored the practice of dampening clothes before ironing by getting a mouthful of water and spraying a shirt through the two front teeth.

In 1888 Ah Quin moved his store and home (and place of gambling) over to 455 Third Avenue. Gambling houses and opium dens opened up all along Island and J, between Second and Sixth Avenues, adjacent to and sometimes including the red-light Stingaree district.

“They’d give you a brush and you’d mark out ten characters of a Chinese poem. At night they’d have a drawing. If all of yours were chosen, the prize was about $2000.”

One of the first Chinese to marry, Ah Quin, and his wife from San Francisco, Sue Leoung, established a family of 12 children. When he died in 1914, he was reputed to be the richest Chinese in Southern California.

One of Ah Quin’s sons, Tom Quin, opened the Nanking Restaurant on Fifth and Island (kitty-cornered from Ah Quin’s daughter’s Chinese-American Market). Tom Quin, who also became known as the Mayor of Chinatown and the “Money King,” ran one of the main gambling houses and exerted unusually strong influence on local political officials. He was a heavy contributor to the campaigns for San Diego City Council members, and local councilmembers were deferential to him. Unofficial meetings involving councilmembers often took place at the Nanking, and when questioned, councilmen explained that Quin’s cook prepared “excellent Chinese food.”

In 1934 there was an anti-corruption clean sweep of city government, and in 1935 Quin was arrested in a surprise gambling raid by then–district attorney Thomas Whelan.

The Chinese Social Service Center, just across the street from where Ah Quin’s home stood, now receives money from the United Fund and the federal government’s Revenue Sharing programs. The center shares space at 428 Third with the Chinese Benevolent Association. The house used to be the head- quarters for the Gee Goon tong, which was organized to help plot Sun Yat Sen’s revolution in 1912.

The lady who is now director of the Social Service Center, Mrs. Kathy Tsung, is not a long-time resident herself. She migrated to the U.S. in the late 1940s.

“Fifty years ago there used to be a Chinatown here,” she pours a cup of Chinese tea in a Styrofoam cup.“Used to be 700 Chinese living here. Now about 200, though there are 3000 to 4000 living in San Diego County. The Woo Chee Chong grocery store, it was here. Now it moved up to 16th Street. The Gin Wing Co., an herb shop up the street,” she points up the street from the balcony over- looking Third Avenue,“the husband and wife passed away. The son, who used to own Chinaland, he moved to Spring Valley...There’s the Bin Kong Tong, an association of Chinese, on the corner.” She points to a row of tiny yellow houses on Third and Island. “There’s Ying On, used to be a merchant’s association up the street; now it’s a drop-in center for elderly Chinese.”

Determined to help me find someone who has grown up in San Diego, Mrs. Tsung tries to collar one of the Chinese elderly who drop in on the Social Service Center itself. She tries to get the old man in the back of the room to talk to us, but he is too shy. Finally, we are introduced to him, a Mr. Hom. No, he’s not Tom Hom’s father. As it turns out, just as San Francisco is full of Mr. Lees, San Diego is full of Homs. Most of the Chinese who came here during the big migration periods came from one of four villages outside of Canton, and the Homs were the leading family in the migration. This Mr. Hom says he came “on a ship from Formosa” that took 31 days. He worked in a laundry, he worked in a restaurant, he was a truck driver for a produce company, and now he owns “a lotta restaurants,” including the Chinese Tea Gar- dens in Clairemont Mesa. Though pretty reticent to talk, Mr. Hom attributes the flight of second-generation Chinese to suburban San Diego after World War II to the automobile. “After war, family got car. One family got two or three cars.”

Though Mrs. Tsung claims that there’s a resurgence of interest in China by 2nd- and 3rd-generation Chinese (“My two daughters come home from college and want to eat Chinese food and speak Chinese”), a young secretary at the center doesn’t completely confirm this. “Yeah, I grew up in Salt Lake City and moved here about a year and a half ago. My dad had operated a restaurant in the mining area near Park City. I’d never move downtown here, though; it’s too dangerous at night. I live in Mission Beach.”

Most of the Chinese here before World War II, and especially during the 19th Century, were single men. Occasionally, as in the case of Ah Quin, a Chinese could find a wife. And more and more, Chinese men would make a visit to China to find a wife. But most of the Chinese women here during the early period were special cases. One of the cases was a girl bought in San Francisco for $500 and brought here for the popular prostitution business. A young Chinese laundryman named Ah Che, who was employed at the Horton House, absconded with her and they were married in 1872. A group of friendly white citizens helped put them on a steamer out of town. But the girl was captured and murdered by the owner and his friends in San Francisco three months later.

Another young woman, an employee at department store-founder George P. Marston’s house, was taken away by Los Angeles police because she had been used as security on a loan by her owner. The San Diego populace, spurred on by the local press, expressed its outrage at the act. A local judge later ordered her returned, and the town celebrated the decision.

Tom Hom is probably the most well known of all Chinese in San Diego. His family owns the Far East Trading Co. on Fifth at E, the David Produce Company, and Woo Chee Chong, the city’s largest oriental grocery. He has served on the city council (where he was one of those indicted in the Yellow Cab scandal) and was Republican assembly- man from Southeast San Diego until defeated by Democrat Peter Chacon. Hom is now the leader of the Gaslamp Association, a group of merchants along Fourth and Fifth below Broadway who want to restore their area in a turn- of-the-century flavor.

Hom is a good example of what happened to old Chinatown. He went to Lincoln and Sherman Elementary Schools, Memorial San Diego High School. He attended “Chinese school” for three hours each day after school hours but stopped going after three or four years.“My parents made us go, but we hated it. It was really strict, and it was tough after being in school all day.”

Hom’s family moved away from Chinatown to 16th and K, but their social activities continue to revolve around the Chinese Community Church, a Christian church founded by the Presbyterians. Hom met his wife there. She had moved here from Hawaii.“Even the newer immigrants, even though they’re dispersed around town, look to the Chinese Church (now moved from Chinatown to 47th and Federal) for social activities. Even those that aren’t Christian.”

The Horton Redevelopment looks to be a little sluggish because of the sluggish economy and hence the Gaslamp restoration may be longer in coming than originally planned. But Hom, as he looks from his real estate office in North Park, is optimistic about reviving Chinatown. With restaurants, stores with Chi- nese goods and foodstuffs, and so on. And he sees the same sort of technique that the Horton developers use (tax increments, eminent domain), as being the way to bring back an era gone by.