The Ken, the Strand, the Academy, the Fine Arts, The Unicorn, and Cinema Leo 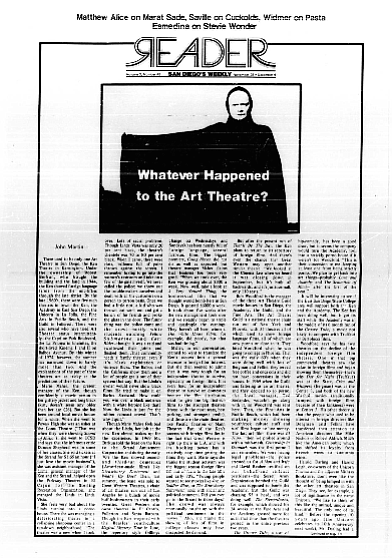 There used to be only one art theatre in San Diego, the Ken Theatre in Kensington. Under the ownership of Robert Berkun, who bought the building and the land in 1944, the Ken showed foreign language films from the mid-fifties through the late sixties. By the late 1960s, there were five such theatres in town — the Ken, the Academy in East San Diego, the Unicorn in La Jolla, the Fine Arts in Pacific Beach, and the Guild in Hillcrest. There were also several who have tried Art Theatre status intermittently — the Capri on Park Boulevard, the La Paloma in Encinitas, the short-lived Kenima I and II on Balboa Avenue. But this winter of 1974, however, the number has narrowed down to barely two. And the explanations of the past of these theatres are as tricky as the predictions of their future.

Marie Maher, the present manager of the Ken, though confidently a movie person in her glittery jacket and long black skirt, doesn't seem any older than her age (26). But she has been around local movie houses for awhile. When she went to Poway High she was an usher at the Loma Theatre ("That was when they were showing Sound of Music); she went to UCSD and says that the infamous critic Duncan Shepherd was in some of her classes. She sold tickets at the Strand for $1.65 an hour ("I just love the movie business"), she was assistant manager of the Loma, general manager of the Ken and the Strand, helped open the Parkway Theatres in El Cajon for the Sterling Recreation Organization, and managed the Linda in Linda Vista.

She feels very bad about the Linda turning into a porno house. There she was managing a deteriorating theatre in a collapsing shopping center in a rundown neighborhood. "The theatre was a new when I took over. Lots of racial problems. Though Linda Vista was only 20 percent black, the theatre's clientele was 70 to 80 percent black. When I came, there were riots, balloons full of paint thrown against the screen. I remember having to go into the women's restroom and take on a few of the girls myself. We never called the police; we threw out the troublemakers ourselves and dealt with all the customers on a person to person basis. once we had a little riot; a kid who was thrown out went out and got a bunch of friends and broke the glass in the door. The funny thing was the police came and the crowd — mostly white students watching Yellow Submarine and Easy Rider — thought it was a raid and swallowed their joints and flushed them.... That community needs a family theatre, even if it's black exploitation or violence flicks. The Balboa and the California show them and a lot of people get it out of their system that way. But the Linda's owner would never show black films. He tried to make it on Barbra Streisand. How could you win over a black audience with a white heroine like that? Now the Linda is just for the rubber raincoat crowd. That's why I quit."

Though Marie Maher feels bad about the Linda, her job at the new Ken almost makes up for the experience. In 1969 Mr. Berkun sold the lease on the Ken to the Strand Amusement Corporation and during the early '70s the Ken showed second- and third-run domestics (American-made films) like Strawberry Statement and What's Up Doc? Then, last summer, the lease was sold to Great Western Theatres, a chain of art theatres run out of Los Angeles by a bunch of movie buff-businessmen in their early twenties. Great Western also owns theatres in El Centro, Fullerton, and Santa Barbara. Though the Ken re-opened with the Beatles' youth-culture Magical Mystery Tour in June, the repertory style (billings change on Wednesdays and Sundays) has been mostly full of foreign language, several first-run, films. The biggest premiere, Going Places, did not do as well as expected, but theatre manager Maher claims that business has been very good. "When we took over, the Ken was grossing about $300 a week. Now, well, take a look at A Very Natural Thing, the homosexual film that we thought would bomb here in San Diego. It grossed $6000 a week. It took about five weeks after the new management took over and we steadily began to triple and quadruple the earnings. They haven't all been winners. The White House Films, for example, did poorly, but that was bad timing."

Maher, in our conversation, seemed to want to translate the Ken's success into a general increase in foreign film interest. But she then seemed to admit that it was very tough for an independent theatre to survive, especially on foreign films. It is even hard for an independent theatre to survive on domestics because the film distributors want to give the big first-run films to the strongest theatres (those with the most seats, best parking, and strongest credit), and those are the chain theatres, like Pacific Theatres or Mann Theatres. Part of the Ken's success with foreign films likes in the fact that Great Western is right up there in L.S. and with its booking power has a relatively easy time getting the films they want. Marie says she thinks the student activism was the biggest reason foreign films fell out of favor in the late '60s and early '70s. "Young people wanted to see moves like Joe, or Soldier Blue, or The Strawberry Statement, ones with social and political comment. Did you ever go to the Strand in those days? The crowd was always emotionally caught up with the political sentiments in the movies." Also, she thinks the showing of lots of films in college classes may have dissipated the demand.

But after the present run of That'll Be the Day, the Ken plans to return to its repertory of foreign films. And there's even the chance that Great Western may open another similar theatre. "We looked at the Cinema Leo when we heard it was closing down in September, but it's built all backwards, and it's just too small, only 110 seats."

It will be interesting to see if the East San Diego/State College area will support both the Ken and the academy. The Ken has been doing well, but it got its start while the academy was in the middle of its six-month run of the Groove Tube, a movie not likely to compete with Truffaut or Bertolucci films.

Woodford says he has two theories on the decline of the independent foreign film theatre. One is that big commercial theatres saw the value in foreign films and began showing them themselves — that's why Day for Night (Truffaut) was at the State, Cries and Whispers (Bergman) was at the Center 3, and both of the new Warhol movies (traditionally lumped with foreign films because of their kinkiness were at Center 3. His other theory is that the people who used to be interested in foreign directors like Mike Nichols or Robert Aldrich. Much like the American public which has shifted its loyalty from French wines to California wines.

Harold Darling and Harold Leigh, co-owners of the Unicorn Cinema and the adjacent Mithras Bookstore, don't even like the thought of being lumped in with the other art theatres in San Diego. They see, for example, a lot of significance in the name Unicorn. "We like to think of this like the animal, unique and beautiful. The only one of its kind." Before the opening 10 years ago (the Unicorn celebrates its 10th anniversary next week), Mr. Darling had a bookstore on College Avenue and for a short time operated a small movie house called the Shadowbox on University avenue (the city closed the Shadowbox down because it didn't meet fire code standards). Mr. Leigh operated a projection service. Both were prime movers in the Classics Cinema Guild, a society which showed art movies at Roosevelt Junior High and at the Strand from the mid-fifties until the opening of the Unicorn in 1964.

The Unicorn sees itself as the art cinema in town because it is willing to show commercially unsuccessful movies. "We show the most first-run movies of any theatre in town." Leigh says, thumbing through a binder full of programs. "Valerie and Her Week of Wonders, The Mother and the Whore, Playtime, Uncle Vanya — all premieres." Leigh claims that the other art theatres are more exploitative. "If the foreign language films don't succeed, they'll turn to pornography, anything to make money." The most successful films of the year, interestingly enough, were last week's program with Behind the Scenes with the Royal Ballet and I am a Dancer with Rudolf Nureyev. Some of the worst financially, were The First CIrcle, based on Solzhenitayn's book, and The New Land, the sequel to The Emigrants.

The explanations for the decline of foreign film interest put forth by Harold Darling are thought-provoking. One of the theories is sex. "Many people, especially young people, used to follow foreign films with the hope of seeing something they wouldn't see in the American films. Almost always they were disappointed. But because foreign films weren't as tightly restricted, in some cases, there was a toilet maybe or maybe something slightly risque like Blue Angel. But almost always the hope was disappointed. Now with the increased amount of sex in American films...."

The other theory is based on the formerly prevalent feeling that to be intellectual one had to see foreign films. "People used to pack the Ken, for example, to see the Samurai films, and even some really awful German films. In the late '60s this feeling eroded. As Tom Wolfe says often, the intellectuals no longer feel confident. They look back on the middle classes for inspiration. It used to be that to be an intellectual you drank French wine and read the New Yorker. Now intellectuals go to Rolling Stones concerts. In my day, intellectuals would've thought that was juvenile. You used to drop in conversation something about the latest Bengali film you saw; now you drop the fact that you want to see Airport."

"You might say this tendency on the part of intellectuals is part of the final homogenization. With mass communication, everyone thinks the same things, watches the same programs and ads on television, goes to the same movies. People don't want to mention the strange animated Bulgarian film they just saw."

According to the two owners, foreign film interest fell for the Unicorn in 1970, '71, and '72. But now interest is back on the rise. But it's hard to explain how any film succeeds. "It's just a certain electricity — a very difficult thing to explain."

Nevertheless, the fact that the Unicorn owners try so hard — with the intermission slideshows, the elaborate programs mailed of the Unicorn membership lists — gives their explanations about the state of art theatres in San Diego have a lot of plausibility.