I didn't chew my rice enough 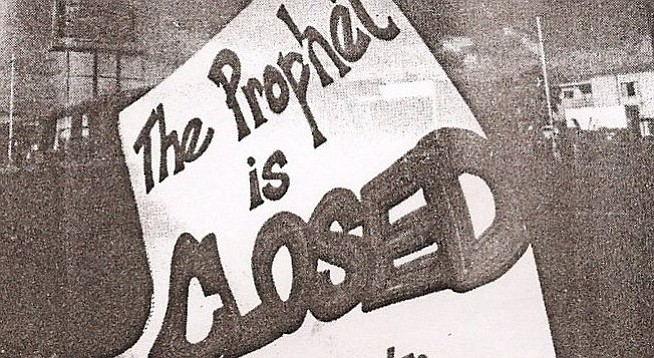 I have never liked restaurant vegetarian cooking. As a friend of mine has said. “Some of the best things in ‘normal’ cooking are meatless — like cheese souffles — and they are never served in these places that have ‘wholesome’ stuff only.'' I tried to explain to him that meatless and vegetarian cooking are different — uh — concepts (“Why no tomato eggplant?" “Too much yin or yang ...") but I basically agree with my friend.

I don’t mean to be condescending. for I take regimens of healthy eating very seriously, but there has been, in the vegetarian restaurants I’ve tried, a pretension to righteousness that makes the carrot cake — no matter how good — sog in my throat. But many people I know and like have recommended The Prophet, on University Avenue; it seems to have a subculture following of many different San Diego people, and since recommendations of good eating are few. I thought I'd try it. The comments about the restaurant were, as I remember them: “amazingly successful eclectic decoration — primary folk art"; "good vibes — you haven't been there?"; "the cook is fabulous — the dishes are really artful, it’s amazing what they do with vegetables"; “my artichoke was cold." There were others I don’t remember, about the communal pleasure of watching the idea of The Prophet take form with the work of a woman and her friends, about the clouds painted on the ceiling, and about the pun available in its name.

I will add my comments for what they’re worth, but before I do. I should note two things: 1) I know little about the different kinds of vegetarian cooking, and 2) As I sat down to write this review, the voice of Truth, personified in a woman I know, told me not to lie: “I’ve never read an honest restaurant review in San Diego (she said). If you have experience you should be able to tell ‘the place means well, but the food stinks’; the Kitchen is the King of a restaurant, you know. I would write reviews, but I hate food, and that wouldn’t do, would it? I like to drink though." At which point she suggested that I begin the review with a conversation between a bean sprout and a Brussels sprout sitting in a refrigerator, waiting to be made into dishes yet unknown.

Next door to The Prophet is a room set up for meditation, with an enormous red rug, an altar, and some Goodwill overstuffed chairs. This room was empty, but the restaurant itself was in full bustle, a large rectangular room with a high ceiling painted light blue and streaked with wispy cirrus — not neoclassically cumulus — clouds. It was not hung with imitation Persian rugs or tatty tapestry; it was rather bare, and so the noise reverberated and the clatter was at times uncomfortable but also reminiscent of “activity" of people actively talking, eating, enjoying. The menu called The Prophet “A Restaurant And Cultural Center" (“Yoghurt Culture" comes to mind), and the culture could be described by some of the contents of a set of shelves in the room: Prof. Arnold Ehret’s Mucousless Diet Healing System (book), a mechanical canary, 6 pair of comfortable-looking sandals, I assume for sale. And It Is Divine (magazine), and Sadvipra. which is a "Journal of Social and Spiritual Progress." There are two pieces of juxtaposable sculpture: one a plaster white near-Eastern figure, and the other a classical pitcher-holding woman integrated into an actively gurgling fountain, the basin of which contained pennies and dimes.

The waiting people — and especially the friendly and interested woman who took care of seating and general organization the night we were there — were fine and helpful. They were dressed, however, in dreadfully offensive white “purity” costumes. The menu was large and divided into categories; sandwiches, dinners (which are announced each evening), appetizers, juices and shakes, desserts, other things, and we ordered largely, to see what it was all like. We had an appetizer of hummus (which, if I remember correctly, is a paste made of garbanzo beans and spices) on pita (Syrian bread) which was not particularly well-prepared but O.K. I asked for a dinner of stuffed mushrooms, and was served a visually beautiful dish of dark circlets sitting in white glistening sauce, out of which bean sprouts grew like hair. This came with good brown rice and a sweet golden yam. It was, at best, erotic. The while sauce, however, was sweetish and slightly sickening to me and did not enhance the fresh herbs of the gluey mushroom stuffing. It was apparent with this and with other dishes at our table that there was real concern about the appearance of the food — the textures, the colors, the confluent smells — and this is satisfying, but the tastes and temperatures were not so carefully considered. All the parts of my assortment were at the same tepid temperature, and I felt like I was eating an extremely exotic T.V. dinner. A plate of “slightly steamed” vegetables was fatally overcooked and lukewarm. The sandwiches we tried were good — a little heavy handed sometimes, but good — and the soup was rich and tasty. The small rolls (beet-bread?) served with the meals were excellent, and for dessert there was an absurdly rich flavorful cheesecake, which contrasted perfectly with the dry predictable carrot cake. The shakes were thick and tasted well of that self-declaring "l-am-freshness" which to me always typified the food and attitude of such restaurants. I felt less than fresh upon leaving; someone mentioned that perhaps I didn’t chew my rice enough, and she was probably right.

Attached is a picture of the Prophet restaurant business card I kept from the 1970s. The decor of this establishment was amazing. Pictures of all the great mystics and saints adorned the walls, along with numerous plants. It was an "experience" just to enter this place...

Business card from the Prophet restaurant, circa 1970s. by sandiegosunriser

Loved that place, I used to eat there when I was a teenager. They had really good Carob milkshakes, decent food and friendly staff.