A right to sing the blues 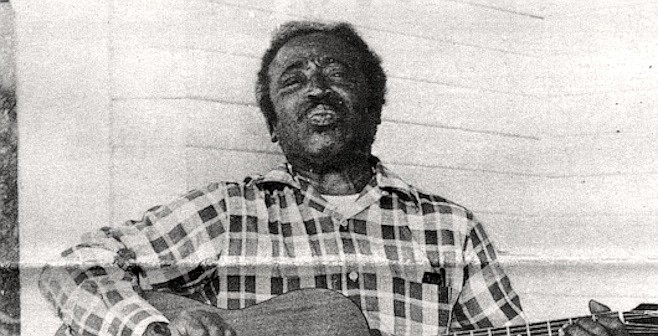 National City--Z Street is a dead end street. And at the end of it is Tom Shaw’s house. It is a rambling, mismatched two-story structure, white paint peeling off the bottom half, a layer of pink stucco above that, and two elaborate Doric columns framing the formal entrance. A rickety white picket fence surrounds the dusty front yard, a ’55 gold Cadillac with a black dog asleep on its hood is parked on the dirt out front. The door of the house is open, and I follow the sound of an amplified guitar to the second story. There, seated on a rose couch, backlit against bright windows so that at first I cannot see his face, an elderly black man is bent slightly over his guitar, and he does not know I am there.

I had a dream last night

I never dreamt before

I dreamt I saw Mr. Nixon

Standin’ in the welfare store

The singer is the Reverend Thomas Shaw, whose career as a traditional country bluesman has officially begun in the last two years. He plays often at Folk Arts, where owner Lou Curtiss is his manager: he went on a European tour, and he has played with Muddy Waters at the Hollywood Bowl. Born in Texas—the name of his first album—Shaw learned his blues, as a teenager, from the legendary Blind Lemon Jefferson, and battled such blues greats as Howlin Wolf and Ramblin’ Thomas to standstills in guitar contests in Texas and Oklahoma, back in the ’20’s.

After moving to San Diego in 1930, Shaw got into the wrecking business — which he had just sold — and played his music in gospel churches. He became Reverend Shaw of Noah’s Temple of the Apostolic Faith, which met in the lower half of his house for many years and has only moved out in the last month, due to a dispute between Shaw and the Church’s Bishop. Shaw tells me he is helping to start a new Apostolic Church in nearby Encanto.

He wants to play a few cuts from his album for me. He likes the volume turned up loud, but he also feels like talking — so we sit, not six feet from each other, yelling over the music.

“You can’t remember these songs,” Shaw shouts. “This is the root of blues, up from slavery days.”

“I could’ve added in some stuff, like B.B. King,” he continues to yell, “but I’m glad I didn’t. The root of blues is back, it’s what people want to hear, it’s come to stay.”

Shaw learned skill from Blind Lemon Jefferson, but he explains that his music was instilled in him earlier than that. “My daddy was a preacher and a composer, and he’d sing to me while I sat in his lap. I paid him no heed, but after he died his songs came to me overnight.” “It was a gift God gave to me,” he continues. “And they’re still comin’. Why, just the other night, I woke up and I said, ‘that’s a song my daddy used to sing’.” He recites:

God moves on the water

And the people have to run and pray

He send the rain and the water

He swept Corpus Christi away

God moves on the water

Shaw leads me outside to a small cottage adjacent to his house. He tells me the huge pepper tree in front of it is 150 years old, the house itself nearly that old. It is vacant now since its last tenant, an old woman who had lived there for 50 years, died in it, but what it does house are Shaw’s mementoes of recent performances, and his dreams of the bigger and better to come. Its walls are covered with posters of his European tour, many of them duplicates, postcards from Europe, photographs of him and his 16-girl chorus in Noah’s Temple. He talks about the tour, about the cars in which he was chauffeured, the planes, the plush hotels. From Z Street and wrecking trucks to the high-powered, moneyed high way of celebrity life. And then back to Z Street.

Shaw calls my attention to an elaborately lettered certificate: it expresses appreciation for his participating in The Folk Musicians Series, presented at the six campuses of the University of California.

“I’ll frame that,” says Shaw. “At least, then, whatever happens, I’ll have that.”

He appears to me a man in limbo, incessantly worried that his glimpse of a glittering, big-time world will turn out to have been no more than that, a taunting glimpse. He keeps fluctuating nervously back and forth in a cramped, close space, at one moment anticipating record sales and another tour, then ruefully surmising that a cruel fate swept his big chance away many long years ago.

“I was good—I’d have made as much money as James Brown,” he declares. “But what happened, I was supposed to record with Howlin’ Wolf in Chicago. Wolf killed a guy over a woman, he was sentenced to the penitentiary for 25 years. That knocked out my record chances, back in 1930.”

He begins to reminisce about those days, and his first wife, who was “4/5 Cherokee Injun, 1/5 Choctaw”. “She was a pretty thing, black hair down to her knees, but too jealous for me. So one day, we were all travellin’ through Texas, her brother and his wife too, and I said I had to stop over for the night and see my family.”

“Well,” he continues, “she started to cry and cry, and her brother says to her, 'Honey, don’t cry, Brother be down in the mornin’.”

You know the more you cry baby

The further I’m goin away

I ask Shaw about the guitar contests in which he was never beaten, and he tells me this story.

“Howlin’ Wolf bet a guy $150 he could beat him, and he was losin’ bad. Now I’d been out huntin' jack rabbits for stew, and I’d just laid these two rabbits down on the porch when the lady whose house it was comes out and says, ‘Mr. Shaw, Mr. Wolf—his real name was J.T. ‘Funny Papa’ Smith — ‘Mr. Wolf wants you. He’s playin' against a boy named High Pocket, and he wants you to pose as his baby brother, and if you win his money back, he’ll give you $50.’

“Well, $50 wasn’t no hay. So these boys he sent drove me to where the contest was in Frederick, Oklahoma. It was so crowded you couldn’t get a car through the street. A policeman came, said ‘You’re gonna have to go down to the colored part of town where nobody will interfere with you.’ ” Shaw repeats this, but his face and tone are unchanging.

“There was' a fast life woman there with a brand new Studebaker, and she looked at me and said ‘Son you're just the right age for me. I'll just raise you for my own self. So they set me up on the front car and we played for about three hours, first one and then the other. The judge was Texas Alexander, an old blues man, he made the record ‘Don’t The Moon Look Pretty Shinin’ Down Through The Trees’.”

“Well, finally. High Pocket says, ‘I’m goin’ to mess this boy up.’ And he played Blind Lemon Jefferson’s song, ‘Matchbox Blues’. He didn’t know that I learned under Blind Lemon. And he didn’t even play it in the key that Blind Lemon played it in. So I won it back for Howlin’ Wolf.

“That was just the night before Wolf killed the man,” Shaw continues. “You see he and Hicks were courtin' the same woman. Wolf was puttin’ all the money in, fine clothes and all that, and Hicks was her sweet boy. So that night. Wolf decided to find out just who she wanted. He said 'You want me, or you want Hicks, you gotta decide.’ But she fooled him. She said, ‘I’m sorry, after you been givin’ me all these fine things, supportin’ me, but I love Hicks.’ ”

“Well, Wolf came through the house cryin’ and he said ‘Brother, I rather be dead.’ ”

“‘You rather be dead on account of a woman?’ I said” Shaw looks sidewise at me, then amends slightly. “She was a very nice-lookin' woman, but I wouldn’t a loved her enough to kill a man for her.

“Anyway, Wolf remembered that Hicks owed him $5, and he said he wanted it right then. Hicks didn’t have it, he’d been gamblin’ and was cleaned out, but he promised he’d get it from the plantation foreman and give it to him first thing in the mornin’.”

“Next mornin’. Wolf told me he was goin’ to see Hicks, he knew he was in this empty house up the road where they always was gamblin’ on Sundays. I was on my way home, a little after that, and just as I come around the bend, as close to that house as here to your car. I saw Wolf backin’ out the door, and Hicks walkin’ towards him. Wolf kept sayin’, ‘Don’t come up on me, man, don’t come up on me,’ and I saw Wolf had a small penknife in his hand. He just kept backin’ up and sayin’ that, and then he stepped down the one step off the porch and Hicks stepped toward him and Wolf's arm just shot out. He got Hicks’ jugular vein, and the blood spurted out to where I was standin’, like from a hydrant, and Hicks, he walked up and down by the fence—there was a fence there just like this—” Shaw acts it out, walking along the fence— “he walked six or seven steps, said, ‘Wolf, you done killed me,’ then he turned, walked three more steps, said ‘Wolf, you done killed me’ and he fell down and bled to death."

We both linger a moment in the spell of his story, standing quiet there by the fence, the only sound the gate’s slow creaking, when Shaw’s more recent past interjects itself. A big wrecking truck with the letters “FAT ALBERT” painted unevenly over its body goes over the curb and starts to move into the dirt beyond, when the driver spots Shaw.

Shaw indicates things are moving along.

“Right on,” calls the white man in the truck, giving the raised fist salute, and drives off behind a hill of dirt.

Shaw is thoughtful for a few moments, then: “You know, I was sayin' to Lou Curtiss the other day, ‘How long does it take for a man like me to be made famous?’ And he said to me, ‘You are famous, you’re cuttin’ records, you’re in Downbeat, you’re in all the music magazines.’ And I said. ‘You mean that’s bein’ famous?’ He says, ‘Yeah’. So I says to him, ‘Well, I gotta get a lot more famous than that.' ” Shaw pauses, looking at the ground, then gazes down Z Street and to the hills beyond. “Yeah, a lot more famous than that,” he says softly.