Whither the San Diego Peace Movement? 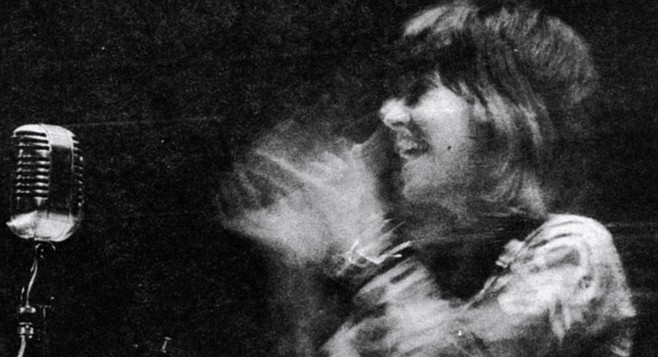 It was back in 1970 at the mostly long-haired White Whale in La Jolla when I got my first peace handshake. My thumb caught him on the palm and he squeezed the tips of my fingers. Our faces both flushed. A quick readjustment to the conventional shake. "Kevin, this is John Cantwell. He's the head of Concerned Officers."

I had heard a few things about anti-war G.I.s but mostly that they were trying to get out of the Navy because they had orders to Vietnam. Highly suspect. I'd graduated from college in 1968 at what I thought was the height of anti-war feeling. We students were right under the thumb of the draft. Lots of anti-war demonstrations my senior year. But even two years later there was Kent State. Students again. An undergraduate up at UCSD burned himself to death in Revelle Plaza that spring. Late in 1970 and in 1971, however, with the advent of the lottery system and the general drop in draft calls, the peace movement in San Diego began to shift, away from the college campuses and toward the military bases.

"I have a stack of membership cards that thick," assured John Cantwell, showing me at least a few inches with his thumb and right finger. "A lot of enlisted men, son."

Sometime early in the spring of 1971, a friend insisted we visit another friend, Will Watford, a UCSD history professor who was big in the peace movement. Watford was busily talking on the phone when we walked into the kitchen of his Del Mar home. His wife, who had gone to private girls' schools (the words "Bryn Mawr" dropped out of her mouth like an accidental piece of saliva), invited us to paint Easter eggs with her. Will got off the phone and rushed into the kitchen. This project of his was going to be really big. I was a little cynical, having seen the drop-off in anti-war feeling on the campus. "No, this is going to be against the Constellation, against the use of aircraft carriers for counterinsurgency. We've got Congressman Ronald Dellums coming down from Berkley; he's going to demand to visit the ship. We'll get the military people themselves involved in the anti-war movement." Five or six months later, all the national media were tramluting this Constellation Project into an outburst of anti-war feeling in military San Diego.

This week, October 1972, I went around to see if I could find out what's been happening to the local peace movement, especially in light of Kissinger's announcement about the cease-fire. Nobody I know is still around. One of the Concerned Officers leaders I knew is back in Washington, D.C. getting a large salary to run an anti-war G.I. office. John Cantwell is national but is "trying to get his head together," I was told. "Couldn't be reached." The person who told me this was speaking from the office of Concerned Military and was very unfriendly; "You can't write a story about the movement unless you're in the movement. Besides, you're ripping us off, like the students who come here to do research for term papers do. They get A's from our work and we never get copies of the papers...Why write about us? Why not write about the great Indochinese victory over President Nixon yesterday?"

But didn't the media say there were concessions from both sides?

"Yeah, but that's not true. Nixon was forced to surrender."

The ex-serviceman and the girl at the Serviceman's Rights Center on lower Fifth Avenue were much more helpful. They explained how the peace movement in San Diego consists of three parts: the student groups, the G.I. groups, and Indochinese Peace Campaign. Over half of the G.I. segment are people on active duty in the Navy, they said. "But a lot of them are guys who get out and go to school and become politically aware."

What's going to happen to this place if the announced cease-fire goes through and there's peace in Vietnam? I asked.

"Well, we're talking about working on the absolution of Article 15 of the Uniform Code of Military Justice, trying to get the offenses turned over to civilian courts." The girl also said that they considered the Vietnam war only a symptom, she expressing cynicism that the "money interests" will never let go of the "tungsten, oil, and rice" of Southeast Asia. I started to question her assumptions about the economic interests, especially about our interest in the rice of Vietnam, but since we had gotten along so amiably, I decided to leave on a friendly note. As we walked toward the street-front door, they offered us a copy of their paper, Up From the Bottom, and told us we shouldn't miss the rally with Jane Fonda Sunday at the Russ Auditorium.

It was kind of like the reception line at a wedding, I told the people in the lobby of the Russ Auditorium. Six different people handed me six different pieces of political literature as I walked up the steps to the building. The people from the Servicemen's Center, sitting at a table piled high with bumper stickers and leaflets pointed across the lobby to a student member of the local movement. The student, an oriental with longish hair and glasses, explained that his group used to be called Stop the San Diego State Railroad, and that it originated around the Peter Boehmer firing controversy at State. ("San Diego State is like a railroad, throwing people off the track.") "The Railroad group has about thirty hard-core members, but it should get bigger as the school year goes on. The McGovern people will be looking for something to do."

Whatever happened to the NVA (Non-Violent Action) group?

"They must be wiped out...I think the members have decided that non-violence is a false issue and either joined another group or became apolitical...the people in the peace movement have become more sophisticated than they used to be."

What about Railroad when and if the cease-fire goes into effect?

"It won't affect us that much; we've decided, regardless of what happens, we're going to concentrate on reform of the university structure."

Two down, one to go, I sighed in relief. Now, if I can only find someone from the Indochina Peace Campaign. The people behind their table in the lobby seemed reluctant to speak for the group and motioned me over to the left side of the auditorium. "Open the door and ask for Norman."

Norman was standing guard duty. "Excuse me if I keep looking around while I'm talking to you, but you've heard of the Yakopec bombing haven't you? Well, we aren't taking any chances. And there's a lot of stuff that's not reported in that police, tire stabbings, firebombs, the Peace House being shot at. What good would it do to report it to the police?" He kept walking around nervously, looking around the auditorium. It turned out that he had been a naval officer on the Ticonderoga, decided "we were on the side of imperialism," and then, he says, the Navy transferred him to Kodiak, Alaska. Norman, though disdaining the claim to being a leader in the Indochina Peace Movement, said "It's an emergency situation; we're trying to make the war the main issue of the campaign...Vietnamization is just an attempt to hide the war." Before I had a chance to question him further, the first speaker of the rally began to talk. I quickly found a chair in the sea of empty seats.

For some reason the program's two and a half hours went very slowly. In spite of the fact that I was curious to what the reaction to last week's events would be, and the evening was theatrical enough (Holly Near of Slaughterhouse Fire sang three or four moving ballads and Jane Fonda is always dramatic), it all seemed so old to me. Eight or ten years is a long time to hold your attention I guess. George Smith, an ex-Green Beret, ex-POW, who claims he's not recognized by VIVA ("rather than buy a POW bracelet, do something worthwhile"), started off in a melancholy tone: "Small crowd tonight. I don't mean to chide you people here, but a lot of people must believe the war is over." He was probably comparing the crowd to last year's Stop the Constellation show, also at Russ Auditorium, which filled the place up. He told about his experiences in Vietnam, as a prisoner, which was pretty interesting if you had never heard it before. I wondered how many of the 200 or so hard-core there had. Holly Near followed George Smith on stage, read some maudlin poetry, juxtaposing quotations from Laotian children against those of American bomber pilots, and finished with several of the most guilt-ridden songs I've ever heard, including one that went:

and another; referring to the travelling Free the Army show:

Between Holly Near and Tom Hayden a girl came up to the stage and said that we have to let Nixon know that he has to sign the peace proposal; we've got to reach people, so buckets will be going around to collect money to pay for more literature to go out this week. I remember what Norman had said about this being an emergency. Of the three segments of the San Diego movement, the Indochina Peace Campaign (of which the speakers were national members) did seem to be the most desperate. Although he sprinkled his talk with some humor ("Jane was in an airplane over Otto when the pilot announced the war was over; everyone stood up and applauded, but no one had said who won."), Tom Hayden voiced the same urgency. We've got to tell the American public who the Thieu regime is, we've got to tell them about the bloodbaths that have started in the prisons in South Vietnam. We just found out about that this morning. You've got to raise your hands in class and stop people on the streets.

In her speech, Jane Fonda chimed in, suggesting people apply for visas to South Vietnam to see the prisons and asking for a show of hands of those voting for McGovern and those working for McGovern. Her pleas were preceded by a graphic description of her experiences in North Vietnam. She told about the bravery of Vietnamese women, hyperbolically describing how tens of thousands of them would march on district headquarters in South Vietnam, and with police shooting at them, the women would ask them, "Why are you shooting at us?" Some of her stuff was poignant, describing a woman who relived her soapy water for her right in front of Jane, some of it a little unbelievable (that North Vietnamese peasants are all familiar with Hemingway, Mark Twain and Steinbeck), but the interesting thing was her obvious recognition that the peace movement had changed. Without a single word directed toward the college student, she spent considerable time talking about sailors, "Last time I was here we were performing a show for the Constellation members...the petition campaign spread like wildfire...the courage of guerrilla sailors is known in other countries." She admonished her audience saying that civilians ought to take advantage of San Diego; the military was how she had learned about Vietnam.

Well, even if the peace movement has gone from the campuses to the military base, I thought, if the war is over, all these people will be going separate ways. The military radicals concerned with military justice, the students with university reform. "So, what about you, Norman?" I asked him after the show. "What's going to happen to the real hardcore people like the Indochina Peace Campaign." He looked at me earnestly. "Well, there's the Philippines. Do you know what's going on over there? Have you ever been to Imperial Beach and asked those UDT's and Seals what they're doing in the Philippines?”