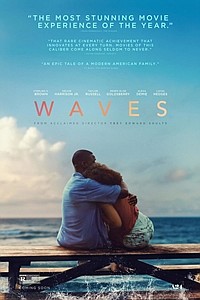 One doesn’t expect to find a continuous 360 degree pan — the type generally associated with a declaration of true love — inside a moving car, let alone at the head of a picture. When, later in his tale of a suburban family in mid-crisis, filmmaker Trey Edward Shults takes another spin of his camera, he does so in a manner meant to amplify, not overmilk, a gimmick. He knows when his characters should speak, but more importantly, he knows when to shut them up and let the camera do the talking. (The exception being a soundtrack more interested in showing off a director’s record collection than underscoring action.) The steep tonal leap from one character arc to another is seamless. And we’re not likely to find a more impressive ensemble this year, starting with Sterling K. Brown as the demanding patriarch who’s in over his head. As his onscreen daughter, Taylor Russell is assigned the unenviable task of playing a kindly character. (She aces the part!) But after biting off one father and son reunion too many, the film that commenced with such a resounding bang ends on a meandering, artificially upbeat whimper.