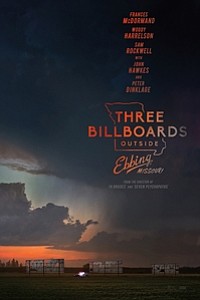 Writer-director-producer Martin McDonagh (Seven Psychopaths) presents the story of a heartbroken but otherwise rarin’ to go woman (Frances McDormand, billy-club blunt) who plasters the titular roadside ads with a direct question to the local police chief: why haven’t you caught the guy who raped and killed my daughter? She’s gotta do something to stave off the feeling that “there ain’t no God and the world’s empty and it doesn’t matter what we do to each other,” and the billboards are close at hand. It doesn’t matter that the chief (Woody Harrelson, laconic) is a good man who is dealing with cancer, or that a violent man-child cop (Sam Rockwell, alarming) is out to stop her. She’s suffered to the point where suffering holds no more terror for her. Yessir, shit gets real. Or does it? For starters, McDonagh works way too hard to inject nearly every scene with his patented solution of acid wit and dark-roast comedy: go ahead, laugh in the face of horror, I dare you. It’s jarringly effective until it starts to feel like shtick, at which point it works only as a numbing agent. For another, his fondness for the outlandish and over-the-top doesn’t mesh well with his effort to tease out the ordinary humanity in his creations. And finally, there’s a serious over-reliance on coincidence and underportrayal of consequence. Good acting, though.

Day-um Lick, can I One-Stare movie have good acting??? Acamando liked it, but to go by her reviews is fifty/fifty.

It certainly can have good acting. One star means there is something there to admire, but not enough for me to call it a successful movie. It will certainly hit certain critics' sweet spots. But the wiseassery left me cold.

I'm guessing the real reason Mr. Lickona gave the movie one star was due to the main characters scathing indictment of a catholic priest in the film comparing the catholic priests to the crips and bloods. Just another gang culpable for the actions of it's more degenerate members making them complicit in the actions certain preachers have committed against altar boys. I find it odd that someone who is a devout catholic and has written a book on the subject would leave that part of the film out of his review. Except that it might more easily display his real motive for giving an excellent, subtle, complex, hilarious, and deeply human film a one star review. The "wiseassery" may have left you cold but your review that dismisses all the subtle nuance portrayed in this film, the volumes of things felt and said in an actors face without a word (good acting, though) leaves me cold. The movie never "feels like shtick", when things start to feel like the characters will continue to perpetrate yet another eruption of violence you see them start to grow and learn and forgive. I'm honestly not even sure what film you were watching.

Um, except the book you mention deals explicitly with the issue of abusive priests, and expresses sympathy for the sentiments you mention from the film.

I am glad there is one reviewer at least who can see through this crap. Yes, McDormand's acting was good. But what a terrible, horrible script, and terrible horrible movie. I am honestly shocked that this has so many good reviews and such acclaim. The nicest comment I can make is: preposterous, and not in a charming or good way.

Saw it yesterday, and I totally agree with the review. Nothing subtle here: Over the top, on steroids. The script reminds me of a promising first draft that needed to be reworked and then slept on, repeatedly, but never was Hollywood meets “fly-over country.” The angry lines seemed forced to me. For great acting while delivering angry lines, check out Jack Nicholson in “Five Easy Pieces.” 3BOEM was crap, and that so many critics hail it as great art is rather disconcerting. Thanks for having the integrity to say what you did.