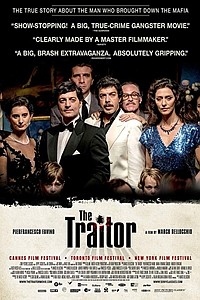 Show me a classic cosa nostra saga that doesn’t affirm the importance of family and... well, I submit the latest from Marco Bellocchio. Tommaso Buscetta (played with rumpled aplomb by Pierfrancesco Favino) had no use for the term “mafia;” to his way of thinking, it was a non-existent appellation cooked up by a media eager to sell tabloids. Not looking to command, the simple Sicilian soldier was the first to turn pentito (informant), explaining to the courts the inner workings of the Italian underworld. The film’s centerpiece is Buscetta’s testimony in the second Mafia trial against mob chieftain Salvatore Riina (Nicola Calì). If we are to be stuck in a courtroom for any prolonged period of screen time, may the minutes pass in visual resplendence. The “all talk and no show” appearance that casts a pall over many courtroom dramas is nowhere to be found, due in large part to the stage set by production designers Andrea Castorina Jutta Freyer and Bellocchio’s staging within it. The courtroom drama proved a tough second act to follow. An air of stylization over glamorization lingers throughout the picture, but at 145 minutes, the last third dragged on a bit.