The Kid Who Would Be King 4.0 stars 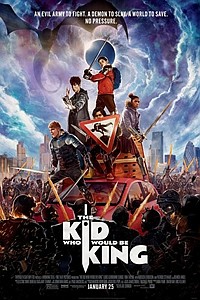 Everything one could ask for from a contemporary sword and sorcery adventure and more, this live-action retelling of the Sword in the Stone legend has the feel of John Boorman’s Excalibur were it written for today’s YA market. New kid in school Alex Elliot (Louis Ashbourne Serkis) comes across a playground fight and takes it upon himself to bulldoze a pair of bullies. This forms an alliance between our four Knights of the Round Dining Room Table whom, along with a backward-aging Merlin played at various times by Angus Imrie and Sir Patrick Stewart. Imrie is a human windsock of a lad who brings an ineffable brand of bewitchery to the character. Together they must defeat a medieval sorceress on her own turf, lest Britain knuckle under to eternal slavery. Why the studio is dumping this in January rather than waiting to roll it out a major summer release is obvious. It’s too good. Written and directed by Joe Cornish (Attack The Block).

I will say that the TV ads for this stink, because the idiots at the studio want to burn this film off.