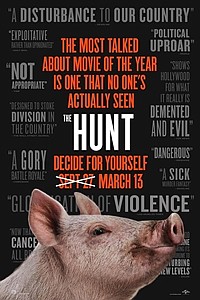 Trump supporters are dropped in the middle of Arkansas, armed, and left to fend for themselves against a group of human-hunting liberal democrats. A spoiler alert might normally have been in order, but instead of adding an air of mystery and bolstering suspense by withholding any mention of political affiliation until an hour into the picture, Craig Zobel (Compliance) and the Blumhouse brats tip their hand early on: the word “deplorables” is splashed across the screen before the opening credits roll. So much for subtlety. Even the cameo killings - no matter how big the celebrity name, their time on screen can be short — got old. Every word of satire in this cavalcade of torture porn is spelled out so that even the lowest-grade moron in the room can get in on the laughs. The filmmakers play the most dangerous game of all: talking down to the choir. So much so that their target audience and Trump’s deplorables appear to be one and the same.