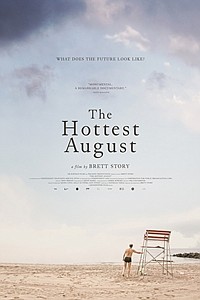 In an egregious example of shoot-now-figure-it-out-later filmmaking, documentarian Brett Story spent the month crisscrossing the five boroughs of New York, asking regular folk to comment on the future. It would have taken some doing to find a less engaging group of interview subjects. Or is it the lack of time we're allowed to spend with any one individual that minimizes interest? The subject most frequently turns to climate change, but not enough to qualify this as ecocentric. A few of the interviewees reappear, but not long enough to make a significant impact. Artfully composed bridging shots are held just long enough for the viewer to think that something is about to happen, but it never does. And August 2017 was not the hottest on record. Not even close. If one can’t get the title right, what chance is there of everything else falling into order?