The Edge of Seventeen 2.0 stars 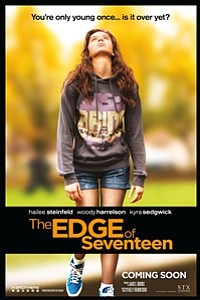 Writer-director-producer Kelly Fremon Craig’s The Edge of Seventeen offers a verbally frank take on the horrors of adolescence — difficult parents, difficult siblings, difficult romantic interests, and even difficult best friends — gentled just enough to provide solid entertainment. (Especially if you liked John Hughes’ teen oeuvre.) An illustration: when star Hailee Steinfeld breaks in on her favorite teacher (an appealing Woody Harrelson) during his lunch hour and declares her intention to kill herself over her mountainous pile of woes, it isn’t quite played for laughs, but it’s also clear that he doesn’t take her threat seriously, and so neither should we. The story is also largely purged of the unreal/hyperreal realm of social media; we get a hint of cyberlonging here and an accidentally sent text there, but Screenworld is no kind of dominant, omnipresent force. So it’s no surprise when the protagonist refers to herself as an old soul, recalls her best friend being dressed like an old man when they first met, and declares to a would-be suitor that when she looks at him, she sees an old man. It's a snapshot of the kids of today, overlaid with the filter of a somewhat more grownup sensibility.