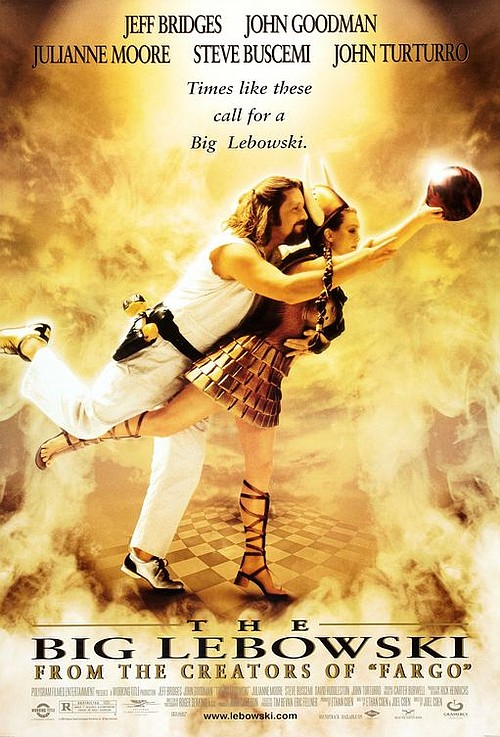 There are actually two Lebowskis, a big one and a little one, a multimillionaire philanthropist and a lazy, laid-back bowler, both christened Jeffrey; and when the latter — who prefers to be addressed as "the Dude" — is mistaken for the other by a pair of dim-bulb thugs, he is pulled into an apparent kidnapping plot of rapidly deepening complexity: "a lot of ins, a lot of outs, a lot of what-have-yous." The Coen brothers, writer-director Joel and writer-producer Ethan, are here having fun with, among other things, complexity per se. Fun with the very idea of complexity. Fun with the concrete and mountainous evidence of complexity. And one of the richest sources of fun, played off in the sharpest contrast to complexity, is the glorious spectrum of stupidity on exhibit: the dope-addled but gropingly rational Dude (Jeff Bridges); the big lug who is always absolutely sure he is right in spite of the fact that he has never been right yet (John Goodman); the woolgatherer who falls behind in the slowest of conversations (Steve Buscemi); the several teams of hired "muscle" (all brawn, no brains), one team of which are self-styled Nihilists; the nympho bimbo; the adolescent joyrider who afterwards forgets his corrected homework ("Use a dictionary," "Spelling") in the abandoned car. The complexity is no illusion. It is right there in front of us in frightening and multiplying detail. It brutally illuminates the stupidity. And at the same time it forms the philosophical foundation for a broad and accepting, if aloof and frosty, view of humankind. The Coens — who better? who else? — are able to make wonderful sport of deadbeats and boneheads from the high ground of diligence and ingenuity. They never play "down" to the audience. They demand effort and intelligence, and they reward these by the truckload: lively characterizations, flavorful dialogue, dense atmosphere, clever and convoluted plotting, rich and well-developed themes, abundant allusions, "in" jokes, grace notes, and red herrings, each element teamed with the others in common purpose. Julianne Moore, David Huddleston, Sam Elliott, Peter Stormare, Ben Gazzara, John Turturro, Jimmie Dale Gilmore.